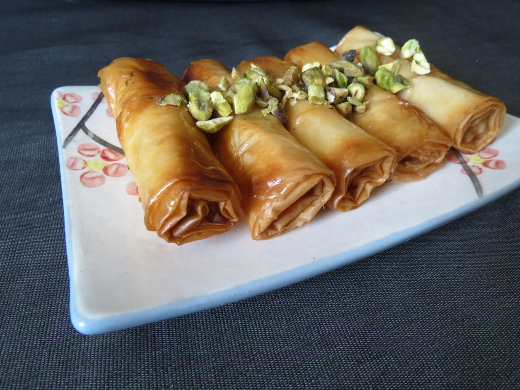 I've tentatively joined a new cooking club! This one aims to select a different cookbook for each potluck gathering. Yet the first feature was Ottolenghi & Tamimi's Jerusalem. It's not a stretch from my other club's driving theme, and I borrowed the book from a generous Ottolenghi clubmate.

I also stuck to my well-worn dessert-making groove. Jerusalem has a couple of fabulous-looking orange cakes that would likely travel well, but I ultimately preferred to try my hand at the sweet filo cigars. They're stuffed with sweetened ground pistachios and almonds, fried, and then dipped in honey.

I got an excellent head start the night before, preparing the nut filling as my dinner baked and wrapping it in filo in front of Netflix. Things went awry and I really started swearing at fry-time later that evening: the cigars' stubborn, asymmetric centre of mass meant that they wouldn't turn over in the oil; one or two even burst their filling. The next morning, I felt a bit calmer and the job at hand felt more feasible. All except the first three cigars were nicely browned, not too greasy, and their weirder edges softened in their honey dunking.

With an egg and lots of honey involved, this recipe is far from vegan. I reckon conversion wouldn't be too difficult, though - I'd try skipping the egg entirely, perhaps adding a dot of margarine or olive oil to the filling and sealing the cigars with water. Honey could be replaced with diluted agave nectar, or a heavy sugar syrup with a drop of orange blossom water.

These cigars were the short, sweet end that our sprawling lunch needed. They're more filo than filling yet the ground nuts, brightened with lemon zest, shine through. I used orange blossom honey, and we could also discern its floral scent. The overall effect is soft, layered and very, very sugary.

Delightful as they were, this is probably just a one-off recipe for me. I live so close to Sydney Rd, where similar Lebanese pastries are cheap, abundant, and fried by someone else. Instead I'll save my filo folding for bougatsa me krema.

Blend together the flaked almonds and 60g of the pistachios in a food processor, to form a coarse powder. Tip the ground nuts into a small-medium saucepan, add the sugar and 4 tablespoons of water. Set them over low heat and cook for about 4 minutes, until the sugar is dissolved. Turn off the heat and allow the mixture to cool a little. Separate the egg. When the nut mixture is just lukewarm, whisk in the vanilla, egg yolk, and lemon zest.

Unravel the filo pastry and use just one sheet at a time. Drop a generous tablespoon about 2 cm away from a short side. Fold one long side up to cover it, then the closest short side, then the other long side; roll up the filling to form a cigar shape, sealing the egg with a little brush of egg white. Repeat with the rest of the filling, making a dozen or so cigars in total.

Pour the peanut oil in a medium saucepan to about 2cm depth.  Bring it to medium heat. Fry the cigars on two sides, in batches, until they're golden on both sides. (The original recipe thinks this will take 10 seconds per side, but it was double that for me.) Cool the cigars on absorbent paper.

Place the honey in a small saucepan with 1 tablespoon of water. Set it over medium heat, stirring together the honey and water until they're well mixed. Turn off the heat and drop 2-3 of the cigars into the saucepan, turning them to coat them in the honey and letting them sit for just a minute each. Pull them out and place them on a serving dish or in an airtight container.

To serve, roughly chop the remaining pistachios and sprinkle them over the cigars.