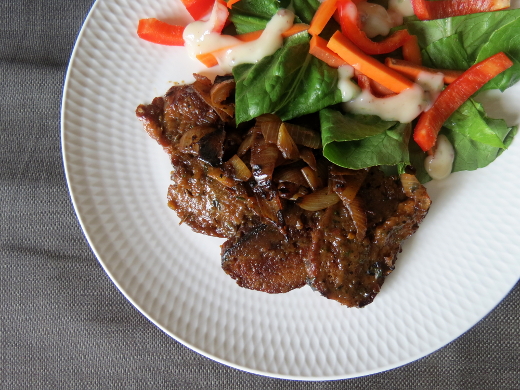 After a gloriously sunny autumn, Melbourne finally turned on some cold weather on the weekend and gave us a good excuse to cook up some wintery comfort food. We dug out Street Vegan and tweaked one of their sandwich recipes into something we could serve with veggie box salad. There are a heap of interesting takes on tempeh and seitan in the book, but it was this bourban-glazed seitan that caught my eye.

It's a fairly involved recipe - you've got to make seitan first (we used our new favourite recipe), marinate it and then slow-cook the onions and fry up the seitan. I was a bit over it by the end, but it was just about worth the effort - the glazed seitan in particular is outstanding, with a sweet and smoky richness that's pretty hard to top. The onions were good, but maybe not good enough to justify the effort involved - a long, low fry-up with a splash of liquid smoke would probably work almost as well.

The original recipe has a complicated aioli as well, but we just stirred some lime juice and chipotle pepper into some mayo and dressed our salad in it.

Bring 1.5 cups water to the boil in a small saucepan. Add the tea leaves, turn off the heat, and cover the saucepan. Let the tea steep and cool for 20 minutes.

Strain your tea into a blender and add the olive oil, tamari, oregano, paprika and mustard. Blend on high speed for a minute or so, until it's emulsified.

Slice the onions into thin strips. If you want them softer and have some marinade left you can do what we did and fry the onion over high heat for another 10 minutes or so, cooking the marinade off completely.

Onto the seitan! Heat 2 tablespoons of olive oil over medium heat. Throw in the sliced onion and stir-fry for five minutes or so until the onions are cooked through. Throw in the chilli flakes, raisins, thyme and brown sugar. Cook, stirring for 2 minutes until the sugar dissolves.

Stir in the bourbon, miso, rice vinegar and two cups of water. Bring to the boil and then turn off the heat, stick a lid on it and leave it to cool for 20 minutes. Once it's cooled off enough, blend the marinade into a thick liquid.


Heat the remaining olive oil over high heat in a cast iron frying pan. Throw in the seitan and fry, stirring frequently, until it browns up nicely. Pour over the marinade and cook it off - it should take another five minutes or so, caremelising nicely.


Serve the seitan, topped with the onions and with a salad and some tangy mayo alongside.
Posted by Michael at 7:25 am