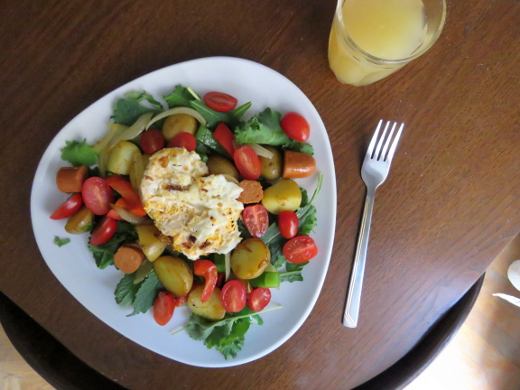 In Stockholm Michael's been living in a cute airbnb lined with books. The kitchen is small but handy, and a much cheaper alternative to eating out. There's a supermarket just across the street. On my first full day in town he set off to the university and I stayed in to do my own work, agreeing to organise dinner.

I noticed that Michael had a packet of mock chorizo sausages in the fridge. They inspired me to do something I don't do often at all - look up recipes that contain meat. A page on BBC Good Food gave me a pretty good idea of what omnivores tend to do with chorizo. The recipe that most appealed to me seemed intended for brunch. It's a simple but substantial saute of baby potatoes, capsicum, onion and chorizo, all topped with a fried egg. It reminded me of the fabulous hashes served up at Smith & Daughters.

Since we didn't need to eat all four serves straight up, I did all of the chopping and potato-boiling but held over half the ingredients for a later meal. My fried eggs were ugly but did the job. I added some mixed greens and cherry tomatoes to the plate for some extra freshness, and the greens wilted nicely on contact with the sauteed vegetables. The chorizo played a pretty minor role in the end, but I like its spiciness and was glad for a colourful, vege-filled plate.


Chop the potatoes into bite-sized pieces. Place them in a saucepan and cover them with water. Boil the potatoes until tender, about 15-20 minutes. Drain the potatoes.

Cover the base of a large frypan with a thin layer of olive oil. Saute the onions until soft. Add the capsicums and continue to saute until the capcicums are soft and the onion is beginning to brown around the edges. Tranfer the capsicums and onion to a plate and return the frypan to the heat. Add the potatoes and chorizo to the pan, allowing them to brown a little before turning them. When the potatoes and chorizo have developed a crust that you like, add the capsicum and onion back into the pan for a minute or two. Add salt and pepper to taste.

Share the green leaves between four plates and top them with the sauteed vegetables and chorizo. Distribute the cherry tomatoes across the saute. Fry the eggs and put one on top of each plate. Serve.
Posted by Cindy at 4:29 pm