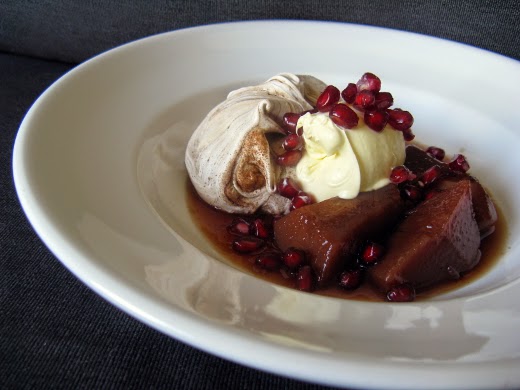 At the end of April, we hosted the fourth gathering of Ottolenghi admirers in our home. Without a bike ride constraining our cooking choice, Michael and I committed to preparing the extravagant mushroom and cheese lasagne from Plenty as the autumnal centrepiece. But of course I couldn't leave dessert alone, flicking through Plenty More and jotting down simple rhubarb and quince options on the end of the shopping list.


The quinces won out in the end. You probably already know how to poach them, and I've done it before too. The vanilla, orange and star anise in the poaching liquid here aren't anything surprising, but using pomegranate juice instead of water is a very Ottolenghi tweak. It lends a deep crimson to the dish where the quinces can't - they're poached for just 20 minutes and retain the translucent colour of a pear on the inside.


On their own, the quinces are rich, velvety, vegan and gluten-free. Ottolenghi serves them with clotted cream and pomegranate seeds, and ours were embellished further with cocoa-streaked meringues made by our guest Matt. He and I had unwittingly teamed to create some rather fancy deconstructed pavlovas.


Peel the quinces and slice them into quarters. Cut away the cores and keep half of them. Slice the quince flesh into wedges and place them in a very large saucepan. Wrap the reserved cores in a muslin cloth or similar (I used a clean Chux wipe) and bundle them up firmly, adding them to the pot. Pour over the pomegranate juice and sprinkle over the sugar. Slice the vanilla pod lengthways, scrape the seeds into the pot and drop the pods in too. Grate the rind of the orange into the pot, then juice the orange and pour the liquid in. Drop in the star anise. Bring it all to the boil, cover the pot and reduce it to a gentle simmer for around 20 minutes, until the quince is soft. When the quince is ready, use a slotted spoon to retrieve the wedges. With the pot uncovered, simmer the syrup for a further 20 minutes to reduce and thicken it.


When it's time to serve the quinces, remove the core bundle, vanilla pods and star anise from the pot. Place the quince wedges back in the syrup and gently warm them. Spoon the quinces into individual serving dishes, dollop on some cream and sprinkle over the pomegranate seeds.
Posted by Cindy at 6:46 pm