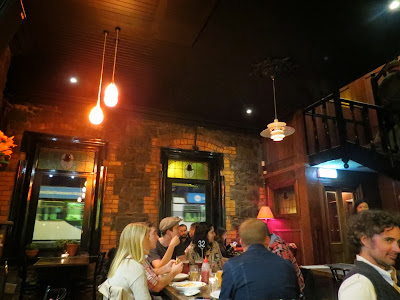 The previous incarnation of The Gasometer, which we loved enough to blog ten times, closed unceremoniously late last year. It reopened last week under new management, boasting some minor renovations, a new menu and a couple of bands that piqued our interest.


The front bar hasn't changed much at all, until you take a close look at that menu. It's got vegetarian, vegan and gluten-free labelling that starts strong in the starters and mains but peters out confusingly as the list moves on to sides, desserts and kids' options. There's none of the mock meat Americana we knew and loved, with vegans apparently restricted to the mushroom and walnut tacos (and presumably the green salad and chips). There are a number of other vegetarian items, including potato and leek pierogi ($12/22), eggplant croquettes ($12), a lentil burger ($18), and lentils with roti ($18). 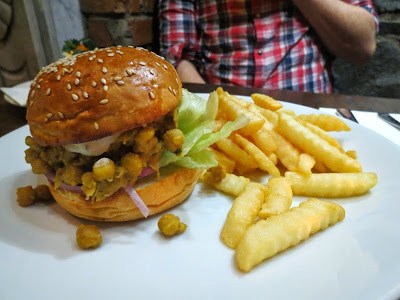 Michael had a shot at the Double Sandwich ($17), a tiny and inexplicably named brioche bun stuffed with a nice chickpea curry and yoghurt sauce. (P.S. the name has been made explicable by Hannah in the comments.) The portion of crunchy crinkle-cut fries was more generous. 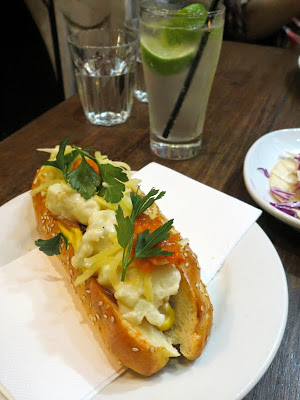 Meanwhile I tested out the cauliflower hotdog ($14): another brioche bun, this time stacked with caramelised onion, cauliflower in a creamy sauce, cheese, hot sauce and parsley. It was an excellent combination of flavours, but didn't evoke a hotdog at all. 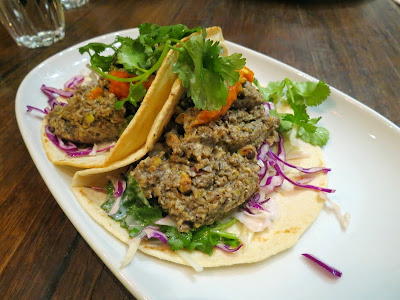 Finally, Michael and I shared a pair of the vegan mushroom and walnut tacos ($12). These ingredients had the potential to form a satisfyingly savoury mince-like texture but were taken to almost the puree stage, to my mild disappointment. The tacos were under-seasoned too: a little more salt and lime juice would have really livened these up.


So it seems that the Gasometer is no longer the punky, vegan haven of yore. As a vegetarian I'd try more of the menu, but it'll take another really good dish or two for this venue to climb its way back into our favourite pub shortlist. Scheduling a few more gigs like this one wouldn't hurt their cause either. 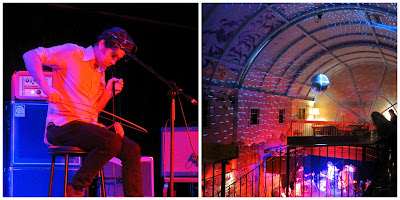 
Accessibility: The Gasometer has a small step on entry. The tables are crowded in some areas but the booths and tables closest to the entry are relatively spacious. Ordering and payment occurs at a high counter. Male and female toilets are on the same level as everything else but are not particularly spacious.
Posted by Cindy at 7:49 am