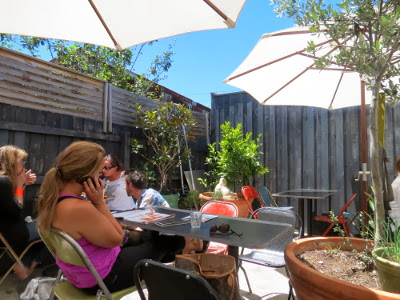 We thoroughly enjoyed our first visit to Little Deer Tracks soon after they opened, though we hoped that they'd introduce a few more explicit vegan options. We didn't intend to leave it two and a half years before returning, but there you have it. Some recent commentary from blogging and facebooking vegans hinted that their options had expanded, so we made sure to stop by for lunch on a weekend trek up to Bunnings.


While I remembered the simple and slightly serious interior of the cafe, the back courtyard had an entirely different atmosphere with ramshackle plants, rickety chairs, a fanciful mural and plenty of shade supplied by umbrellas. Mains still hover around $15-20 and have a Mediterranean bent - there's pasta, gnocchi three ways, risotto, frittata, fetta fritters, haloumi salad, eggplant cutlets, and no tofu to be seen anywhere.


Although there's a small note about gluten-free bread and a mention that the pancakes are vegan, you're otherwise left to yourself to figure out which dishes might or might not fit your dietary needs. Thankfully the staff are lovely and appear to be on top of the menu - when I asked about veganising the burger, our waiter happily offered to switch the cheese for avocado and assured me that the rest was good to go. 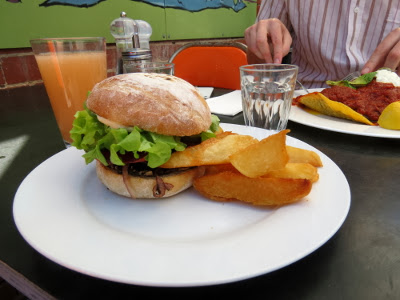 The burger in question ($16.50) goes for the portobello mushroom as patty and is filled out with grilled onion, pickles, beetroot, tomato, lettuce, cheese/avo and vegan aioli. It looks compact for all that but, oh, is it messy! From first bite, the mushroom and beetroot steadily dripped a crimson puddle through my fingers and onto my plate. The bun was sturdy enough to hold the fillings together, but it ended up contributing to the mess, being the heavily floured sort that left me feeling dusty and checking with Michael what I might've left on my face. This tasted great but I wouldn't embark on it again without packing some wet wipes.


The potato wedges were thick, skinless and super-crunchy, and you can order a bowl of them ($6.50) if you're not game to take on The Burger That Will Stain Your Face And Clothes. 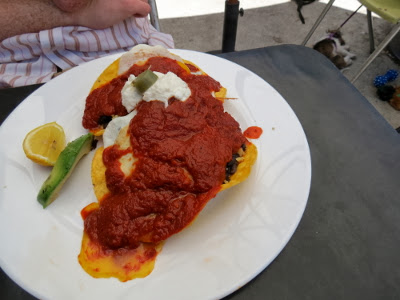 Michael had a saucy shirt-stainer of his own in the Huevoes Rancheros ($17.50, a rare departure from the Mediterranean theme). The crunchy taco shell base required some careful maneuvering, but he confirmed that there were eggs, beans and cheese under the salsa and sour cream, though not as much avocado as he would've liked. 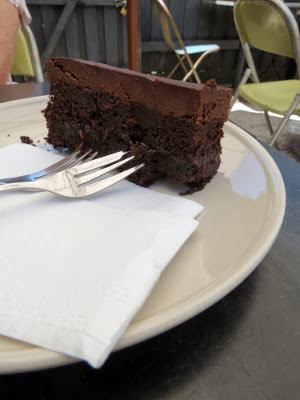 After the savoury battle was won, I asked after the desserts I'd noticed in the cabinet. It turns out that the chocolate mud cake ($6.50) was both vegan and gluten-free. It was impressively light and moist for its flourlessness, with a terrific layer of berry jam through the middle and then a near-solid centimetre of chocolate on top.


Though we battled to stay clean and dignified (especially in the company of a tiny puppy, see if you can spot him in the photos above) we weren't offput by out meal at Little Deer Tracks. It's just about worth getting your hands dirty for stuff that tastes this good, and the staff and setting are charmers.


You can read about our first visit to Little Deer Tracks here. Since then it's received positive reviews on Green Gourmet Giraffe, Green Chic, Suburban Culinary Adventures, Ballroom Blintz, The Good Hearted and vegawesome!; bloggers at EAT AND BE MERRY, FOR TOMORROW WE DIE(T) are more ambivalent.
____________


Accessibility: This cafe has a flat entrance. The furniture's moderately crowded but reader Marilyn has reported that it's possible to get a wheelchair through to the back tables. The floor is a little uneven but ramps have been set up at the small steps. We ordered at our table and paid at a high counter on our way out.
Posted by Cindy at 2:48 pm