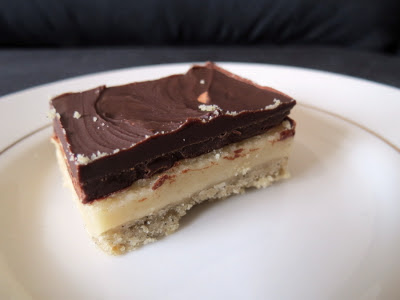 I recently took part in a baby shower for K. I'm an old hand at cooking for this vegan coeliac and so pitched in with the catering, stirring up a triple batch of chai candied pecans then trying my hand at spabetti's chocolate tahini shortbread. This is a clever cousin of caramel slice, where a thick tahini icing replaces the usual milky middle layer. It's at least as rich and sweet with that grown-up, slightly bitter edge of sesame seeds.


I had some minor mishaps with the recipe. For starters, one is instructed to 'press' the cookie base into the baking tray. Mine was too mushy with margarine for pressing. I spread it with the back of a spoon as best I could, and snuck it out of the oven mid-bake for some extra smoothing. The finished slice wasn't the sleekest slicer, either - the tahini caramel only partially supported the chocolate, which slipped this way and that under my knife. My servings looked nothing like the neat rectangles of spabetti's batch (the picture above is of my single tidiest piece). Given my previous experiences with more traditional caramel slice, I wonder if some heat would help set the tahini layer.

Tidy or not, it's damn tasty.


Tahini chocolate slice
(slightly adapted from a recipe at spabettie)


Preheat an oven to 180°C. Line a small baking tray with paper.


Start with the base layer. In a medium-large bowl, beat together the margarine and brown sugar until thoroughly combined and fluffy. Beat in the vanilla paste, then the flour until well mixed. Spoon the dough across the base of the baking tray, smoothing it over as best you can. Bake for 12 minutes, or until set and golden. I removed mine at the 5 minute mark to smooth the base over further before completing the baking. Allow the base to cool.


Clean off your beaters and bowl to make the caramel layer. Beat together the tahini and margarine until thoroughly combined. Gradually beat in the icing sugar; the mixture will probably form coarse crumbs. Beat in just enough soy milk to bring the mixture together to a thick icing. Spread this tahini caramel over the base as evenly as you can, cover the tray with foil and place it in the fridge.


Finally, the topping. Gently melt the chocolate and margarine together in a saucepan. Retrieve the slice from the fridge and pour the chocolate over, spreading it as evenly as you can. Return the slice to the fridge for several hours, preferably overnight, before slicing and serving.