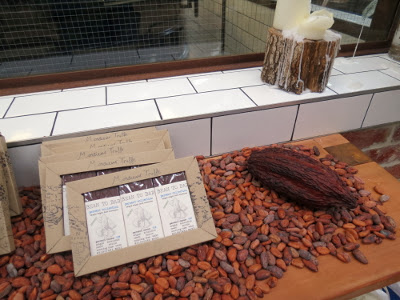 We have long been fans of Monsieur Truffe chocolate, and even as L'Atelier has transitioned to East Elevation and Thibault Fregoni has moved on, the Lygon St factory is more active than ever. Head chocolatier Jade Bentley has been working hard on her bean-to-bar project, which you can read about in more detail in this Broadsheet article. 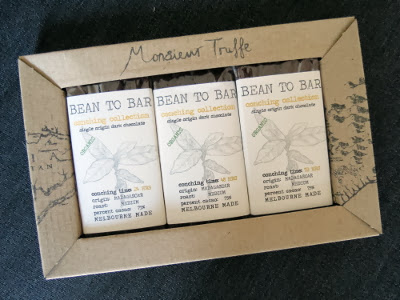 We picked up a sample of her conching collection after our recent EE brunch. These three 25g bars are all 70%-cocoa solids Madacascar-origin dark chocolate but the chocolate has been conched in-house variously for 24, 48 and 72 hours.

Conching is a process by which the chocolate mixture is churned at a constant temperature, refining the mixture to a smoother texture and reducing acidic flavours. The 72-hour bar had an almost waxy bite, which Michael preferred, but I tended towards the more complex flavours of the 24- and 48-hour bars. 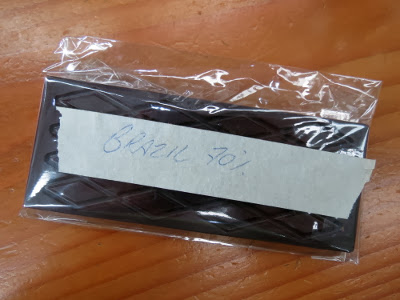 Jade happens to be a friend-of-a-friend, and she kindly offered us a taste of her upcoming series of bars using Brazilian beans. This chocolate was stunningly dark and smoky, and we'll definitely be seeking out more when it's available for sale.
Monsieur Truffe's dark chocolate and many of their other products are vegan (you just have to keep an eye on the milk chocolates and some of the add-ins, but ingredients are always clearly marked). They're pricier than an impulse-bought supermarket block, but their quality and nuance can barely even be measured on the same scale. It's a treat to to witness such a wonderful product being churned up (I mean, conched!) just down the street.
_____________
While we know Jade personally, we've been Monsieur Truffe fans before she was even employed by the company! We don't think the personal connection has unduly influenced our opinion, but take our opinion with whatever quantity of salt you like. We have paid for at least 90% of the Monsieur Truffe chocolate we've consumed, including the conching collection above.
_____________
Monsieur Truffe
351 Lygon St, Brunswick East
(also in Collingwood and stocked elsewhere)
9380 4915
http://monsieurtruffechocolate.com/