Update 31/12/2014: The Sporting Club has renamed itself The Charles Weston Hotel. Very little seems to have changed otherwise. 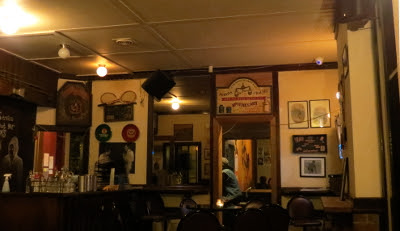 We're increasingly going with repeat visits when we catch up with our pub-club posse - after ticking off thirty-two different pubs it's getting harder to keep things fresh. We'd heard rumours of a new menu at The Sporting Club, which was close enough to a new pub for us, so we headed off to check it out on Sunday night. It's a lovely pub - a cosy front bar, plenty of dining space and (when the weather's warmer) a few little outdoor spaces.

The menu is more veggie friendly than ever before - the majority of the starters are vego and there are seven different main meals to choose from, including wild mushroom parpadelle ($14), eggplant kasundi curry ($17) and a crumbed haloumi burger ($16).

We turned up early and munched our way through a serve of their decent shoestring fries with aioli and tomato sauce ($7) while waiting for the whole gang to turn up. This left Cindy unable to face the idea of a main-sized meal and, so she headed into the starters section of the menu, opting for the veggie chilli and cornbread ($9). 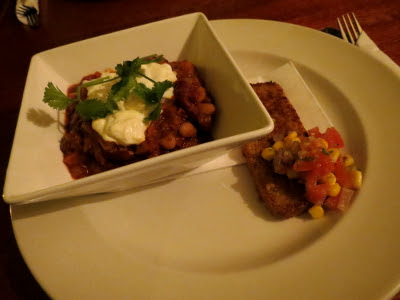 This was an incredibly generous $9 serve of chilli, although it felt a bit like they could have upped the cornbread a little to go along with it. The chilli was tasty enough - spicier than expected and with some nice smokiness, filled with a good mix of beans and veggies and a sour-cream/coriander garnish. The cornbread was a thin and crispy version not ideal for soaking up the sauces, but pretty great on its own.

I decided to sample the one explicitly vegan (and gluten-free!) main on the menu: sweet potato shepherd's pie with pea puree and iceberg lettuce ($16). 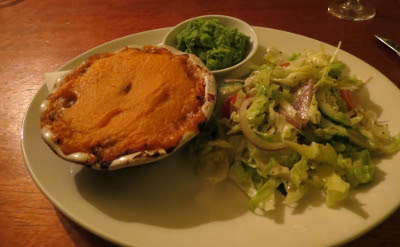 This was better than a vego shepherd's pie had any right to be - the filling was a simple but comforting stew of lentils, veggies and an oniony-gravy, while the topping combined fluffy sweet potato and the mushy peas perfectly. I need to eat more mushy peas I think - I always forget how great they are. The side salad didn't really rock my world - I've become a bit of a snob about iceberg lettuce it seems.

I was chockers after my pie, but Cindy miraculously rediscovered her hunger when she realised she had a shot at dessert. They've only got one option - sticky date pudding with caramel and vanilla pod sauce and ice cream ($7). 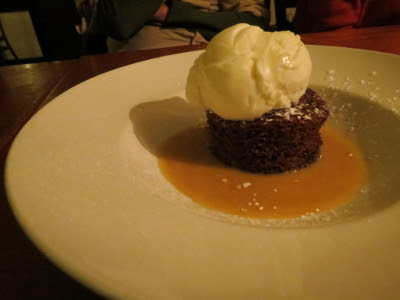 I'm not a huge fan of sticky date pudding, but Cindy seemed pretty happy with the Sporting Club's version - the pool of sauce and the big dollop of ice cream obviously helped seal the deal.

With each visit to The Sporting Club I've grown more and more enamoured of it. The menu is getting increasingly veg-tastic and the food is of a pretty high standard - everybody at our table of 12 was impressed. The staff are friendly if a little harried - there were problems with the interface between the bar and the kitchen on Sunday night, but they served up some free drinks for those of us who wound up with overlong delays on their meals. It's not quite my favourite pub in Melbourne, but it just might sneak into the top 5 (current rankings: Fox, Gasometer, Napier, Rainbow, Sporting Club).

Read about our previous trips to The Sporting Club here and here.

Accessibility: The Sporting Club has a flat standard-width entry and plenty of space inside. Ordering and payment takes place at the bar, which in our experience can be very loud. The toilets were easy to get to but were just ordinary sized cubicles for men and women.
Posted by Michael at 7:17 am