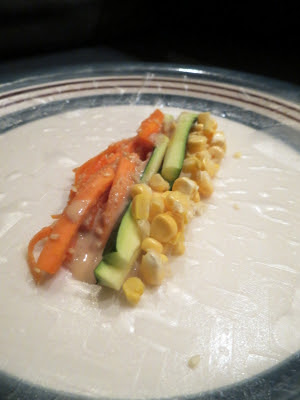 The terrific rice paper wraps I ate at Vina in Sydney inspired me to pull out a spring roll recipe from My New Roots that I'd bookmarked a while ago. It really smashed through our vege box, clearing two carrots and a sweet potato as written and allowing us to sneak in zucchini and corn as well.


The carrots and sweet potato are chopped into matchsticks and lightly sauteed in garlic, ginger and agave nectar, then showered with sesame seeds. This was sufficiently punchy to work in the zucchini and corn without any extra seasoning. Sarah bases her dipping sauce around almond butter but we had better luck locating cashew butter and no regrets.


With these wraps being so fresh, they were impossible to dip into the cashew sauce with dropping half their contents into the sauce dish. I tried wrapping the sauce into the rolls (pictured above), but actually preferred spooning the sauce directly onto each mouthful as I ate.

The recipe below recounts what I used this time around, but the fillings and sauce are both highly suited to adaptation based on personal taste and what's on hand. 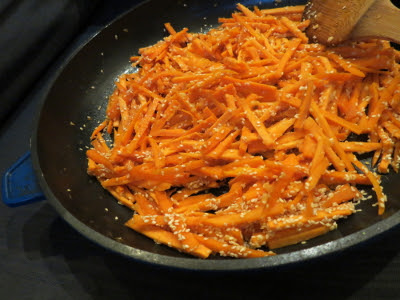 
Gently toast the sesame seeds in a frypan, then set them aside.


Julienne the sweet potato, carrots and zucchini; shuck the kernels from the corn.


Heat a little oil in a frypan. Add the ginger, garlic and agave sauteing for a couple of minutes. Stir in the sweet potato and carrot, coating them in the flavour mix. Cook, stirring, for 3-5 minutes until the vegetables are heated through and no more than a bit wilted. Take the pan off the heat and sprinkle over the sesame seeds and lemon juice. Set the pan aside.

Whisk together all of the dipping sauce ingredients, adding more water to thin the sauce out if needed.


Fill a separate frypan with water and heat it until the water bubbles. Turn the heat off. Take a rice paper wrapper and dip it in the water, rotating it around until all of it has been submerged and softened, then place it on a plate. Arrange a thick line of the carrots and sweet potatoes, then a few zucchini matchsticks and a trail of corn kernels down the centre of the wrap. Fold in the short sides, then roll the long side through (if you haven't done this before, there are some helpful photos on My New Roots). Repeat with the remaining wrappers and filling, or have everyone make their own at the table. Spoon the cashew sauce generously over the rolls.
Posted by Cindy at 7:54 am