06/04/2013: We just saw in this comment that Marmalade & Soul is 'closed until further notice'. You might want to call ahead before attempting to visit.
08/04/2013: Further evidence on fitzroyalty. 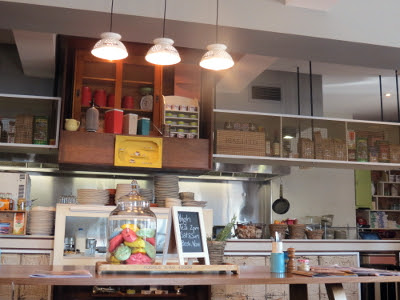 I've been wanting to visit Marmalade & Soul since I saw house-made poptarts on their breakfast menu. We've been slow about it and they're no longer offering those poptarts, but they've still got a clear predilection for the sweet stuff. The current breakfast menu boasts a breakfast trifle, banana split (of sorts) and French toast, plus fruit salad, summer porridge and pancakes on the specials board. I was overwhelmed! 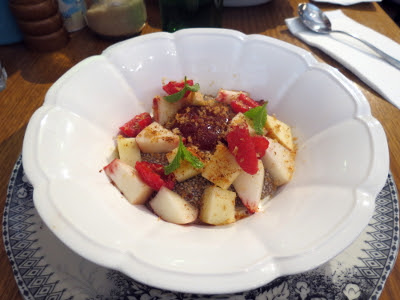 There's a bunch of savoury stuff too, but it's pretty meaty - the one exception is whipped egg served with portobello mushroom, ricotta and gremolata ($16). I was surprised to see Michael pass over it and submit to sweet, ordering the 'summer porridge' ($14), actually a chia pudding with fruit, nuts and hung yoghurt. In turn, staff were kind enough to serve it banana-less on Michael's request. Though chia seeds are a novelty for us, Michael's main comment was that this was small, and I think he demolished it in just five or six spoonfuls. 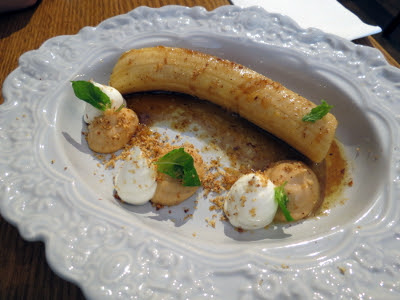 Meanwhile, I was discovering why they list 'banana split' ($14) in quotes. Not only does it lack icecream (fine by me at breakfast), the banana isn't even split! It is beautifully caramelised, with more sweet dark butter pooled underneath it, and it's served with piped globs of peanut butter custard and creme fraiche, shaved walnuts and mint leaves. The mint really didn't work for me here but was easily set aside, otherwise it was a lovely dessert. For me, it was too small and too rich for breakfast, especially at that price. 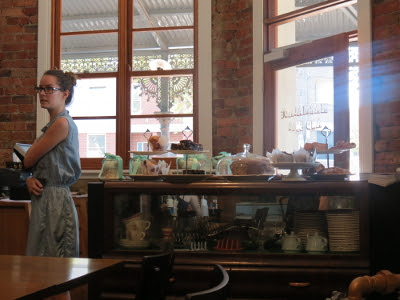 The meaty savoury breakfasts looked much heartier, though they haven't always been positively reviewed on other blogs. Many dishes (including the savoury veg one) are unusually toastless, which didn't fuss me too much, until I noticed that toast and other optional extras incur a $5 charge each on top of a $14-17 breakfast! That well exceeds my willingness-to-pay at breakfast.


While Marmalade & Soul's approach to breakfast doesn't seem to suit us, I'd go back to splurge on afternoon tea - they project a special affinity with sweets and my dish was certainly well executed. We liked the atmosphere - it's spacious and seems accessible and the staff were attentive, while the interior design teams bare walls and simple furniture with vintage baking fripperies. There must be some way we can get along!
____________


Marmalade and Soul has had a mixed reception! Most positive are The Glutton and the Lush, GastronoMel, Melbourne Mum, off the spork, where food is (twice), Lot of Cravings and I'm So Hungree; feelings are more conflicted on MEL: HOT OR NOT, two munch, dining nirvana, Melbourne Dining Experiences, fitzroyalty, LAURENBRUCE and Oysters & Oxtail.
____________


Accessibility: There's a small step at the door, then a spacious interior of mostly standard-height tables then a high bench or two. Toilets are unisex and include one marked for disability access. We ordered at our table and paid near the door on our way out.
Posted by Cindy at 8:18 am