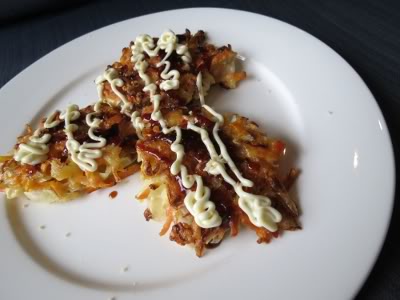 I'm surprised to discover that our blog lacks an okonomiyaki recipe. I remember attempting these Japanese cabbage pancakes several times in the past, though I've always struggled to flip them (and was perhaps reluctant to show you my cabbage hash). Recently I've downsized to okonomi-pikelets and they've been working quite well.


They're working best at getting rid of cabbage. We're really in a cabbage glut at the moment. And they're very adaptable to other fridge scraps - these ones include carrot, we've also chucked in fake bacon bits (!), and I'm confident you could chop or grate other veges (zucchini! beetroot!) into the mix. 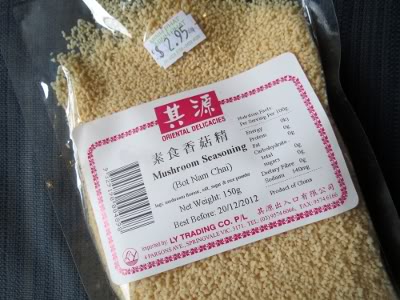 We've also been playing around with our sprinklin's. We picked up this curious packet of mushroom seasoning from Minh Phat recently and while it's pretty fun, its flavour is just a repeat on the vegetarian oyster sauce that we're firmly committed to drizzling over our okonmiyaki (along with some mayonnaise). Shredded or crumbled nori would better imitate the traditional non-veg bonito flakes, but we actually prefer shichimi tōgarashi for the bit of spice it lends.


We've had ample success subbing the eggs with powdered replacer and we've made comparable vege fritters using (less) chickpea rather than wheat flour. It may not be authentically Japanese but since okonomi means "what you want", I think we preserve the spirit of these pancakes.


Okonomiyaki
(based on this recipe at Okonomiyaki World)


In a large bowl, whisk together the flour and water/stock until smooth, then whisk in the eggs. Fold in the cabbage, carrot and ginger until they're evenly coated in the batter.


Pour enough oil into a frypan to thinly coat the base and bring it to medium-high heat. Spoon the okonomiyaki mixture into the frypan as thick pancakes. Traditionally you should make just two large ones (in two batches) with this amount of mixture, but I prefer to make a dozen or so smaller ones (~8cm diameter) so that they're easier to flip.


When the pancake(s) are nicely browned on one side, flip them over to brown on the other. The high-ish heat is good for creating a crust and ensuring these a flippable, but you may need to turn it down after the flip to ensure the pancake is cooked through.


When the batter is set and the crust is browned, serve the okonomiyaki drizzled with the toppings.
Posted by Cindy at 9:21 am