Wednesday was another half day, giving me another two free meals. I was in the mood for a trendy Melbourne-style cafe meal for breakfast. A lot of places in Toronto seem to only do brunch, meaning either they're only open pre-lunch on the weekends or they don't really get started until 11 or so. The breakfast-focussed places that are open early seem to be largely diner-style places that stuff you full of eggs and potatoes, so it wasn't as easy as I'd hoped. Still, after a bit of web research, I decided to try out Saving Grace - it was near the place I had to go afterwards for work, had excellent reviews, drew long weekend queues, and seemed to offer some original brekkie dishes. 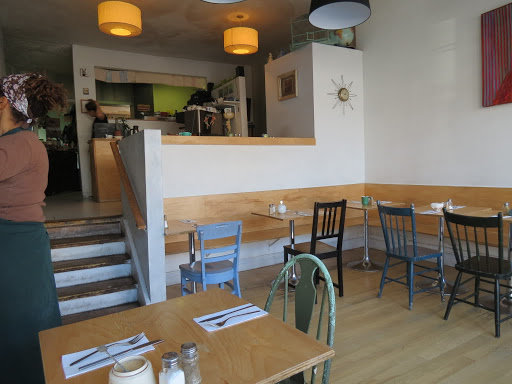 The fit-out is very familiar - Saving Grace wouldn't look out of place at all in Collingwood or Brunswick. And, like cafes in those suburbs that draw big weekend crowds, Saving Grace is easy to get a table at on a work day. I turned up about 9am and there was only one other occupied table - by 10:30 or so when I headed off things had got a bit more lively as the local hipster population started to rouse themselves.

I agonised over the menu for a while - the polenta/caramelised apple/walnuts/maple syrup combo sounded pretty wonderful, as did the rajistani eggs (scrambled with spicy red onion, chickpea masala and spicy paratha). Unable to choose between sweet and savoury, I settled on something kind of in the middle - savoury French toast (stuffed with gruyere, caramelised apples and red onions with greens, $9.75). Vegans beware - there's not much on offer for you here. 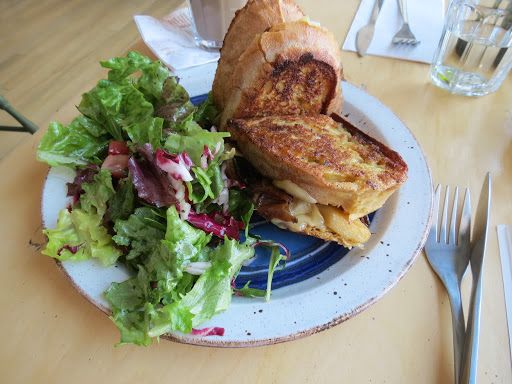 The side salad was a bit of an odd match with the French toast - something wilted would have worked better than just a straight lettuce pile. The toast however hit the spot perfectly - the apple and onion were both soft and sweetly caramelised, while the gruyere added a rich savoury layer without being overwhelmingly strong.

I was in no urgent rush to get to my work rendezvous, so I was happy to just sit, drink coffee and read. I even decided to be brave and order a latte seeing as I was somewhere that did such good food. It was a mistake. 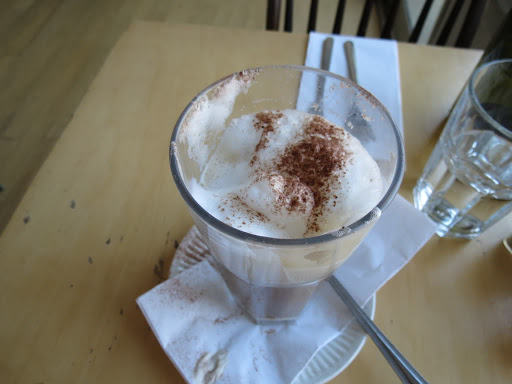 This was at least 50% foam, had chocolate sprinkles on top and tasted of nothing much except milk. Very disappointing. Luckily, the nearby Ezra's Pound does proper coffee and does it well - I grabbed a takeaway latte there and wandered off happy.

The rest of the day was work-related, including a pretty decent (and ridiculously large) felafel plate lunch at Free Times Cafe. After giving what surely must be my last PhD-related seminar at CAMH, I had a few spare hours to kill before dinner time and decided to spend them at the Art Gallery of Ontario. It's had some stunning Frank Gehry-designed renovations since we visited in 2004 and is a beautiful space to just wander through. Their Canadian collection is very, very impressive - there's almost a whole floor of the Group of Seven, plus great (temporary?) exhibitions of Jack Chambers and David Milne's work. Lots to enjoy. 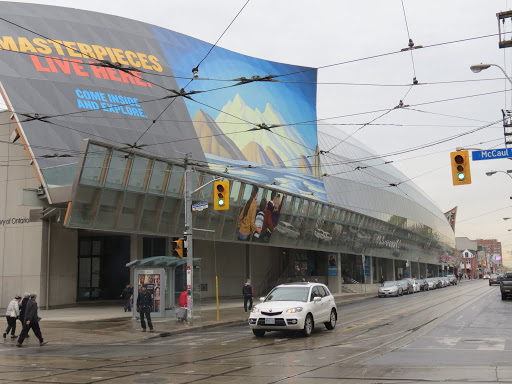 Next stop: dinner! I was in the mood for vegan junk-food, so I jumped on the Subway up to Bloor Street West to check out The Hogtown Vegan, Toronto's answer to The Gasometer. It's run by the Hot Beans people and is more restaurant than pub - they do a bit of take-away, but their main business is feeding the hordes of comfort-food hungry vegans who fill their tables. 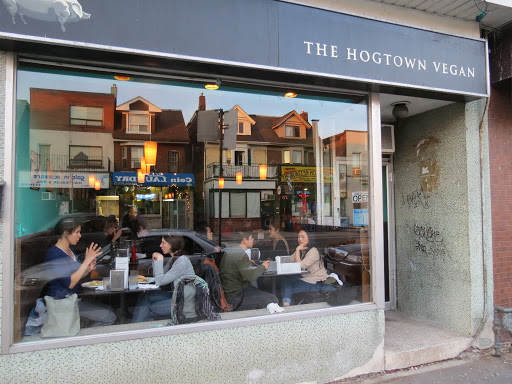 I snuck the last free table in the place and settled in with the menu. Unfortunately, I'm kind of an idiot - after scanning the six starters, three salads, three sandwich/burgers and the specials board I made my choices and ordered. It was only when I heard the next table talking about tempeh ribs that I realised the menu was double-sided! I'd missed out on 12 options, including po' boys, chicken and waffles, fish and chips, the aforementioned ribs and something called a Southern combo.Ah well, another place to revisit on some future visit.

Even with just the front-page of the menu I struggled to make decisions. The tofu-based buffalo wings sounded delicious, but I figured I really needed to sample poutine while I was in Canada. The vegan poutine (fries with Daiya cheddar and house-made mushroom gravy, $7) was a delicious mushy mess. 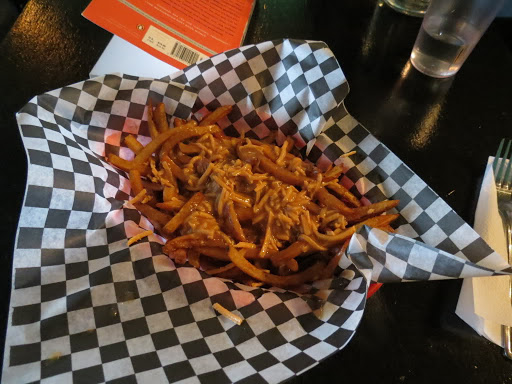 The Daiya cheese managed a reasonable simulacrum of melted cheddar and the mushroom gravy had a rich, deep flavour. The only slight disappointment was the fries - those that were cooked well were great, but quite a few of them were a bit underdone, which was a shame.

For my main meal I decided to see how their Reuben (house-made seitan, sauerkraut, mayo and sprouts on pumpernickel rye, $11) measured up. I almost doubled down and had fries on the side, but decided I should try their sauteed garlic collared greens instead. 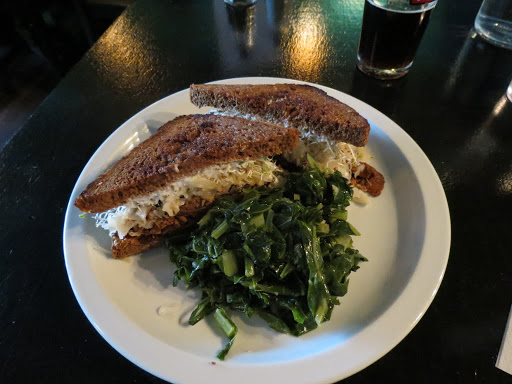 The greens were okay, but I wanted a much stronger garlic flavour. As it was they didn't taste like much at all. Luckily, the sandwich brought the flavour. The slices of seitan were seasoned up nicely, and the sauerkraut and mayo were a great condiment combo. It was a tidier version than that offered up locally, and probably even a little better - it was all about the seitan-based pastrami, which really was excellent.

So my Hogtown Vegan experience was a bit mixed. I think it's a place with a lot of potential - the menu is great (especially if you read it all!) and I can imagine heading back time and again to try everything if I was a local. As it was, I probably made some ordering mistakes (next time: Buffalo wings followed by mushroom po' boy) and left feeling a tad disappointed. Although the disappointment was tempered by the takeaway dessert I took with me!

I was too full to face up to dessert straight away, but figured I couldn't leave Toronto without at least trying something sweet. So I grabbed a fried apple pie with soy ice cream ($8.50) to wander home with. 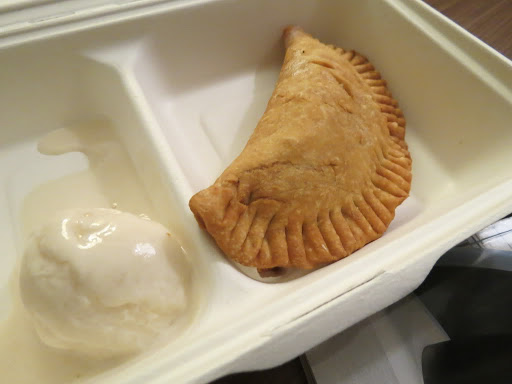 The ice-cream suffered a bit over the trip home, but the apple pie was still fantastic - wonderful vegan pastry stuffed with sweet and spicy apple mush. Not bad at all.
____________

Saving Grace is one of Toronto's best-reviewed brekkie places. Michele Wong, Mostly About Music, Plato Putas, Baby Hedgehogs, EatDrinkToronto, A Salted Life and Breakfast in Toronto all loved it, while their were dissenting opinions from Two After Twenty and Will Travel for Food.

The Hogtown Vegan has the most reviews of any place I went to in Toronto and they're all very, very positive. Check out: MeShell in Your City, Drawn and Devoured, rabbit food, This Little Vegan, dancing through life, Fully Nourished, Two Cups of Love, Ate by Ate, Amanda Factor, The Tofu Princess, Healthy Hipster, Vegan Victuals, Not Your Parents' Granola, Born Dapper, Diary of a Chef's Wife and Candy Penny.
____________

Accessibility: Saving Grace is very accessible with a flat entryway and a pretty spacious interior. Hogtown Vegan has a small step as you come up to the doorway but is also reasonably spread out inside. Ordering and payment is at the table in both places. I didn't visit the toilets in either.
Posted by Michael at 10:02 am