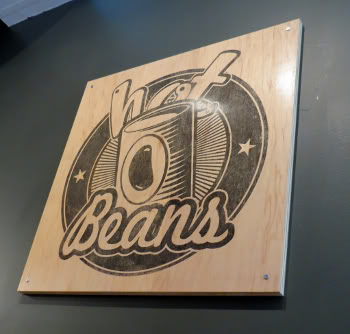 There's no post for Toronto Day 3 - it was my one completely full work day, and I didn't bother taking pictures of the catering for the blog. But Tuesday was only a half day of meetings meaning I could sneak off for lunch and a dinner. Toronto has a lot of vegetarian restaurants. A lot. So I was taking every chance I could to check them out. High on my priority list was Hot Beans, an all vegan, Mexican-themed place in the midst of Kensington Market. 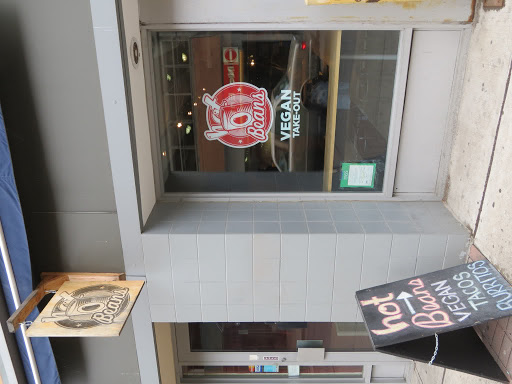 It's basically a take-out joint - there's just the small counter you can see in the photo above for people like me who want to sit and eat. The menu is pretty exciting: there's TVP and seitan burritos, jackfruit pulled pork tacos and more. I was tempted into the fairly straightforward black bean burritos ($8.50), mostly because they included shredded smoky coconut along with the spicy bean mix. 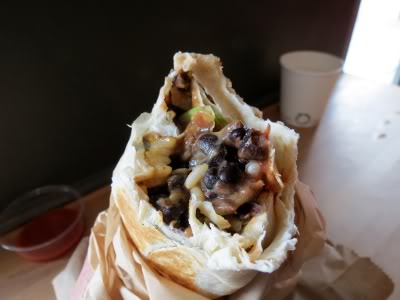 This was a pretty excellent burrito - the bean mix had an intriguing combo of sweetness, smokiness and spice. The coconut didn't shine through texturally, but it clearly kicked in a the smoky flavour, while the vegan cheese and guacamole provided a bit of contrast to the bean and rice mix. Not bad at all. Someone else ordered the jackfruit tacos while I was there and I had a bit of order envy - hopefully Hot Beans is still around whenever I next make it to Toronto!

After an afternoon wandering around a few of Toronto's west-side neighbourhoods, I hit up vegan chain Fresh for dinner. The branch on Bloor that I wound up at was heaving with people at about 8pm. In some ways the vibe was reminiscent of The Vegie Bar in Melbourne - it seems like the kind of place non-vegos head to for dinner when they're feeling adventurous. The menu is large and broken down into four broad categories: snacks, burgers, wraps and bowls. At K's insistence I sampled the quinoa onion rings (made from scratch and coated with breadcrumbs and puffed quinoa, $5.50). 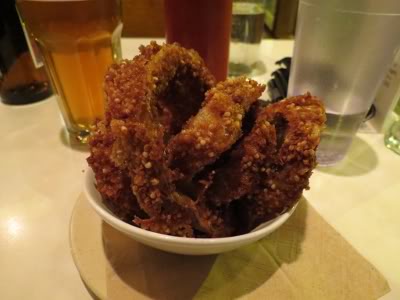 These were just about the crunchiest onion rings I've ever eaten - the puffed quinoa really made a difference. They were perfectly cooked and very, very moreish. Recommended!

After two days of eating far too many morning tea pastries I was feeling like a healthy main meal and Fresh had plenty of options. In the end I settled on the powerhouse bowl (avocado, chickpeas and grilled tofu with sunflower sprouts, toasted nut & seed mix, tomato, red onion & spicy tahini sauce served on brown rice, $14). 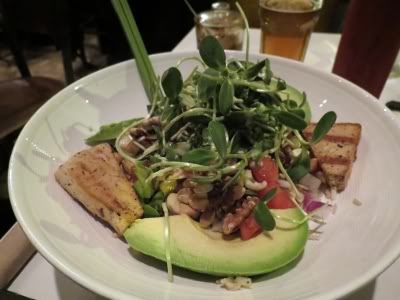 It may have been made up of healthy components, but it was way too much food - I ended up leaving some in the bowl (although to be fair, that was probably because I'd just scarfed a serve of onion rings). The tofu had a nice savoury marinade (based on soy sauce I think, but with a few other flavours in there as well), while the greens, chickpeas, nuts and seeds were a nice mix of textures. The spicy tahini didn't have quite the punch I was hoping for, but this was still a pretty satisfying bowl of goodness - a bit on the bland side maybe, but healthy and (as you'd hope) fresh.Once you add in the taxes and the tip, Fresh isn't particularly cheap - my meal cost around $30 all up. Still, there's so much to try at Fresh that I'd love to come back for. One day. Fresh had a handful of vegan desserts to choose from but I'd eaten myself into the ground and staggered off towards the hotel to sleep it off.
____________

Like the Vegie Bar, Fresh divides opinions - in a nutshell, Where the Veggies Are, Food Junkie Chronicles, Healthy Veg and baystreat loved it, while In Kensington They Annexed My Heart, another amateur food blog, Where Jess Ate, Food With Legs and Air Eater (who report that you can't really trust Fresh's GF dishes to be GF) were all much less impressed.
____________

Accessibility: Hot Beans is pretty inaccessible - the counter you order at is down a flight of half a dozen steps and the venue as a whole is a bit small and cramped. Fresh is much bigger and doesn't have the steps, but the tables are pretty jam-packed and things get quite crowded. Ordering and payment is at the table.
Posted by Michael at 10:34 am