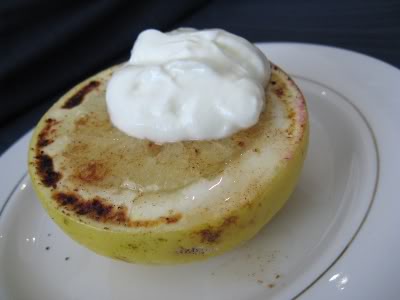 After roughly a year's break we're trying an organic fruit'n'veg box delivery again, this time from Aussie Farmers Direct. Our first one arrived on Thursday and included a grapefruit. Grapefruits weird me out. I'd never eaten them growing up - I just saw them mentioned again and again on the diet pages of the women's magazines my grandma and aunties read. This had me assuming they weren't tasty. Since then I've enjoyed a few grapefruity beverages and desserts while eating out but not ventured to do much with them myself.
Ottolenghi has a grapefruit breakfast recipe online, which I figured must be a good bet. It's pretty simple - halve a grapefruit, sprinkle over sugar and star anise, grill it to a syrup and serve with a little yoghurt. It was... just barely OK. Messy to eat. I didn't really get into the flavour combination. I'm pretty sure it's not the thing to sustain me through a weekday either.
Does anyone out there have a favourite thing to do with grapefruit? There's every chance we'll be delivered a few more.
Posted by Cindy at 11:00 am