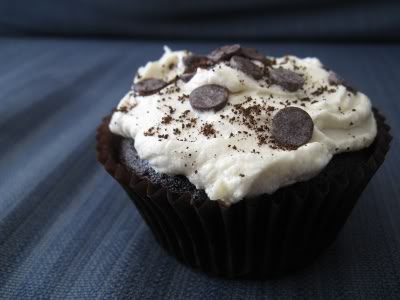 After dinner at Purple Peanuts, I'd kinda been hoping to visit Cupcake Central for dessert. Alas, they were closed by the time we were ready to stop by. Even after arriving home I couldn't get cupcakes out of my head and so flicked through my copy of Vegan Cupcakes Take Over the World. Turns out I had the pantry supplies to make plenty of these recipes! I decided to try out something similar to the suggested mocha variation on their basic chocolate cake recipe - Michael's a coffee lover, and even had the cold dregs of his habit sitting in the coffee plunger for me to use.
Halving the batter quantity and quartering the buttercream, I turned out 5 cupcakes and a little too much icing. There just wasn't as much coffee flavour going on as I'd hoped so after the cakes were cooked, I poked holes in them with a skewer and poured in a few extra teaspoons of cool espresso. Michael's coffee grounds were quite fine so I sprinkled some over the top as a garnish too. There still wasn't quite the bitter edge I was after but I've learned something for next time - I won't be shy about dumping a couple tablespoons of the ground stuff directly into the batter, as they're unlikely to be gritty.
Something I've been slower to learn is that these icings are just too sugary for me. Reducing the whole quantity is not enough; I've got to cut down the proportion of sugar within the recipe. The cakes, though, are terrific - so fluffy and moist. And I felt pretty clever whipping these up on a weeknight whim.

Preheat the oven to 180°C. Line a cupcake tray with 5-6 paper liners.
In a small bowl mix together the soy milk and apple cider vinegar, allowing them a couple of minutes to sit and curdle. Stir in the cold coffee, sugar, oil and vanilla under well mixed.
In a separate small bowl, sift together the flour, cocoa, baking soda and powder, and salt. Gradually beat them into the liquid mixture, getting rid of as many lumps as you can. Pour the batter into the cupcake liners, filling them three-quarters full.
Bake the cupcakes until they pass the skewer test, about 18-20 minutes. When they're ready, keep poking multiple holes in the top of each cupcake and spoon over a couple tablespoons of cold espresso. Allow the cakes to cool completely.
In a small bowl, beat together the margarine, vanilla and 1 tablespoon of the cold coffee. Gradually beat in the icing sugar, adding more coffee if it becomes too thick. Spread the icing thickly on the cupcakes, then sprinkle them with chocolate chips and ground coffee.
Posted by Cindy at 10:10 am