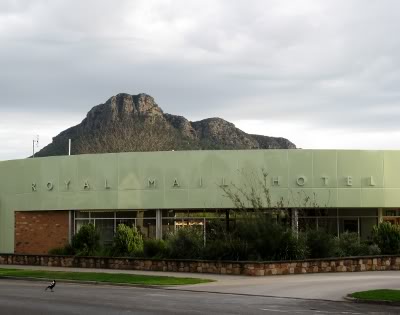 We've been trying for months to coordinate a trip to Dunkeld with Mike and Jo to try out the Royal Mail's degustation, but had been constantly foiled by the hotel's massive Saturday backlog and our difficulties in finding a Friday night we could all spare. Finally after rescheduling three or four times we were in the car (eating Cindy's apple pies!) and on our way to Dunkeld. We arrived in the dark, missing the classic view of the art deco building with Mt Sturgeon in the background (the photo above was taken the next morning, before a top notch continental brekkie). Still, we weren't there for the views - it was all about the food.
The Royal Mail has a vegetarian degustation as a standard option, which always gives me a good vibe about a place. And it's a big one: 10 courses, including 3 desserts for $130 or a slightly terrifying $245 if you're reckless enough to match wines (I was, while Cindy was less impulsive). I won't pretend to be a wine expert, so I'm not going to comment on each drink - on the whole, they were stunning, with only the innovative use of sake for one course disappointing any of us.

The bread came with a smoked butter, which divided opinion - I loved it, but not everyone at our table was convinced that butter needed the tweaking. The bread, as always at fancy places, was outstanding. Things got started properly with a white bean and parmesan sandwich. This was one of the best dishes of the night - rich, crispy little parmesan toast slices with a gorgeous bean  filling. It's surprising how few of the fancy degustations we've gone too have made much use of beans as protein - they should, because this was amazing. 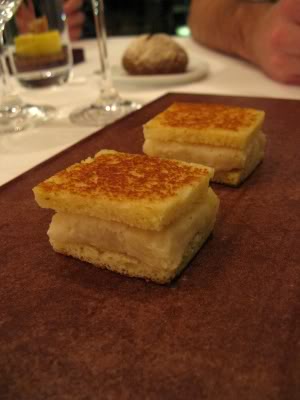 Next up was a course I was kind of dreading: tomato on toast with handmade sheep's ricotta. 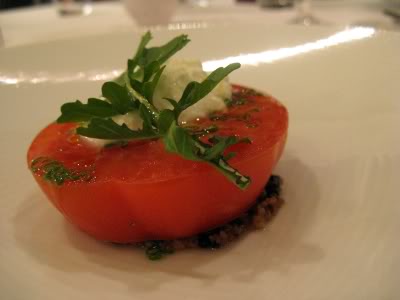 My issues with tomato are no secret, but this won me over - it was warm, tender and tasted amazing. The 'toast' was a grainy mix that added a bit of crunch to the softness of everything else. Kudos to The Royal Mail: I'm still surprised that they managed to make something so tomato heavy that I really enjoyed.

The tomato was followed by a vegetable broth, filled with pickled vegetables and kohlrabi. 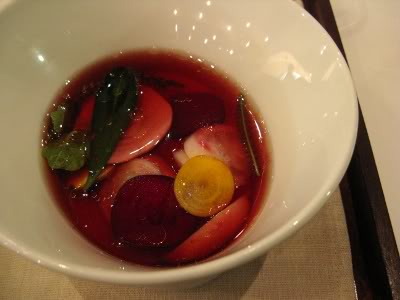 This was a fairly simple dish - crispy pickled vegetables in a mild, slightly sweet, broth. There was a weird starchy kind of jelly layered across the bottom - we couldn't figure out what it was, but it added something a bit intriguing to an otherwise straightforward veggie broth.

Next up was this cute little dish: egg yolk, rye, legumes and yeast. 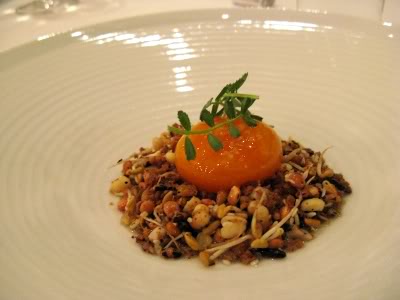 The egg yolk was a perfect little globe of awesome on top of a crunchy mix of rye and legumes. The yeast underneath may well have been nooch, made into an interesting kind of paste with a creamy, salty flavour.

We were deep into the savouries by now, and I was excited to be getting some protein with tofu, potato, mustard and nashi. 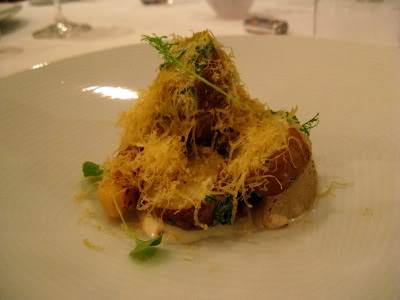 I was slightly disappointed to find out that the tofu had been frozen and then grated over the potato and nashi pile - sure it's a clever and innovative trick, but I was really looking forward to something with tofu as the centrepiece. Still, the combination of the crispy sweet pear and the creamy potatoes with a creamy sauce and some seedy and slightly hot mustard. The tofu didn't really add a lot unfortunately.

Another starchy dish was next on the menu: jerusalem artichoke, triple cream and chive. 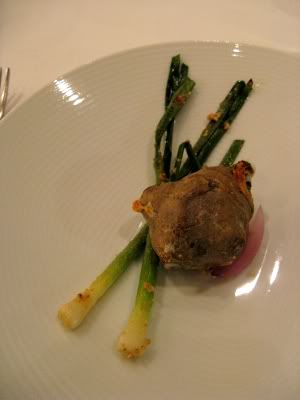 This was a weird mix of textures - the exterior was a bit woody and tough, while the inside was a velvety soft creamy puree. I'm not quite sure how it was done, but it was a very impressive trick. To be honest, the skin was a bit annoying to eat, but the mush inside was fantastic. The shallots were tender and tasty, although I think it was a bit onion-y for Cindy. 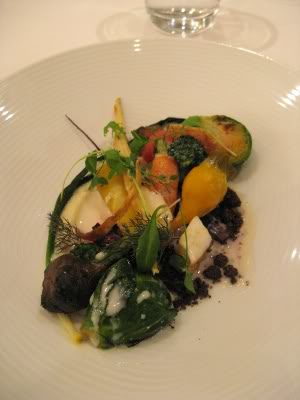 This was a fairly simple mix of beautifully cooked, locally grown vegetables - some cute carrots, a brussel sprout , a beetroot and a few other bits and pieces served up on some sort of strange faux-soil, that had a burnt-toast and coffee flavour to it (it reminded me a little of the brioche-based 'soil' we ate at Interlude some years ago). I liked the straightforwardness of this dish, which really let the quality of the vegetables shine through.

Our final savoury dish for the night was eggplant in white miso with dried grains and cured kelp. 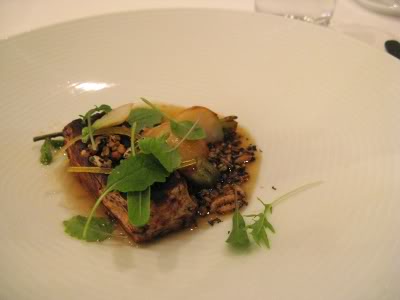 This was a delicious chunk of eggplant, tender without being textureless, coated in some sort of miso marinade and soaked in a broth that was probably miso-derived as well. The grains were quite similar to the stuff that came with the egg yolk earlier. Neither of us have any real memory of the kelp - I can blame the booze at this point, but I'm not sure how Cindy can explain it. 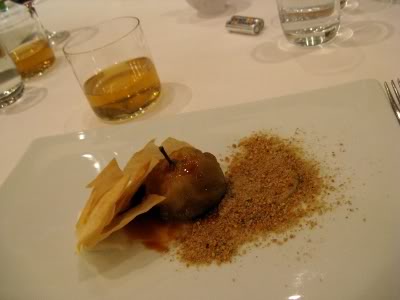 This was an apple cooked in its skin to be soft and smushy, smeared with a stick caramel sauce and served with a powder of almond. This dish was paired with a light chamomile tea (a break from the booze!) which cut through the sweetness of the apple.

What followed was the most impressive dish of the night: beetroot and mandarin, cocoa and walnut. 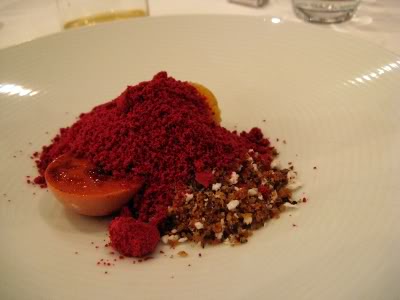 The flavours and textures of this dish were just stunning - the beetroot turned out to be a powdery beetroot-based icecream, which was a mind-blowing concoction. There was the light chocolaty crunch of the cocoa and walnut, the sweet mandarin crème brûlée and the citrussy freshness of real mandarin. Possibly the best dessert I've ever tasted. 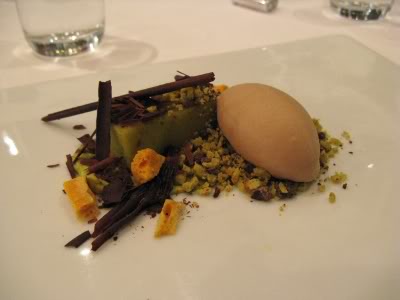 There was a dense pistachio meal cake, delicately sprinkled with fantastic dark chocolate, some chunks of honeycomb and a little egg of smooth and creamy choc-hazelnut ice-cream. Every good degustation should end with a chocolatey dessert.

Speaking of chocolates, we finished up with these cute little truffles with a surprisingly strong Earl Gray flavour to them. 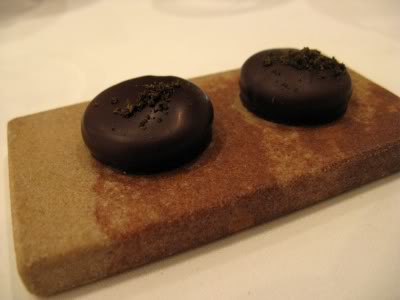 The Royal Mail puts on a very impressive spread - there were a few savoury courses that didn't wow all of us, but by the time we'd worked our way through the desserts I was ready to call this the best meal of the year. The space is not as charming as I'd expected - on the upside it's spacious enough that you're not forced to listen to other people's conversations all night, but on the downside the atmosphere was a little flat. The service was impeccable though maybe a little on the formal side for us - it's nice to feel that you're at a fancy place, but the service style of the high-end restaurants sometimes makes me feel a bit awkward. Still, we had an amazing night and staggered across to our very comfy rooms, loaded up with some very fine food and wine.
____________


Accessibility: The Royal Mail seems super accessible, right down to the large flat showers in the rooms.
Posted by Michael at 11:39 am