Cindy and I have heard plenty about Quorn over the years - it's a strange fungus-derived faux-meat product that is popular in the UK but has only recently hit the market here in Australia. Quorn is a bit controversial; it's non-vegan (egg-whites are an ingredient) and even contained battery eggs until the last few years. Now they're using free-range eggs and they've clearly jumped through whatever hoops are necessary to be imported into Australia. When it turned up in our local Woolies, we thought we'd give it a try. 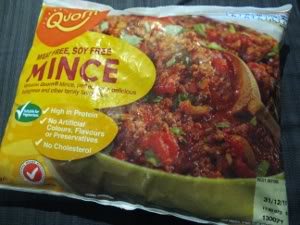 Our choice was the mince option. And our recipe of choice?  Cindy's amazing faux-meat pies. It slots into the recipe basically as a direct replacement for the TVP. The pies turned out okay - the mince texture was even more convincingly faux-meaty, and Quorn seems to have a bit more flavour than TVP (although it's hard to tell when we smother it in pie gravy). The downside: the pies aren't vegan-friendly in this form. It seems strange that this company hasn't found a way to veganise their products - my completely uneducated guess would be that the market for faux-meat products would be substantially vegan. With that in mind, it'll be interesting to see whether Quorn catches on here. 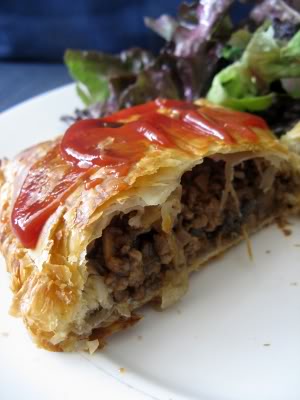 Labels: Pies and other Pastries