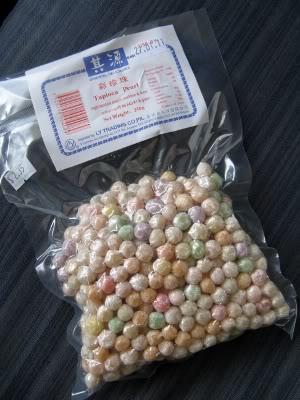 Working from home and hungry for something novel, I recently ripped open the packet of tapioca pearls that we bought from Minh Phat.  I was attracted to their Froot Loopy colours, and they reminded me of the multi-coloured noodley dessert, bubur cha cha, that we made during our Malaysian cooking class.  Lucky for me, I also had a can of coconut milk and a can of mango slices on hand for pudding power. 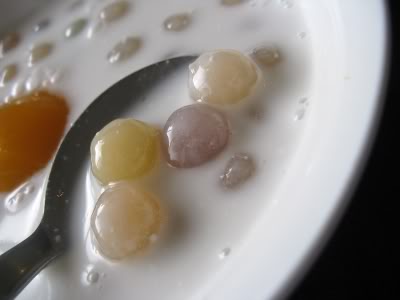 From there, I used this recipe from About.com as a loose guide, boiling and simmering the pearls and allowing them to cool.  Then I deviated a little, sweetening the coconut milk with the canned mangos' syrup and plonking in some of the mango flesh for good measure.
This was fun to make and pretty fun to eat, too, though I didn't love it with the same fervour as that bubur cha cha.  I wonder if it's because I used the over-sized pearls; the tapioca's all texture and (almost) no flavour and might be more enjoyable in smaller droplets amongst the sweet syrup.
Are there any tapioca pearl aficionados out there?  I'd love to know how you cook and eat them at home.
Posted by Cindy at 2:37 pm