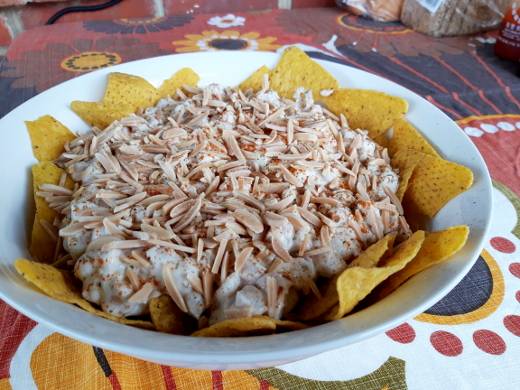 'That chickpea thing' has evolved over the years. Its origins are a dish that the Moroccan Soup Bar has been serving forever. It's a rich, hearty bake; thick with yoghurt, tart with lemon juice and tahini, crunchy with fried flatbread and a topping of toasted almonds.

Soon enough, I tried replicating it at home. A few years later, I hit on corn chips as a convenient, gluten-free replacement for the flatbread. This summer, I took it one step further and made a vegan version. Replacing such a large quantity of yoghurt was always going to be challenging, but I pulled it off with the help of some twitter friends. Impressed brand almond milk-based natural yoghurt was a great way to subtly reinforce the almond topping, without introducing the sweet, fatty intensity of coconut-based yoghurt.

This chickpea thing's a long way from that chickpea thing. But it's still a good thing, handy for making in other people's kitchens and sharing at barbecues in summer.

Rinse and drain the chickpeas, and set them aside.

Gently toast the almonds using your preferred method. We pop them in the oven for 5 minutes if there's something else on the go, but a grill or dry frypan can also work. Set the almonds aside to cool.

In a medium-large bowl, whisk together the tahini and lemon juice. If you're using fresh garlic, crush it into a little saucepan with a glug of olive oil and fry it until golden. Add the fried or powdered garlic to the tahini-lemon mixture. Stir in the yoghurt until everything is well mixed. Season with salt and pepper, to taste. Fold in the chickpeas.

To serve, arrange the corn chips over the base of a large salad bowl or platter. Spoon over the chickpea-yoghurt mixture. Swish over some optional olive oil, sprinkle with a little cayenne pepper, then scatter the almonds generously over the top.
Posted by Cindy at 7:37 am