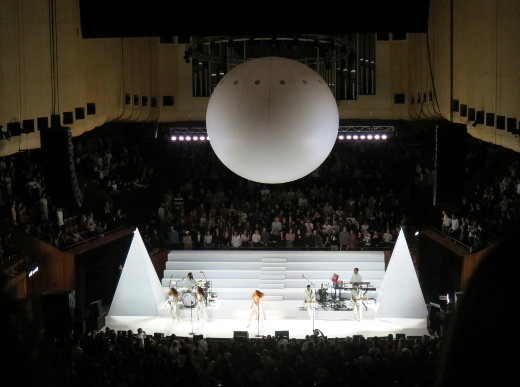 My Sydney weekend wasn't all old faves; we planned some new activities and foods! The centrepiece was a night inside the Sydney Opera House's Concert Hall, featuring the phenomenal Solange. Her performance will go down as one of my all-time favourite live events (and I've tucked one more photo of her at the end of this post).
____________ 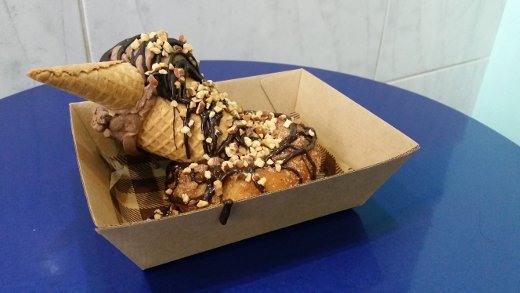 A day earlier, travelling into Sydney by train, my weekend companion made the outrageous suggestion that we lunch at the all-vegan Gelato Blue. We did, and we loved it! I ordered a hot-and-cold doughnut sundae ($13): a warmed-up cinnamon-sugar doughnut and a large scoop of gelato joined together with wonderfully weird waffle cone limbs, all drizzled in Ice Magic-style chocolate sauce and crushed nuts. The chocolate hazelnut scoop I chose was lightly salted and very, very good - though the embellishments were delightful, methinks this gelato doesn't actually need dressing up.
____________ 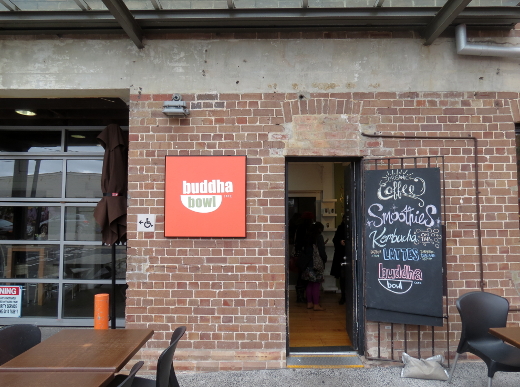 The Buddha Bowl Cafe was a nice low-key spot for Saturday brunch. It's vegan by default with a few vegetarian options (halloumi, eggs, dairy milk) available as add-ons. This place has a wholefood vibe, with all the hits (avocado, hummus, a rainbow of fresh produce) and misses (kombucha on tap, blue algae lattes, raw-only cakes) that entails. My plate was the biggest hit at the table: sourdough French toast made with coconut cream ($12), served with maple syrup, date caramel, dried coconut, coconut yoghurt and lots of fresh banana. 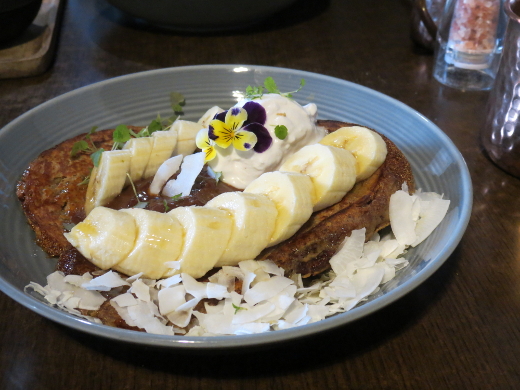 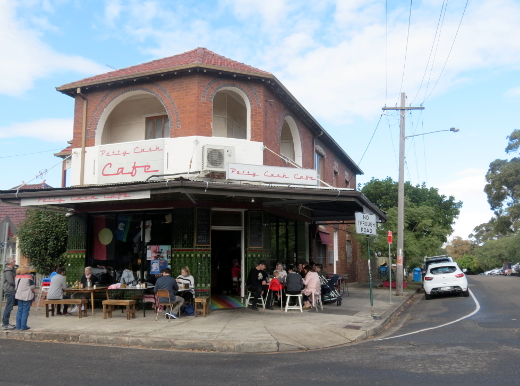 A day later, Another Outspoken Female and her Significant Eater whisked me off to the very popular Petty Cash Cafe. I loved its homely, cluttered atmosphere; mismatched crockery, tea cosies and crocheted knee blankets for those of us sitting outside. Though Petty Cash does serve meat, it's made some special efforts for its veg*n customers, such as scrambled tofu, vake (fake bacon), and fluffy chia-based vegan pancakes. While I was initially drawn to the Vegan Big Brekkie, I ended up doubling down on French toast ($17.90), receiving excellent golden slices of sourdough with just enough maple syrup and plenty of crispy-then-chewy vake.
My one disappointment was that the seasonal fresh fruit I saw listed amounted to a single strawberry garnish (most likely my fault for misreading the menu), but AOF generously shared the bananas and raspberry sauce that accompanied her pancakes. 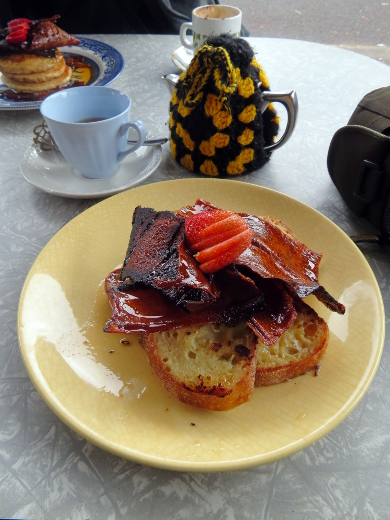 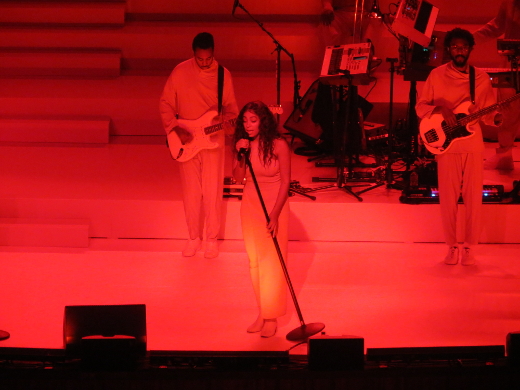 These were all beaut meals, though it's the time I spent with people - a couple of Melbourne mates, a handful of Sydney-siders and, from an admiring distance, Solange Knowles - that I'll remember best from this weekend away. Nevertheless, the story of That Time We Lunched At Gelato Blue might last a couple of rounds... !
Posted by Cindy at 2:18 pm