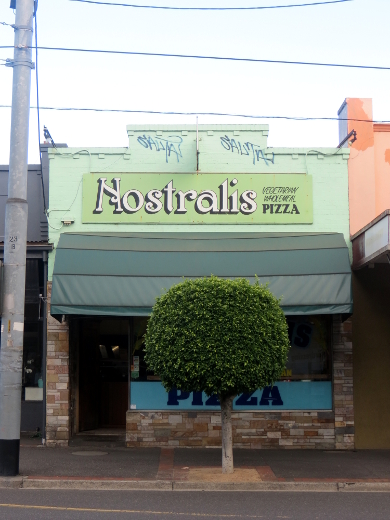 I’ve been vaguely meaning to visit Nostralis since reading about it in the Melbourne Veg Food Guide way back in 2008. It’s a long-running vegetarian pizza place in Caulfield that’s been in operation since 1981, surely a competitor for Melbourne’s second-longest running vego place after Shakahari. The décor betrays its age – lots of wood panels and old fashioned signage, but the vibe is welcoming and relaxed. 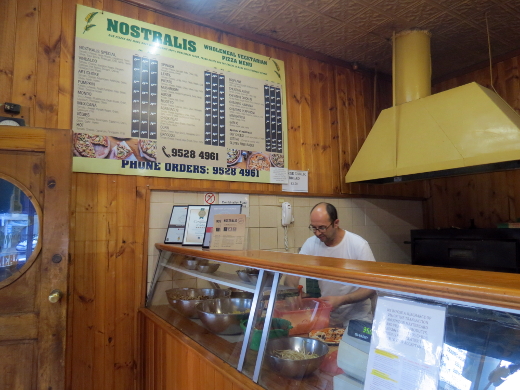 The menu has some odd options – a vindaloo pizza that includes banana and sultanas sounded very disturbing to me – but it also recreates some classics. There’s a margherita, mushroom and Mexicana pizzas and a whole range of other veg-heavy toppings. They’ve also added in a few mock meat pizzas for vegos who miss their pepperoni. Gluten free bases and vegan cheese (Cheezly) are available with small surcharges.

Cindy’s a sucker for ham and pineapple, so she went for a small Hawaiian pizza with dairy cheese ($11.50). I didn’t taste it, because pineapple on pizza is an abomination, but she was impressed. There was heaps of mozzarella and generous mock ham, but she would have added even more pineapple given the choice (because she's a monster). A step up from Eat Pizza's version. 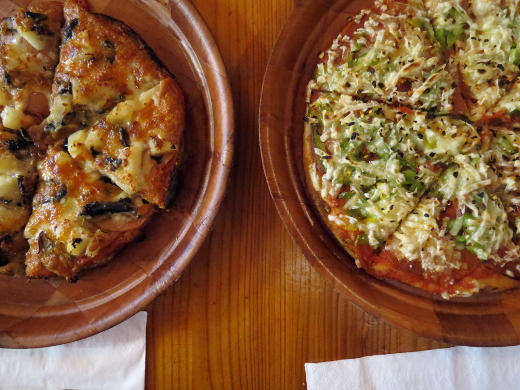 I had a medium sized pepperoni with vegan cheese ($15 + $2.50), intending to take some leftovers home for lunch the next day. Instead, I smashed my way through the whole thing. These aren’t the authentic Italian pizzas served up at Gigi or Kaprica, but Nostralis really have the nostalgic '80s Pizza Hut vibe down. If we lived nearby I’d be going back a lot.


Nostralis is a steady success story in Melbourne’s veg dining scene, surviving with seemingly few changes for nearly 40 years. On a sunny Wednesday night we watched a steady stream of people grabbing takeaway or plonking down to share some pizzas – everyone seems to share an enthusiasm for this old school eatery.
____________


There are a couple of Nostralis posts on vegan blogs Veganise This! and In the Mood for Noodles (twice), but nothing for ages that I could find.
____________

Accessibility: There's a small step on entry into a fairly crowded interior. We ordered and paid at a high counter and didn't visit the toilets.
Posted by Michael at 8:21 am