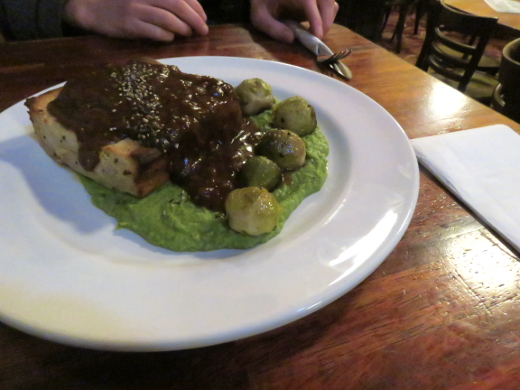 Our first trip to The Yarra Hotel was such a great success that we've already been back twice more: firstly to catch a friend's band on a Sunday evening, and then for a bookclub meeting in the beer garden on a Tuesday night (catching the half price vego food offer once again). It's a lovely pub - buzzy without being super busy, with a beautiful big beer garden filled with dogs, people and an open fire. The fire can get a bit smoky sometimes, but it's a small price to pay for the warmth and atmosphere it brings. 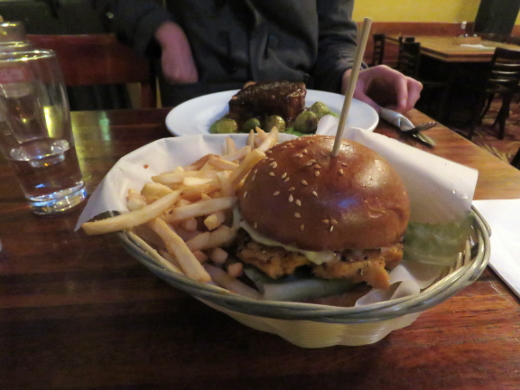 On the Sunday night we had a couple of non-vegan mains - the vego toad in the hole ($22) for me and a vego version of the kangaroo burger ($18) for Cindy. The vegetarian options on the burgers involve a simple substitution of a pumpkin and chickpea patty for the meat involved, so Cindy got to keep all the trimmings of the roo burger - fig jam, cos lettuce and gorgonzola mayo. They worked well alongside the fairly basic patty and delicious chips - $18 is a bit steep for a decent veggie burger, but that's why Monday and Tuesday night are the best time to visit. The toad in the hole (top photo) was wonderful - a thick loaf of Yorkshire pudding stuffed with two good vego sausages and slathered in gravy, with Brussels sprouts and pea mash for some greenery. I don't think they can do the Yorkshire pudding vegan, which is a shame because this is a magnificent pub meal.


Our second visit was with our bookclub mates, which meant Cindy got into a vegan shared plate situation, sampling four of the sides and snacks (all half price on a Tuesday night). Clockwise from top-left she had: vegan pickled pea and potato pasties ($6), buffalo veg nuggets ($6), vegan mushroom pate with crispbread ($6) and mixed greens ($4). The nuggets were probably the highlight - chewy little bites with a nice spicy marinade, but the pasties and the pate had fans as well. The greens were pretty basic, but worth the $4 to provide something resembling vegetables to the vegan spread. 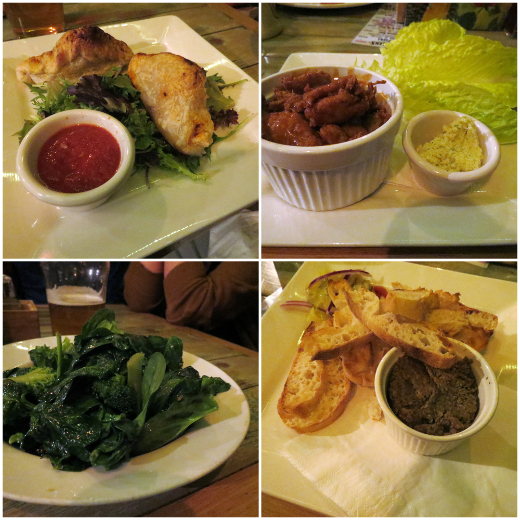 The Yarra is an excellent addition to Melbourne's veg-friendly pubs, with a decent range of food that's especially worthwhile on Mondays and Tuesdays, when you can eat your fill for a tenner. The beer garden is great, they put on lots of great bands and the staff are friendly - we'll be back again and again.
____________


Accessibility: There's a small step on entry and another down to the beer garden. Tables are quite generously spaced. We ordered and paid at a high bar.
Posted by Michael at 6:55 pm