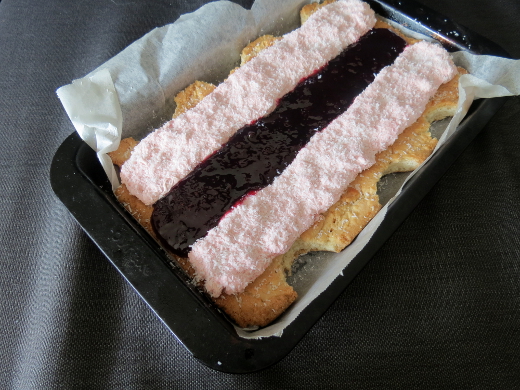 Our favourite Vegan About Town is headed to Singapore for several months, and as a send-off she requested Aussie foods for a potluck in her home. Michael made sausage rolls, naturally, and I put my mind to dessert. I took a gamble on recreating Iced Vovos which Steph has related some nostalgia for.

Vegan-wise, the internet turns up a couple of neat recipes on Like A Vegan. By the time I came on board, one of Steph's housemates had already tried this formulation, and they weren't a fan of the agar texture in the pink fondant layer. I gave myself a couple of options - shopping around for vegan marshmallows, and/or making my own pink marshmallow fluff using aquafaba. 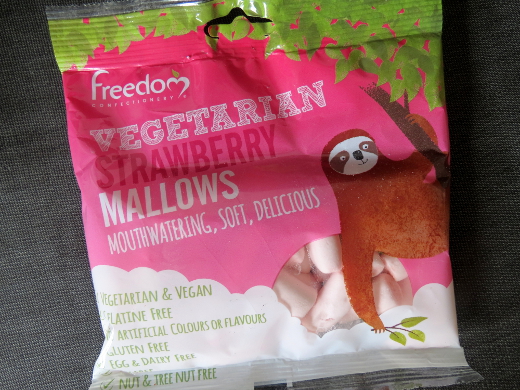 From the Cruelty-Free Shop, I was able to pick up these strawberry vegan marshmallows. They're lightly pink and have a pleasant, natural strawberry flavour that I hoped would carry through. (I still held over some aquafaba from Saturday night's dinner just in case it all went horribly, horribly wrong.)

Everything was a bit experimental, really. I made an oversized biscuit that ended up a bit cakey after I topped up my plain flour with self-raising. The dough was too sticky to shape, but I cautiously cut some Vovo crinkles into the edges after it baked.

I started getting properly nervous when I tried to melt the marshmallows - they stretched and globbed and stayed stubbornly lumpy, while the edges began turning gold. Using oiled baking paper, I was able to fashion the goo into a couple of sausage shapes and lay them onto my big biscuit. (The marshmallow saucepan looked disastrous, and I filled it up with cold water that I prayed would dissolve the sugar.) I reckoned those marshmallow logs were hiding lumpy-crunchy-sugary bits on the inside. The coconut and jam were my saviours, the final well-behaved touches that lent the perfect Vovo look.

For no reason I can fathom, the marshmallows proved to be just fine and my mega-mallow Vovo was a roaring, sugary success. I still hesitate to recommend my sticky-gooey-will-it-or-won't-it approach, though! Embark on this recipe at your own risk.


Preheat an oven to 180°C. Line a small walled baking tray with paper.

Place the margarine, sugar and vanilla into a large bowl and beat them together until fluffy. Sift in the flours and salt and slowly beat them in, gradually adding the soy milk as you go. It could all come together into a sticky dough. Press the dough into the baking tray and flatten it out as best you can. Bake it for 10 minutes, then retrieve the biscuit to flatten it out more with the back of a spoon. Bake the biscuit for a further 10-15 minutes, until it's golden and cooked through but not too thickly crusted. Allow the biscuit to cool completely.

If you'd like to replicate the crinkled edge of a Vovo biscuit, use the baking paper to lift the biscuit out of the tray. Use a round biscuit cutter to remove small arcs of biscuit at regular intervals along the edge (see top photo).

Gently spoon the jam onto the middle third of the biscuit. Store it all in the fridge if you're not planning to serve it right away; it can sit at room temperature for a couple of hours if needed.
Posted by Cindy at 7:42 am