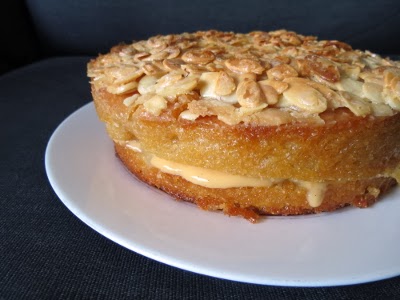 We recently colluded with our friend Clamps to hold an evening of Krautrock and (vegan) Frankfurts. I can't let any event pass without dessert, and took this as an opportunity to make a German-style cake. Bienenstich, or bee sting cake, is a childhood favourite of mine. Though most of my forebears migrated from Germany, I've no particular memories of my mum, aunties or grandmothers baking a family recipe. We usually bought it from a local bakery and called it by its German name whether they labelled it so or not.


Bienenstich is traditionally a yeasted, not-so-sweet cake sliced into two layers, filled with a thick custard and topped with a golden brown crunchy almond toffee. Strangely the recipe I hand-copied from my mum more than a decade ago doesn't include yeast. Neither does the bee sting cake in Leigh Drew's Vegan Indulgence. The latter recipe skips the eggs and introduces orange juice to the custard, but otherwise the ingredient lists corresponded well so I decided to go with Drew's all-vegan version.


I really like that Drew incorporated almond meal into her cake batter - though I don't think it's traditional, it brings a certain sturdiness to the crumb and confirms almonds as the feature of the cake. The orange custard isn't much like the whipped-cream fillings I encountered as a kid but it succeeds by echoing the orange-and-almond meal pairing popular in gluten free baking. It takes a strong custard to hold up a cake layer and mine didn't quite cut it - I used about a third of my custard as filling, saw that any more would surely spill out onto the plate, and served the remainder on the side.


For all that custard and almond meal, this cake would be nothing without its almond toffee topping. It's spread over the cake during the last 10 minutes of baking, allowing time for the almonds to brown and the toffee to set hard. The toffee syrup also snuck down the sides of the cake, creating a gorgeous, sticky caramelised crust. The almond toffee was the true trigger for my sweet-toothed nostalgia, and this recipe's crackly topping was the stuff of Sunday morning teas with my extended family.


Preheat an oven to 180°C.  Line a springform cake tin with paper.


In a large bowl, sift together the flour, baking powder and sugar. Stir in the almond meal.


In a second smaller bowl, whisk together the maple syrup, vanilla, vegetable oil and vinegar.


Pour the soy milk into the large bowl of dry ingredients and stir them together. Add the oil mixture and combine thoroughly, but don't mix more than you have to. Pour the cake batter into the lined cake tin and bake for 30 minutes.


At the 20 minute mark during baking, prepare the toffee. In a medium saucepan, melt together the margarine and sugar. Allow them to simmer for about 2 minutes, then stir in the soy milk. When the mixture is smooth, take it off the heat and stir in the almonds and salt.


When the cake hits 30 minutes in the oven, retrieve it and spread the top with two-thirds to three-quarters of the almond toffee - whatever it takes to get an even layer of almonds across the top. Return the cake to the oven for a further 10 minutes, until the almonds are golden brown and a skewer through the cake comes out clean.


Allow the cake to cool in the tin for 15 minutes, and then completely on a bench or cake rack.

When the cake and custard are cool and ready, carefully slice the cake horizontally. Spread the remaining almond toffee on the bottom half of the cake. Top it with the cold custard. You really need it to be a sturdy custard that can take the weight of the top cake - if in doubt, reserve some of the custard and serve it on the side of the cake. Gently place the top half of the cake over the custard-spread base. Chill the cake thoroughly before serving.
Posted by Cindy at 7:37 am