Update January 10, 2013: Our preparations for another trip to MOFO have been hit by the sad news from Hobart that Warung Indonesia has closed. What a shame. 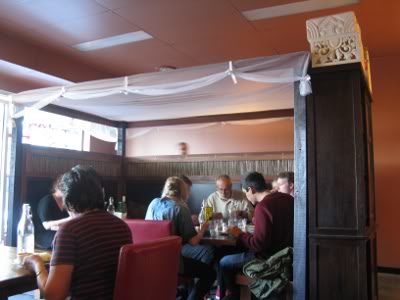 As regular readers will know, Cindy had an incredibly busy start to the work year, meaning that mid-Jan was our first real chance for a holiday. Luckily, this coincided perfectly with the MONA FOMA festival in Hobart, so we loaded up with PJ Harvey and Dresden Dolls tickets and flew on down for a long weekend. Thus, this week is going to be filled with Tassie-themed posts - in four days we managed to eat very well indeed.

Our first night saw us arriving later than we planned (thanks Jetstar) and with no real plans for dinner. Thankfully Liz tweeted us a link to a very handy Hobart food forum, which led us straight to Warung Indonesia. Warung Indonesia is going for a hawker-style vibe in a restaurant space - right down to the built-in food cart. 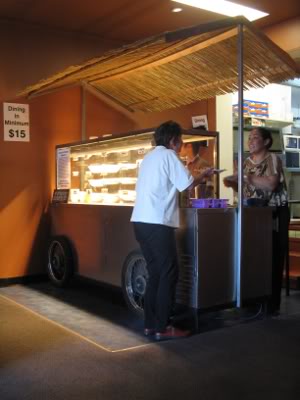 Dishes are $4 each (plus $3 for rice) - we ended up ordering everything vegetarian on the menu, seven dishes in total. The waitstaff were super-helpful - checking in with us about the secret anchovies in the eggplant and generally making sure we were sorted out. First up were the two deep-fried dishes: stuffed tofu and bala bala (veggie fritter). Both were crispy and delicious, but fairly mildly flavoured - I should have ordered the optional chilli sauce. 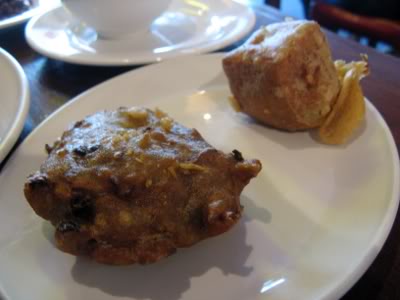 Next up was a three dish combo plate: vegetables with coconut, fried potato and green beans. The liberal sprinkling of toasted coconut added some interest to a fairly rudimentary cabbage stir-fry, while the little fried potato cubes had a delicious sweetness to them. But both were overpowered by the green beans, which were generously dosed with chilli and had a hot vinegary kick. They were outstanding, but did benefit a bit from having the milder accompaniments to spread out the heat. 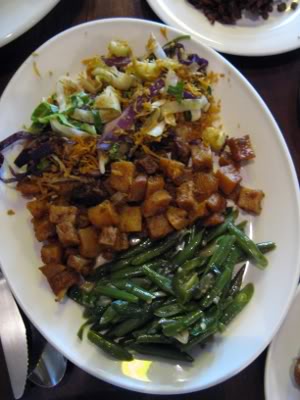 The vegetarian curry was a mild and coconutty dish, with a good mix of fresh vegetables swimming in delicious gravy, but the star of the evening was the tempeh. Our love for tempeh is no secret, and this was a crispy, sweet ode to the stuff. The kind of dish that makes me want to travel straight to Indonesia and eat nothing but tempeh for a month. 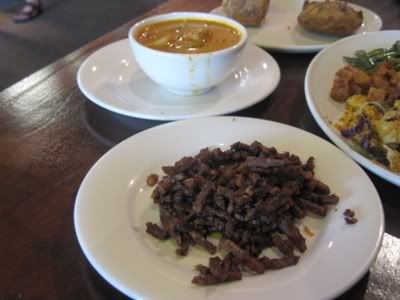 Warung Indonesia was a stunner - a veg-friendly Indonesian restaurant was not high on the my mental list of places we were likely to stumble across in Hobart. They're cheap, friendly and serve up a wide array of great dishes. I'm not sure whether they vary much week to week, but we'll definitely go back to find out next time we're in town.
____________

Accessibility: There are a couple of steps up as you come into the restaurant, and ordering takes place over or around a fairly high bain marie (see photo above). There's a reasonable amount of space throughout the restaurant, and payment happens at a low cash register area.
Posted by Michael at 10:21 am