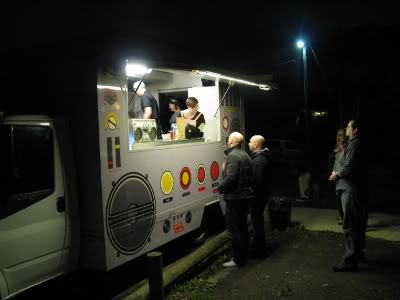 We've stopped by Beatbox Kitchen a few times in the last six months. They roam around the inner suburbs, usually loitering northside and often favouring the intersection of Rathdowne and Park Streets. Our first visit in early autumn felt almost like a festival - the adjacent green space was occupied by many dozens of urbanites, most with a bike and some with a child in tow, the best prepared carrying picnic rugs or BYO booze. Now it's much quieter, with just a few clusters of hoodie-clad folks close by. 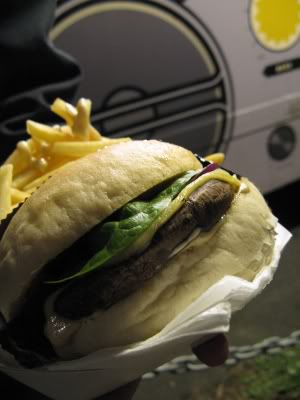 The menu's short and sweet: a beef burger, vege burger, fries, water and Coke.  I'd rate the Shroom Burger ($10) as one of the best around. It's a generous but not over-the-top portion in a nicely designed wrapper that catches the worst drips. The bun is light yet sturdy enough to hold everything together and soaks up the juices from the whole mushroom that serves as a patty. There's also melted gouda cheese, tomato, lettuce, onion and stereo sauce. I believe that they'll cater to vegans on request by omitting the cheese and replacing the mayo-based sauce with tomato relish. It's a good deal, as I think I'd be just as happy without the cheese anyway.
The fries ($5) are also decently portioned, and in the non-greasy shoe-string style. I'd just prefer a heavier hand with the sauce.
Given Beatbox are not providing a venue, as such, you might consider this meal on the steep side. But for a vege burger as good as this one I'm willing to cough up.
____________
Beatbox's shroom burger has inspired poetry at The Big V. Its other wares also earn nice words at MEL: HOT OR NOT, FreshToast, Dave Plus Food, things that make you go POO and Multicultural Melbourne.
____________
Beatbox Kitchen
Location announced via twitter and facebook
veg burgers $10 each, chips $5
http://www.beatboxkitchen.com/


Accessibility: This will vary mostly with location, however the counter is very high.
Posted by Cindy at 8:46 am