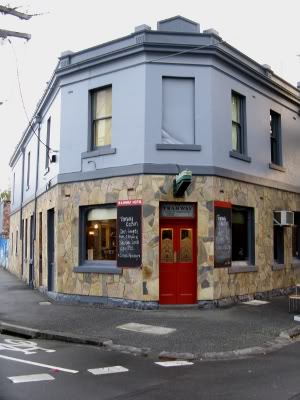 A few pub-club members had been keeping their eye on the gradual transformation of the Tramway from casual and foodless local to a fancier pub with a serious food focus. In March we heard that it had opened, but that the kitchen wasn't sorted yet, so we bided our time. And then, typically, Brian at Fitzroyalty beat us to the punch. Regardless, we were keen to check it out - going so far as to shift from our usual Monday nights (when the Tramway is closed) to a Sunday evening. 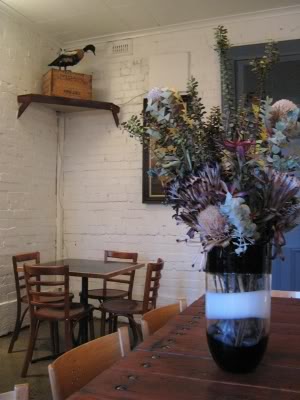 Turns out the Tramway has been taken over by Chris Crouch, formerly of Candle Records and Polyester. It's all a bit upmarket in comparison to what used to be here, with lots of wood and polished concrete, but it's still a pretty cosy space - a crackling fire, lots of big windows and plenty of space to spread out in. The menu is mostly about burgers, with eight to choose from (including two vegan options!), along with a smattering of mains and appetisers (including a few more vegan and veg-friendly options). Cindy and I couldn't resist the siren song of the burger and chips, so we picked out the two vegie options. 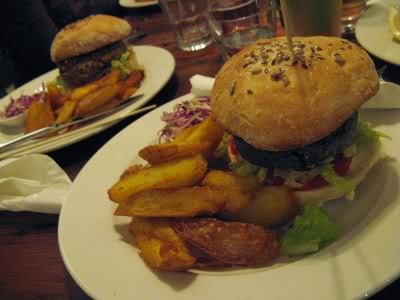 I had the quinoa and hummus burger (quinoa, hummus and fresh basil pattie, topped with vegan friendly almondnaise, salad, tomato relish and chips, $16), which is pictured in the background above. The patty was excellent - the hummus was strong without being overpowering, and the relish and almondaise added some complementary flavours. It wasn't the sturdiest patty of all time - I ended up making quite a mess of myself - but it was definitely worth the mess.

Cindy went for the portabello mushroom (portabello mushroom, thyme and burghul pattie, topped with ‘facon’ tempeh, almondnaise, salad and tomato relish and served with chips, $16). It's a rare mushroom burger that involves anything more than a big ol' slab of mushroom filling in as burger patty, and I was impressed to see they'd come up with a more interesting approach. It's pretty dense, and tastes fairly mushroomy, but doesn't have the typical issue of excess mushroom juice soggying everything up. I really enjoyed the few bites of this that I snuck, but Cindy found it heavy going by the end - it's a thick and hefty burger filling. The mention of tempeh bacon had us both excited, and kudos for the Tramway for offering it, but it couldn't live up to the standards Cindy has set around these parts. Not to say it wasn't good, but it needed to kick the flavour up a notch (more liquid smoke maybe?) and lacked the slight crispiness I was hoping for. Still, it seems churlish to complain - its very existence on the menu is pretty amazing.

A brief word of praise for the chips - thick cut, skin on, with lots of crunch and some generous seasoning (read: salt). When it comes to pub food, chips are a key issue, and the Tramway more than measures up.

The Tramway is a pub-club winner - lots of nice beers on tap, friendly service and a pretty damn impressive menu. I'd say, "we'll be back," but it's too late - we've already been back.

Read other points of view at Fitzroyalty and Temasek.


Accessibility: There's a small step and a fairly narrow door as you go in, but plenty of space inside. Ordering and payment occurs at the high bar. The toilets are outside through a fairly narrow courtyard, and not particularly roomy.
Posted by Michael at 11:40 am