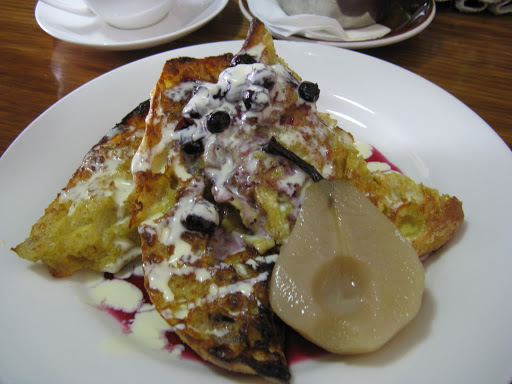 Our ongoing dynasty of inner-North breakfasts took in another stop last weekend. A reasonably new place tucked away on Scotchmer Street near Dench Bakery (which, shamefully, we've yet to blog). Our Fitzroy informants Mike and Jo put us on to the place and the joined us, along with Kerrie and Daniel for a Sunday morning sampling. Things start pretty slowly on the North Island - we got there at 9:30 and there was only one other person there. It was pumping by the time we left though, so it'd be wise to turn up before 10:30 when North Fitzroy wakes up.

The menu is chock full of vegie options - from $4 bagel 'n' jam to $9.50 slow-roasted tomatoes. Cindy (along with Jo and Daniel) couldn't resist the bombay toast, served with blueberry compote, pear and orange blossom cream. Just look at it up there - all slathered in orange-blossom cream and soaked in berries and sauce. The toast was thick and rich without being as greasy as French toast can be. The pear was just the icing on the cake. The toasty, creamy cake. 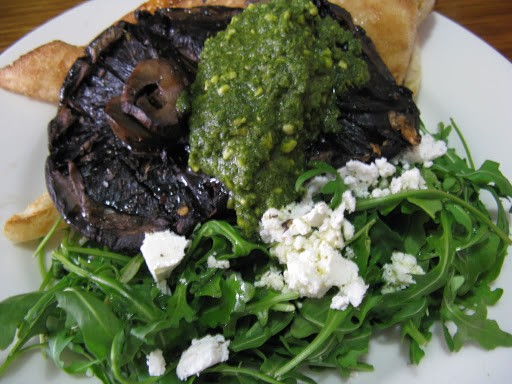 I typically opted for a savoury meal: lemon and herb roasted field mushrooms with rocket, pesto and fetta served on some toasted Turkish bread. The mushrooms were cooked to perfection, the pesto was full of flavour without being overpowering and contrasted perfectly with the fetta. This was a fine, fine breakfast - even without eggs! Who'd have thought?

I should mention the coffee too: rich and strong without being harsh - one of the better ones I've had.

The only negative of the whole morning was the timing of the meals - the three of us who ordered savouries got ours long before the Bombay toast arrived. In fact, I think I'd basically finished my mushies by the time Cindy was starting on her sweets. It's a ridiculously small kitchen, so it's understandable - maybe it's better to turn up in smaller groups.