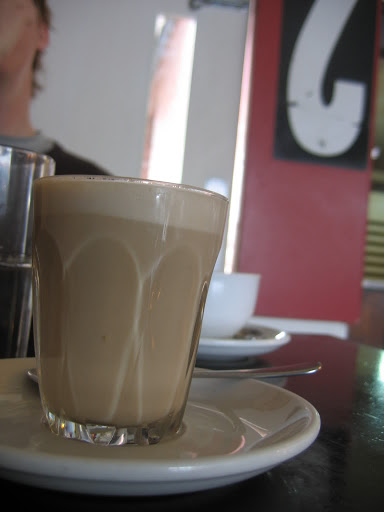 With Cindy heading off to Tasmania in the afternoon and nothing much planned for the morning, we decided to wander up to East Brunswick and find ourselves some breakfast. I was particularly hungry, so by the time we were in the cafe-heavy area of Lygon Street, the choice of venue was all down to whichever came first. Luckily, the winner was Small Block - a well-regarded cafe that we'd yet to visit. Thanks to our fairly early start, there was plenty of room available and we slotted into a corner table and studied the menu on the wall. The savoury options aren't particularly veg-friendly, with just a couple of non-bacon (or salmon) choices, while the sweet section of the menu was rich and varied.

Of course, I stuck with my savoury preference and chose the 'summer breakfast' - poached eggs with beetroot relish, avocado, spinach and feta ($14). The beetroot relish was an interesting addition to a fairly standard brekkie - it provided a nice flavour contrast with the salty feta, but it proved too sweet for me in the end. I could probably have managed with half as much. The eggs were perfectly poached and the feta was very tasty indeed. Throw in half an avocado (which was nice and ripe) and some delicious toast and you've got a very satisfactory breakfast indeed. The coffee was nice too, which was the icing on the cake. 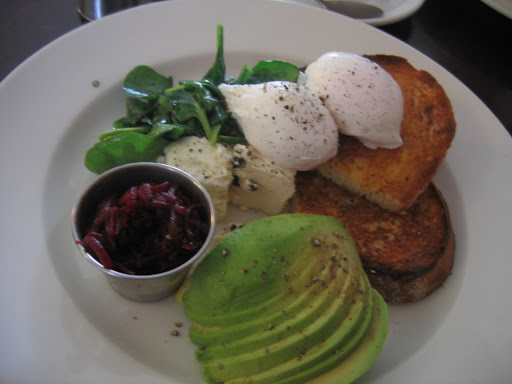 Speaking of cake, Cindy ordered ricotta pancakes, which came with vanilla saffron pears and Barbados cream ($13). The pancakes were very sweet and cakey and the Barbados cream was also pretty sugary. The whole thing was right at the dessert end of the breakfast spectrum, and probably not something you'd order very often. At least if you were me. Cindy had a chai latte to drink and found it super-gingery - possibly because she was complaining about the weak, flavourless chai at a different cafe while hers was being made. 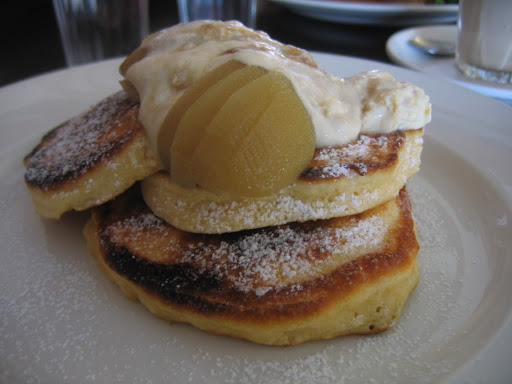 The food was pretty good, the service friendly enough and the atmosphere pleasant. It's probably short a few vego options for my taste and with Gingerlee and (the still unvisited) Poached nearby, it may be a while before we head back.