Sweet stuff in Hoi An 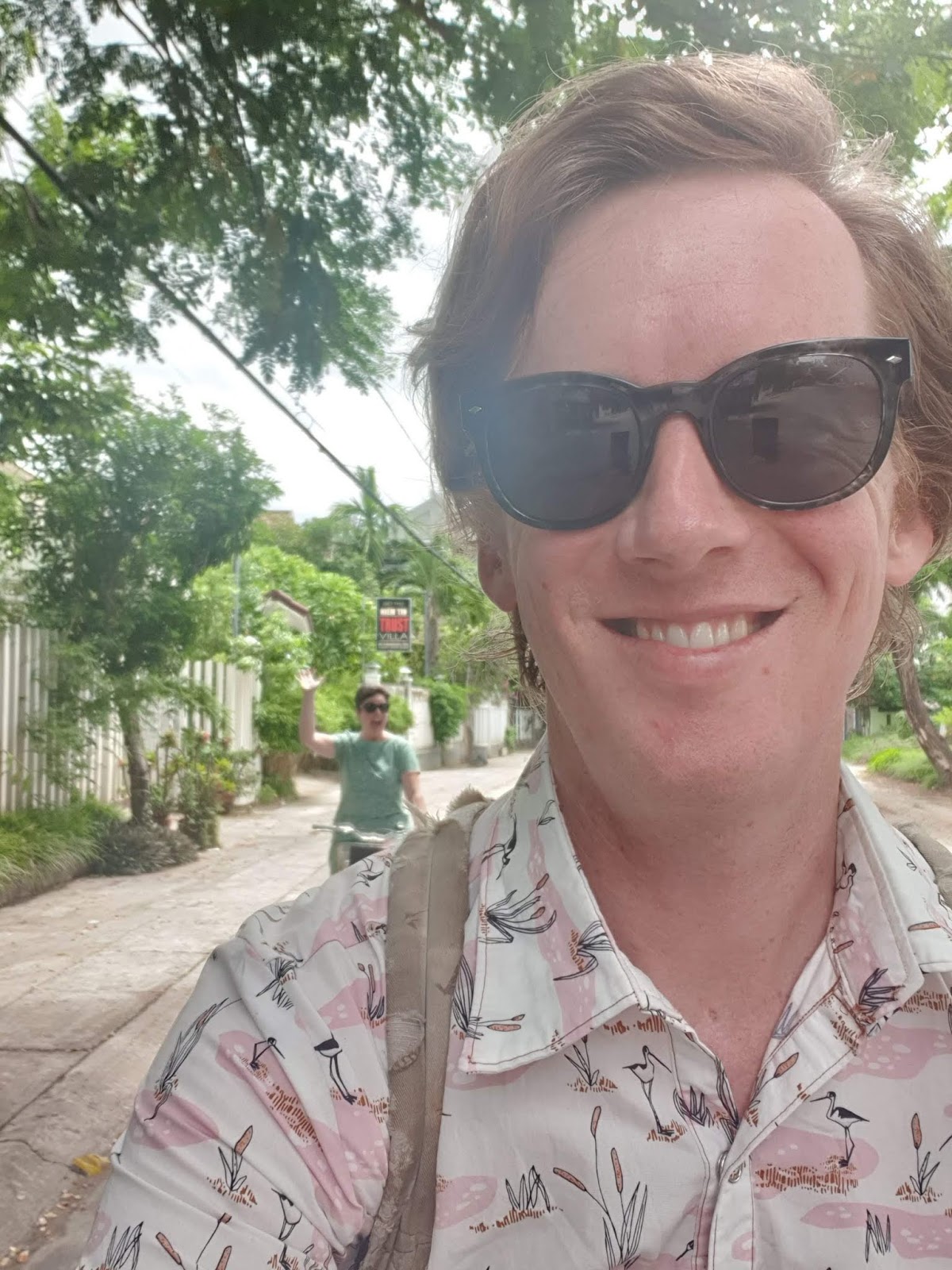 It's no secret that I've got a sweet tooth, so naturally I was keeping an eye out for desserts on the menus throughout Hoi An. The most common offering was a couple of pieces of fruit at the end of a meal, and that was indeed a fitting and refreshing end when the evening was warm and we'd already eaten plenty. But here are a few other treats we snuck in along the way.
____________ 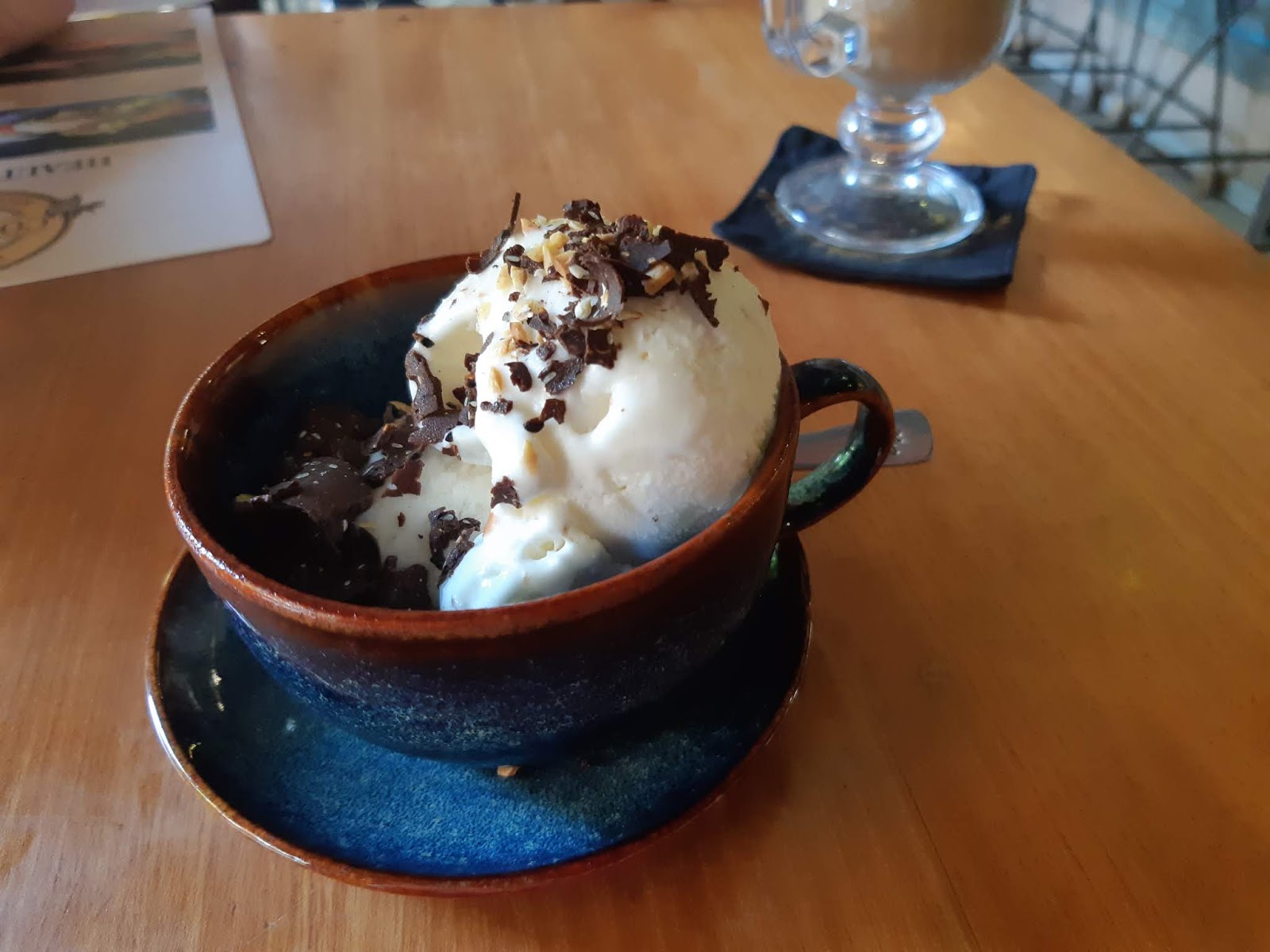 We came across a couple of Cocobox cafes on our first day exploring the ancient town. It's clearly aimed at tourists, with its wifi and its extensive drinks menu providing a cheap means of accessing said wifi. We stopped in when we were hot and tiring of walking, and I was primed for a Coco Choco (75000 VND ~ AU$4.85). This was a cute little cupful of creamy coconut icecream, topped with toasted coconut and thick flakes of dark chocolate. It was really special, a lovely contrast of dark and light flavours. 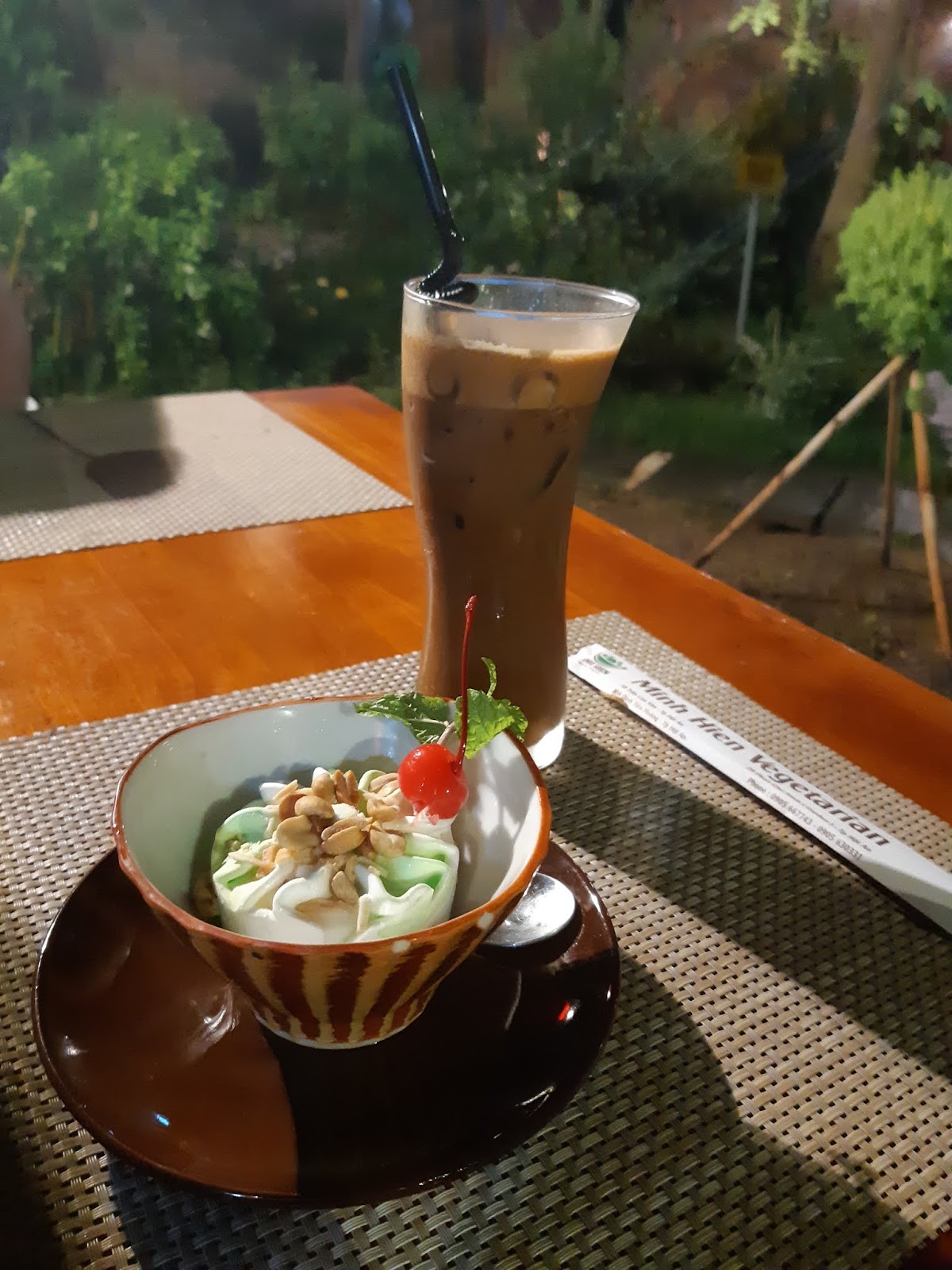 Michael's already mentioned our splendid dinners at Minh Hien, and I left room for dessert on our first visit. Here I was most drawn to the young rice icecream (45000VND ~ AU$2.90). Swirled with pandan and sprinkled with peanuts, it looked a little like someone lopped the top off a Cornetto! The first mouthful had a bright rice-and-pandan flavour, but my palate rapidly lost sensitivity to its subtlty.
____________ 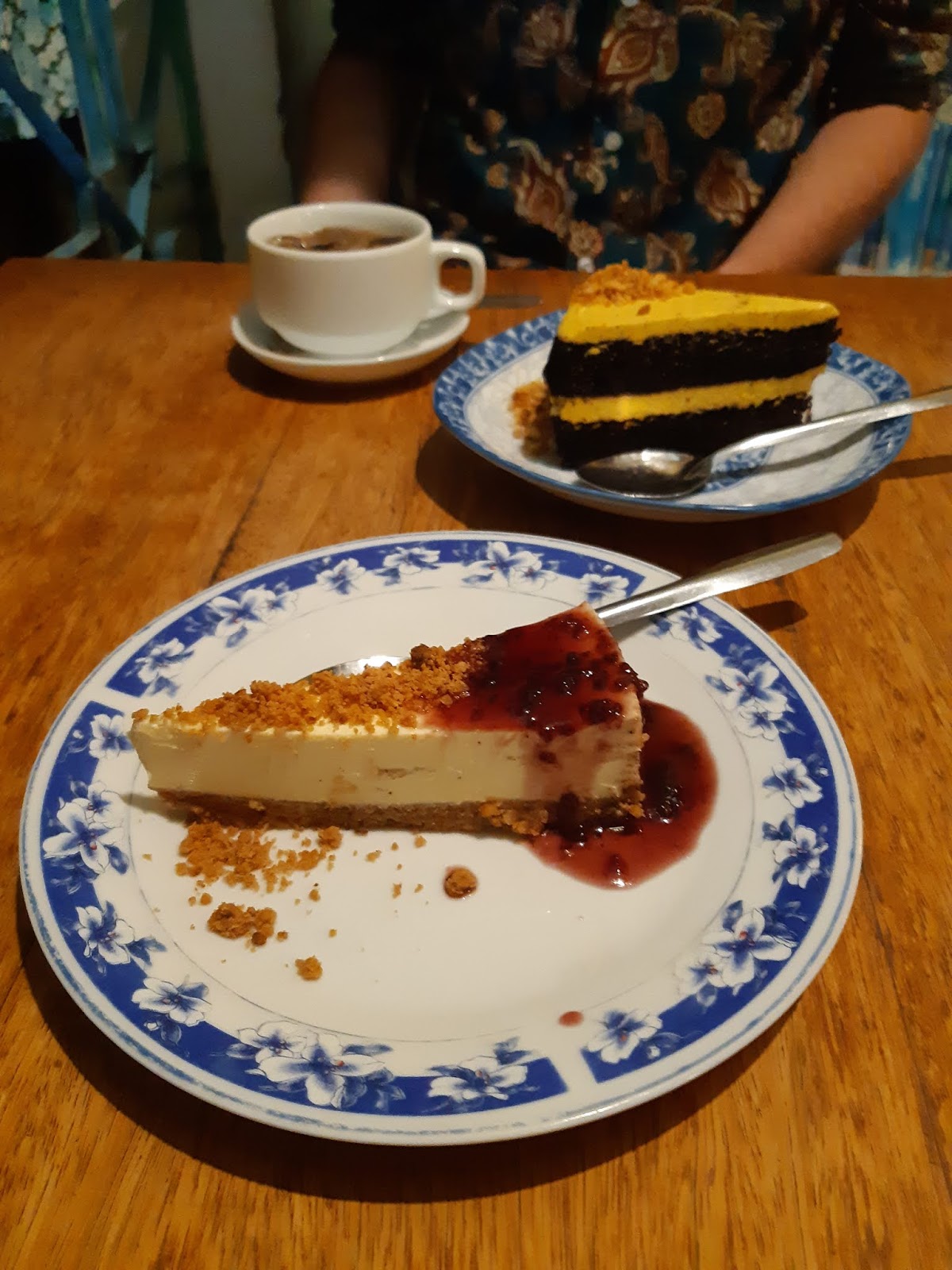 The fancy Nu Eatery had a very European little dessert list of cakes and pies (55000VND ~AU$3.55 each), very well executed. We doubled down on a cheesecake with mulburries and cashew crumble, and a mocha cake layered with spiced cream cheese and sprinkled with peanut brittle.
____________ 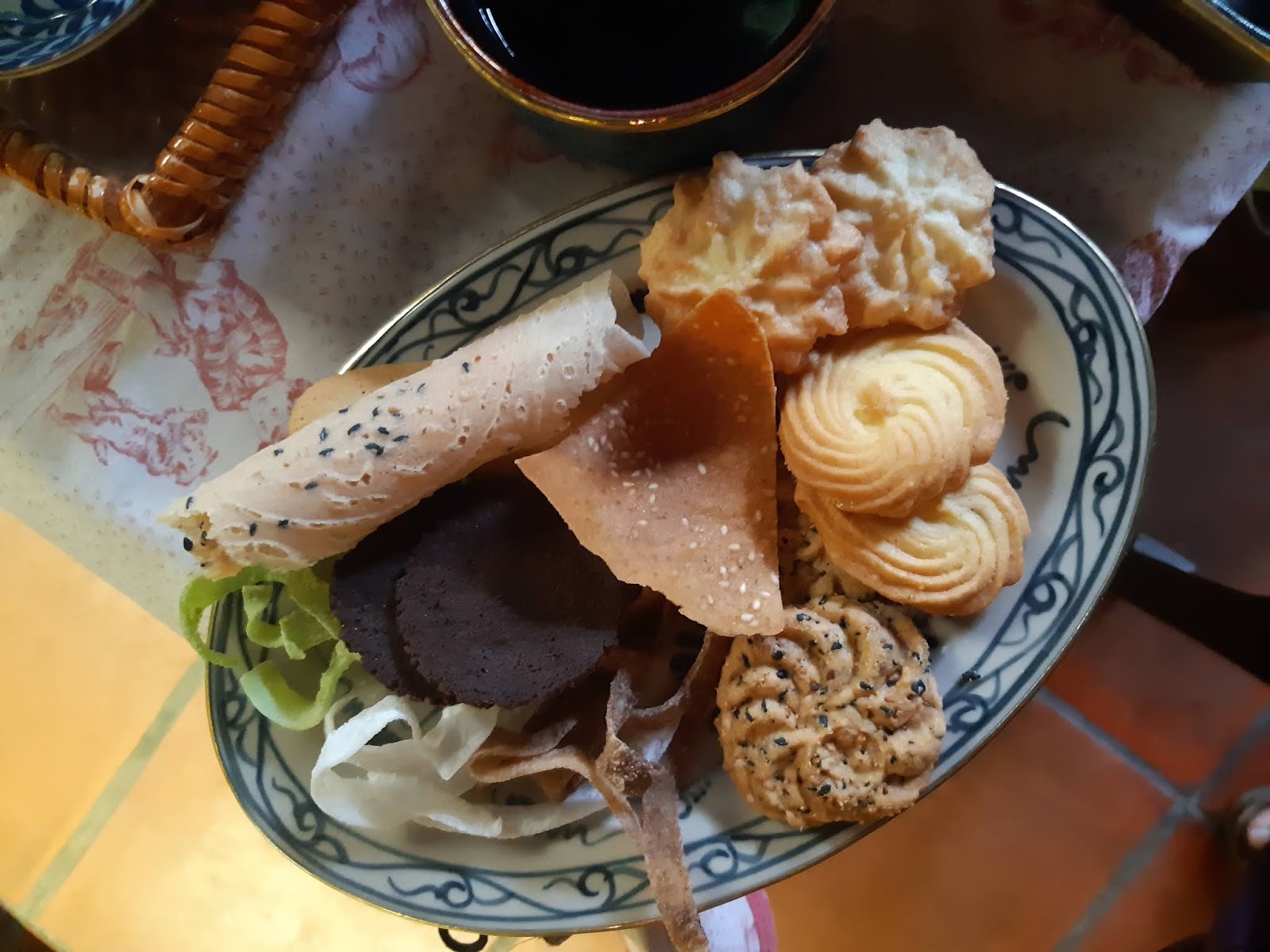 We have our friend Ash to thank for steering us towards the beautiful tea house Reaching Out, which provided a timely refuge from a heavy downpour. It's a social enterprise that employs local people with disabilities and stocks fair-trade teas and coffees; there's a rule of speaking minimally and quietly inside and we were happy to honour it during our break. We kept our mouths busy with a sampler of their biscuits; this array of crunchy morsels was flavoured with the likes of ginger, passionfruit, coconut, black sesame, sweet potato and chocolate. Most novel for us were the long ribbons of sweetened, flavoured and dried coconut.
____________ 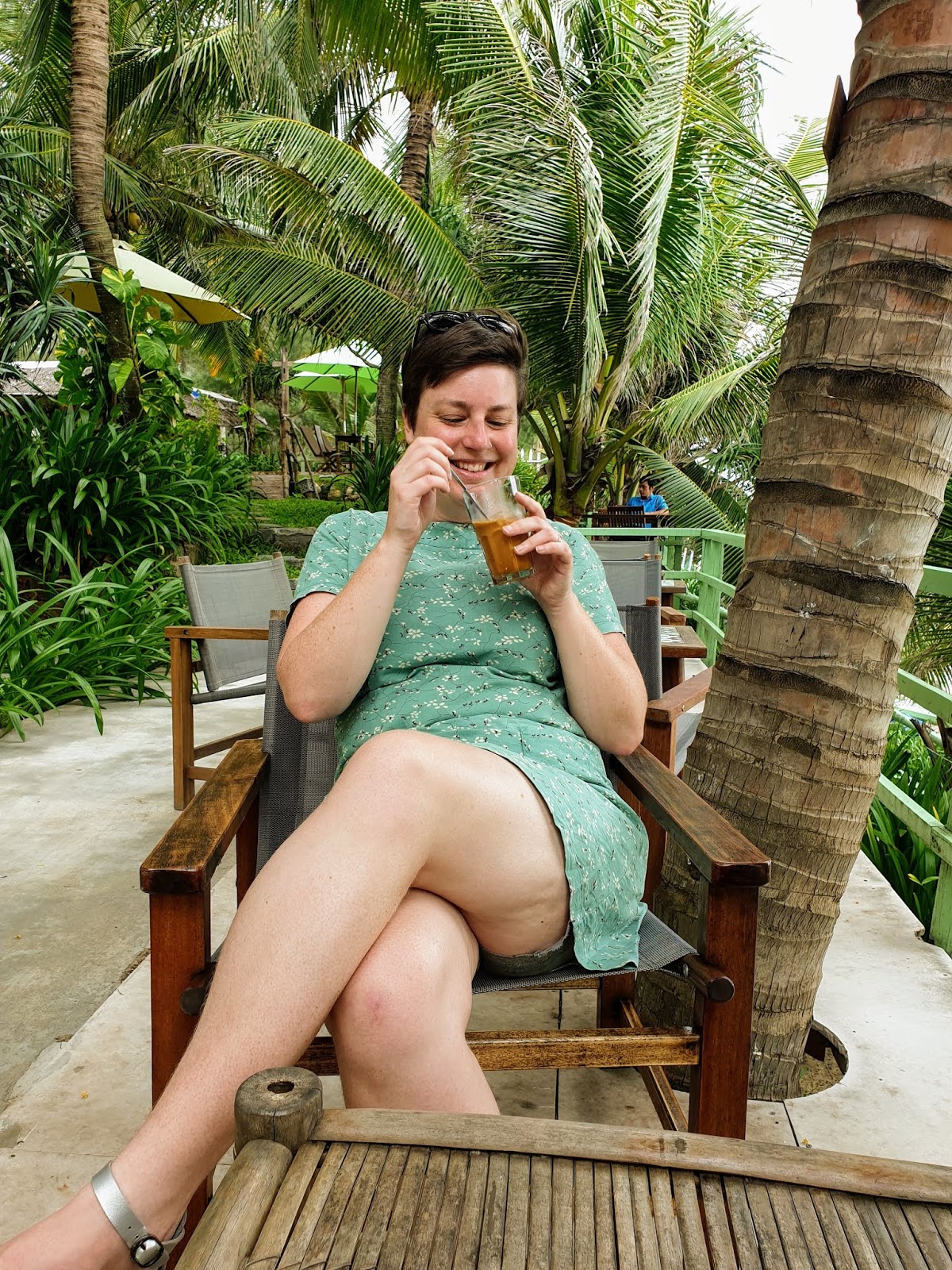 Michael and I are almost polar opposites when it comes to coffee in Melbourne: Michael can't do without one or two each day, while I don't drink it at all. In Vietnam, we're agreed that the sweetened iced coffees are awesome! They're easily the most common sweet thing in Hoi An, and we ordered them almost daily while we could, at any time from breakfast through to after dinner. Well, Michael was game - I'm more inclined to restrict my caffeine intake to daylight hours on hot, distant holidays.
Posted by Cindy at 8:49 pm