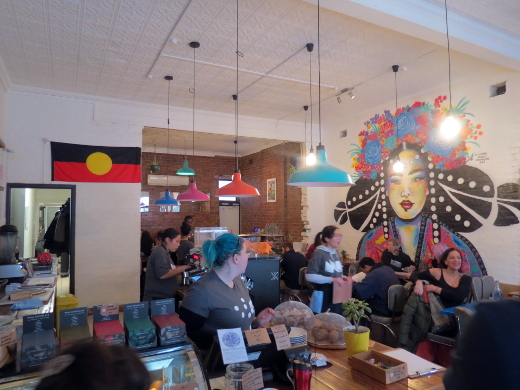 We noticed Handsome Her almost as soon as they posted their coming soon note on the door. This cafe's located within our regular roaming distance on Sydney Rd, and we were curious to see what would replace the unexpectedly-departed Bar Estrella. 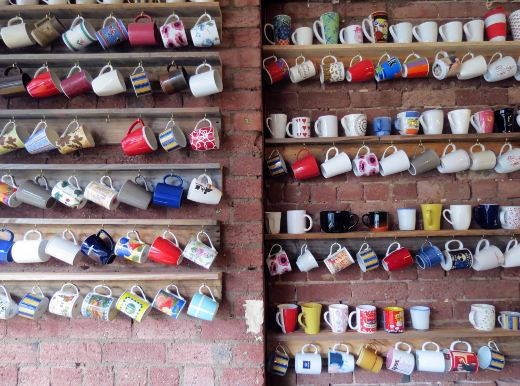 The note included news that cheered us and attracted a little media attention: Handsome Her would not stock takeaway coffee cups. Instead, customers seeking their morning shot could take a standing spot for a discounted price (as it's done in Italy), bring in their own cup or grab something reusable from the emergency mug wall to take away. 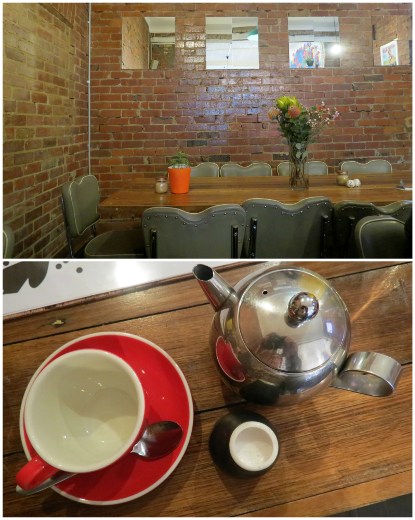 A second resolution attracted even more, and more mixed, attention. Handsome Her is an explicitly women-centred space, holding social justice, feminism, community development and, yep, environmental responsibility as its core values. As a consequence, they invite male customers to pay 18% more on their visits than other customers to redress the gender-based pay gap, with proceeds directed to a women's service. 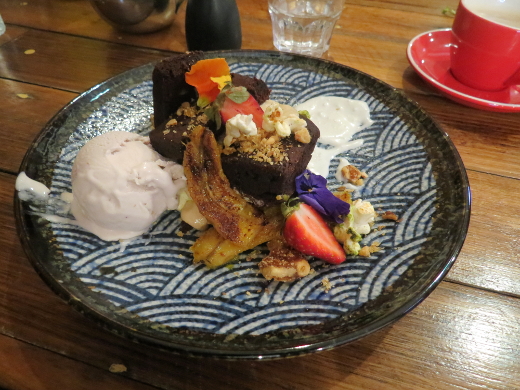 While Handsome Her's values are serious, the atmosphere is upbeat. The 100% vegan menu includes four kinds of 'milk', coffees, teas, novelty lattes, smoothies and blended-ice beverages. Meals are named after inspirational women, and are all complex concoctions with sauces, sprinkles and edible flowers. (That some of the staff previously worked at Glass Den makes sense!) Just about everything has a gluten-free option.

I had eyes only for Michelle Obama ($20, pictured above), a plate that starts with brownie hotcakes. These didn't have the depth of cocoa that I'd hoped for, but all the trimmings kept my taste buds active: peanut butter mousse, caramelised saffron bananas, salted caramel brittle, lemongrass infused coconut cream, matcha popcorn and strawberry baobab icecream. 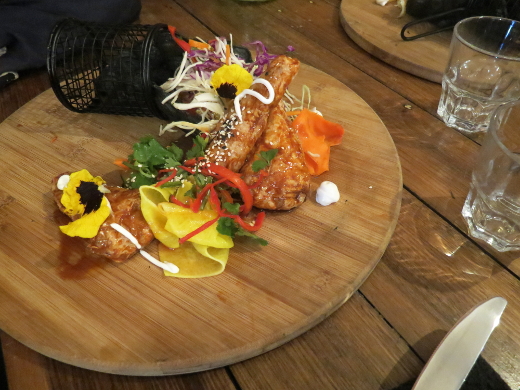 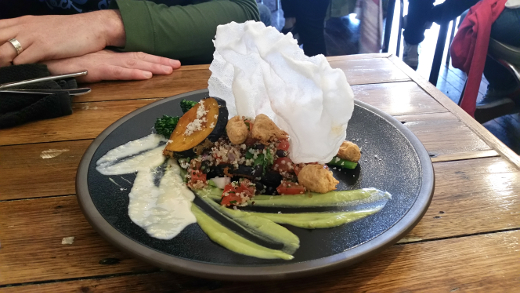 The following weekend, we returned to venture further into the menu. Michael selected more mock in the Yoko Ono ($18.50), a slightly more restrained plate of polenta-crusted eggplant, quinoa black bean tabouli, roasted broccolini and chicken nuggets, with streaks of avocado puree and goma emulsion and an oversized spicy rice cracker. 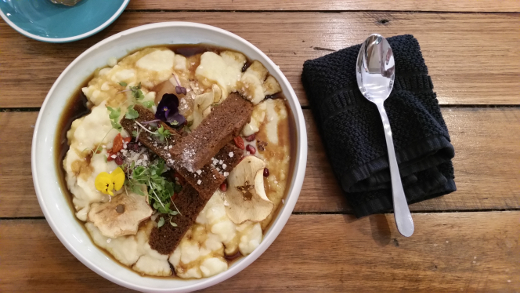 I settled in with Celeste Liddle ($15.50), a bowl of polenta porridge with plentiful fruit and nuts - dates, pistachios, pomegranate and apple three ways (fresh, dehydrated chips, and cooked down into a sauce). It's finished off with the requisite flowers and microherbs, plus Gula Melaka syrup and gingerbread batons. Not much could tempt me away from brownies for breakfast, but this did it and it could win out again.


Even in these first harried weeks of trade, we received confident and efficient service from unfailingly friendly staff. We're looking forward to ticking off what remains of the menu, and likely becoming regular local customers in the process.
____________


Accessibility: The entry is flat, and tables are densely packed with a clear corridor through the middle of the cafe. We ordered at the table and paid at a low counter. We haven't visited the toilets, but we noticed a 'wheelchair accessible' sign beside the directions leading to the loos.
Posted by Cindy at 2:19 pm