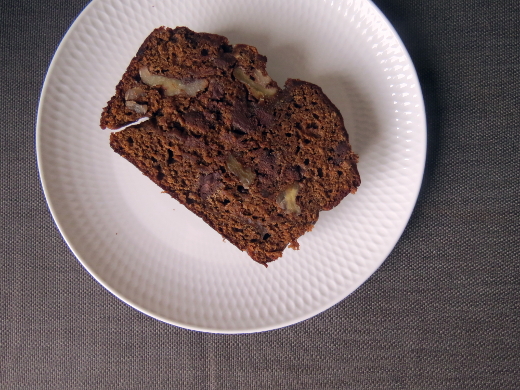 I have nothing new to share with you here. You already know that over-ripe bananas are perfect for banana bread/cake. And you already have at least one great recipe for that (I've got about six such posts on the blog, myself). And what's more, I bookmarked this one from a blog in 2008.

But, but, but. This cake includes molasses, and that changes everything. In the raw batter it's too dominant, too minerally; in the baked cake it's mellow and malty. The bananas aren't as distinct as they are in other banana cakes, they're just supporting the overarching sweetness agenda and ensuring a dense, moist crumb no matter how volcanic and crusty the cake's surface becomes. 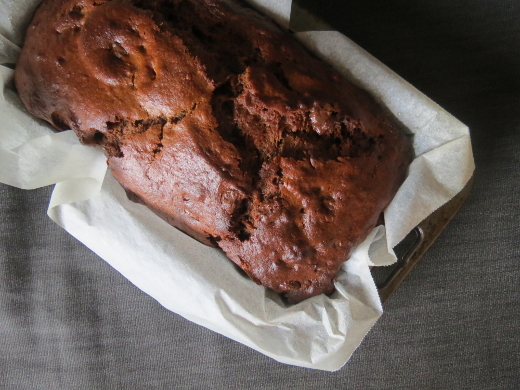 I stirred dark chocolate chips and walnuts into my banana and molasses cake, and cut thick slabs of it for afternoon tea over the course of a week. (It wasn't robust enough to sustain slices less than about 15mm thick.) I like that walnuts are a bit softer and woodier than most other nuts, melding a little into the cake and lending only a subtle texture contrast.


Banana & molasses cake
(slightly adapted from Yeah That "Vegan" Shit,
where it's credited to Veganomicon)

Heat an oven to 180°C. Line a loaf pan with paper and lightly spray it with oil.

In a large bowl, thoroughly mash the bananas until as smooth as possible. Stir in the apple puree, oil, sugar and molasses, whisking to combine. Sift in the flour, bicarb soda, cinnamon, nutmeg and salt, and stir until just combined. Fold in the chocolate chips and walnuts.

Pour the batter into the loaf pan and bake it for about 45 minutes, until a skewer inserted into the centre comes out clean (it's OK if the batter still feels a bit damp!). Allow the loaf to cool a while before slicing and serving.
Posted by Cindy at 9:36 pm