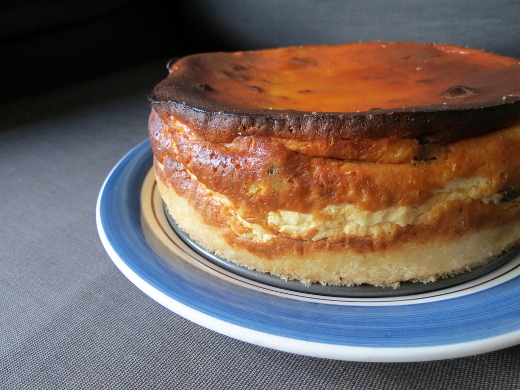 Michael received some good career news recently! He was out of town at the time, so it was a few days before we could celebrate together. I used that time to plan and bake this congratulatory cake. This recipe's been tucked among my bookmarks for more than five years, and I picked it out because Michael's fond of rum and raisins in desserts. 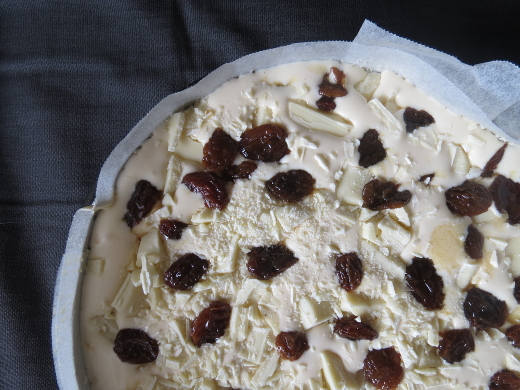 It might be the least vegan thing I've ever made: there's three kinds of dairy, white chocolate, eggs and honey all whipped in. It's a cheesecake, but it's different to the cheesecakes I'm accustomed to. Instead of a crushed-biscuit base there's a thin layer of plain white breadcrumbs to give the cake some structure. The filling's flavour and texture come mostly from the ricotta; it has that velvetty density of a baked cheesecake but perhaps a little less sweetness. That comes more from boozy raisin bursts. 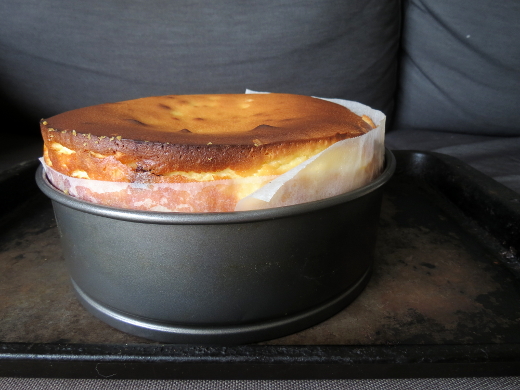 The cake batter filled my springform pan right up to its rim. As it baked it rose further, like a souffle! (It sank back to rim height again as it cooled.) Almost all of the white chocolate melted into the cake, undetectable. The finished cake isn't pretty - it's pudgy and uneven, with charred rings and bubbles on its surface. But I loved its geological-looking layers and heartiness. This is a feast of a cake. 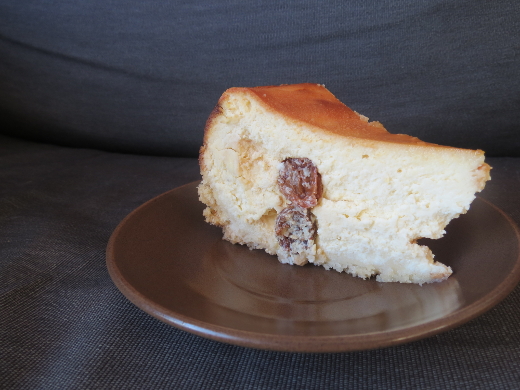 Rum & raisin ricotta cake
(slightly adapted from green been,
where it's credited to Karen Martini)


Place the raisins in a small bowl or airtight container and pour over the rum; allow them to soak for at least an hour, ideally overnight.

Preheat an oven to 170°C. Line a springform cake tin with paper and lightly spray it with oil. Sprinkle the breadcrumbs over the base and a little up the sides (don't worry if they don't stick much).

In a large food processor, beat together the ricotta and sugar. Beat in the eggs, one at a time. Beat in the honey, yoghurt, mascarpone and lemon zest. Pour one-third of the mixture into the cake tin, then sprinkle over the half of the raisins and white chocolate. Repeat with cake mixture, raisins and white chocolate. Pour in the remaining mixture and smooth over the top.

Bake until set, about 1 1/4 hours. Brush some honey and rum over the top of the cake while it is still warm. Serve at room temperature.
Posted by Cindy at 7:49 am