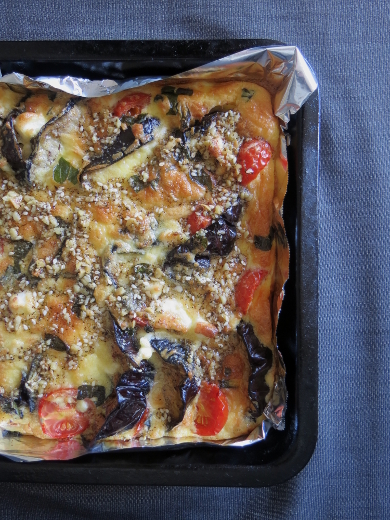 I picked this recipe out of Plenty More with the express purpose of using up some ingredients (cream cheese, eggs, za'atar) but we'd make it again on its own merits. It's kind of a crustless quiche, although the main feature is really a dozen or so melt-in-the-mouth eggplant slices, and the cherry tomatoes nestled among them. 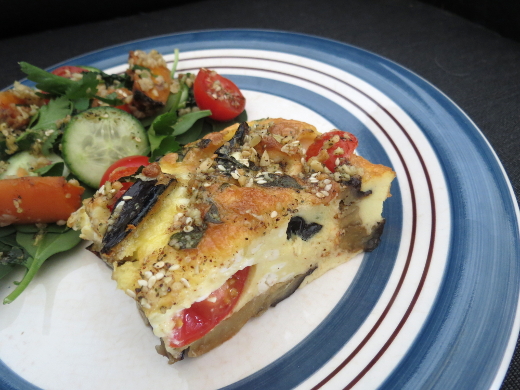 The egg-and-dairy filling is more of a light, fluffy binder with the odd dot of sharp feta. Fresh oregano leaves and a last-minute sprinkle of za'atar bring some complexity to the flavour - all this savoury 'cheesecake' needs is a simple green salad on the side to make up a pretty warm-weather meal. (You might spy some leftover carrot salad filled out with spinach and tomatoes in the background.)


Preheat an oven to 210°C. Line a large baking tray with paper

Slice the eggplants into 2cm thick rounds and lay them out flat on the baking tray. Drizzle the eggplants with most of the oil and sprinkle them with salt and pepper. Roast them for 40 minutes, until they're soft and golden but not falling apart. Allow them to cool.

Turn the oven down to 170°C. Line a 20cm square baking tin with foil and lightly spray or brush it with a bit of oil.

In a medium-large bowl, beat together the cream cheese and cream with an electric mixer. Beat in the eggs, one at a time. Crumble over the feta and beat it in too, but allow the feta to stay a bit lumpy. Mix in a little salt and pepper. Slice the cherry tomatoes into halves.

When the eggplant is cool enough to handle, layer the slices into the foil-lined baking tin. Sit them upright or diagonally, so that they're partially overlapping and not flat and on top of each other (check out my photo above). Arrange the tomato halves in between the eggplants, filling all the gaps. Tear up half of the oregano and sprinkle it over the eggplants and tomatoes. Pour the cheesecake mixture into the tin, gently guiding it to evenly cover the vegetables. Tear up the remaining oregano and sprinkle it over the top. Bake the cheesecake until it's set and golden, 35-40 minutes.

Mix the za'atar up with a tablespoon of olive oil and drizzle it over the top. Serve warm or at room temperature.
Posted by Cindy at 9:39 am