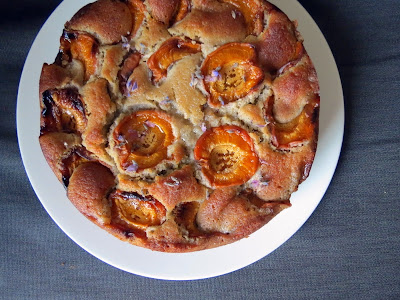 Cindy spent most of January up in the Alpine National Park working like crazy and barely sleeping while I lived a life of leisure back in Melbourne. So it seemed only fair that I welcomed her return home with some sort of cake-ish reward. I had the perfect cake in mind – fellow potluckers had presented a stunning apricot-covered cake at our recent Plenty More-themed dinner and I decided I’d try to replicate their achievement despite its seeming complexity. What’s the worst that could happen? If the cake was a complete disaster I could just scoff down the wreckage and make another weird ketchup cake to replace it.

For all its fanciness, the recipe wasn’t actually that complicated – there was a bit of faffing around grinding up nuts, zesting lemons and beating eggs, but the basic processes were all well within my non-baking skill set. The biggest difficulty was locating some lavender – our plant wasn’t flowering and none of Brunswick’s fancy food purveyors seemed to sell it, so I was reduced to wandering the backstreets and ‘foraging’ some flowers from someone’s front garden. Thanks anonymous Barkly Street benefactor!

The end result: a qualified success. This cake is super delicious with the sweet, juicy apricots really coming into their own. The downside is that the apricot juice soggifies (a technical term) the top of the cake a bit - it definitely needs the full 70-80 minutes in the oven and could probably handle longer if you covered the top to avoid burning anything. I gave it about 75 minutes and the mix was still a little bit underdone – it didn’t really diminish its deliciousness, but it made slicing it up a bit tricky. Still – I was pretty thrilled to be able to present this fruity, floral delight to Cindy on her return from three weeks of exhausting work. We’ll definitely make it again – at least if we can think of a non-vegan non-coeliac audience to appreciate it (or maybe we should try to veganise it!?).


Apricot, walnut & lavender cake
(based on a recipe from Ottolenghi's Plenty More)


Preheat the oven to 190°C. Lightly grease a 25cm spring-form cake tin (if you're using a regular tin you probably want to line it with baking paper).

Beat the butter, oil, sugar and almond meal in an electric mixer until the mixture is combined and is light and fluffy. Add the eggs in slowly, beating as you go until they're incorporated. Fold in the walnuts, flour, vanilla, lemon zest, salt and half of your lavender.

Pour the cake mix into the tin and smooth out the top. Arrange the apricot halves on top, skin side down as tightly packed as you can squeeze them in. Bake in the over for 70-80 minutes - it's a delicate balance between the top burning and the cake cooking through, you can cover it with foil if it gets too brown.

While the cake's in the oven whisk together the icing sugar and lemon juice until you get a smooth pourable consistency. Once the cake is cooked, spread the icing on top (a brush works well) and sprinkle over the remaining lavender. Leave the cake to cool and then feast.
Posted by Michael at 7:55 am