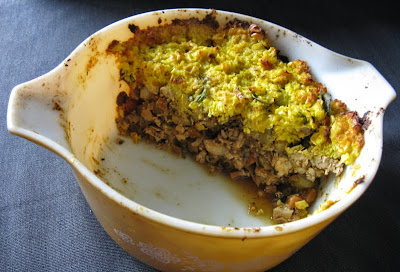 Cindy has left me to fend for myself while she falls in love with Wholefoods and other North American goodies. I must confess that for the first week I ate a lot of restaurant meals. When the weekend rolled around I finally got my act together and cooked for myself, tackling one of the more involved recipes from Viva Vegan.

I'm a sucker for a good tempeh-based stew, and the pie filling here combined the nutty tempeh flavours with some saltiness from the olives and sweetness from the currants. The topping had a hint of sweetness to it as well and was creamy and crispy in all the right places. The whole dish is a fair bit of work, but it tastes good enough to justify the effort and will feed you for the best part of a week.

Steam the potato until it's just cooked, about 15 minutes, and then steam the tempeh for 10 minutes.

Once the tempeh has cooled a bit, crumble up the cubes as best you can - the filling should resemble a kind of thickly ground mince.

Heat the oil in a large frying pan and fry the onions and carrot over medium heat for about 10 minutes, until the onions completely soft.

Add the wine and stir - it will cook off pretty quickly. Stir in the cumin, oregano and paprika and then add in the tempeh, potato, stock, soy sauce, raisins, olives and the pepper. Simmer for 5 minutes, stirring and then remove from the heat.

Lightly oil a casserole dish - I used a round one about 25cm across - and pour the filling in.

In a food processor, combine the corn kernels, corn flour, cream, garlic, salt and pepper and whiz until it's a thick, creamy paste.

Heat the oil in a large saucepan and add the corn mixture, stirring, until it thickens (about 10 minutes). Remove from the heat and stir in the basil. Spread the mixture on top of the tempeh filling and sprinkle over the sugar.

Bake for 45 minutes, or until the top has browned up nicely. You can char the top up under the grill for a few minutes at the end if you really want a crunchy shell, but I didn't think it really needed this step.
Posted by Michael at 10:22 am