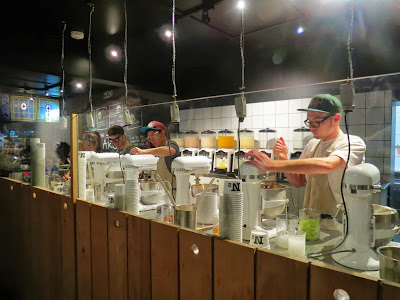 With half of our Thai dinner packed away for later, I had room for dessert and persuaded Michael to stop by N2 with me. I was keen to see what kooky combinations were currently on their menu after lamenting the LAB's somewhat staid flavours the other week. 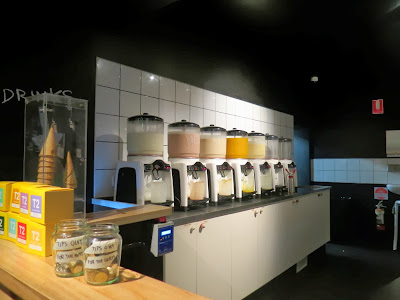 Actually, N2 Fitzroy has toned down the 'weird science' theme compared to its Sydney sibling. Though there are safety goggles for staff and copious clouds of nitrogen vapour, I didn't see any conical flasks, white coats or antiquated instruments - they were going for a cuter vibe of LEGO figurines and plush toys with their fake grass. 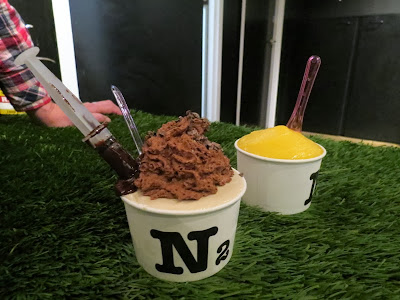 The flavour selection seemed toned-down too, mostly variations on chocolate and lemon, but this was probably just the luck of the week - their wall of past flavours harks back to days of kaya toast, vegemite, miso caramel and Earl Grey. The major moment of novelty was the syringe full of chocolate ganache served with the mochachino cups ($8). I made the mistake of saving it up for the second half of the mild coffee custard gelato and focusing first on the crown of cream and cocoa nibs; the ganache set firmly in the tip, and sprayed messily when I stubbornly forced it.


N2's best trick was actually that they serve vegan options! The mango and lemon tea sorbets ($6) were clearly marked as such. Though it seems neither comes with toppings (one point to the LAB), we were really impressed by the mango's luscious texture and really-true-to-the-fruit flavour (two points to N2). 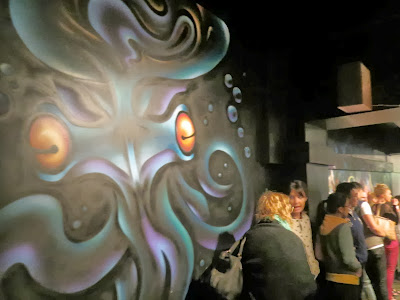 I will probably pop my head back in, hoping to try one of N2's more adventurous flavours, but they might struggle to beat Berrissimo up the street, where veg*ns have more control over what's in the mix.


You can read about our visit to the original Sydney store here.


Accessibility: I believe the entry was flat; the interior certainly was (at most there's one step on entry). Furniture inside consists of large wooden crates against walls and smaller, movable milk crates. There's plenty of space to move around unless the queue is out of hand. We ordered, paid and received our icecream at a relatively high counter. Toilets are individual, unisex and located on the same level - we didn't see inside them, but the doors were wide and we'd guess they were moderately spacious.
Posted by Cindy at 8:36 am