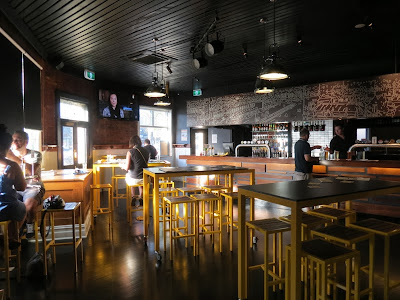 Fitzroyalty's recent post brought the Clifton Hill Brewpub to our attention. A new pub in the inner north with decent food? Straight to the top of our pub-club list. The Brewpub has replaced the old Clifton Hill Hotel. They've stripped out the TAB and tried to go a bit upmarket, brewing their own beer, fancying up the menu and adding some modern stylings to the fit-out. It's a huge venue - there's a front bar, a small side area where we sat and a huge carpeted dining space. We thought it must have once been a pokies area, but a bit of research suggests it was the old live music space. 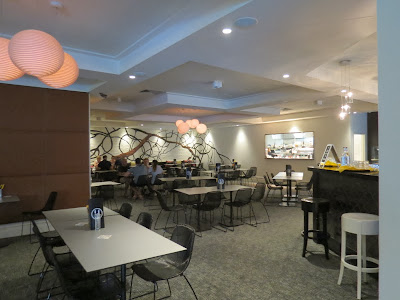 The veggie options aren't hugely innovative: eggplant parma ($18), a pasta bake ($24), a lentil burger ($17) and a whole bunch of starters and snacks. None of the three salads on the menu are vego and vegans will basically be stuck with chips (or maybe the lentil burger).

We started with a huge serve of chips ($7), which were crinkle cut and crispy and very satisfactory. 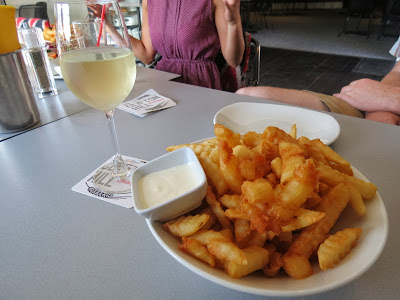 On top of that we ordered the vegetarian platter ($16 per person with a minimum of 2 people ordering). 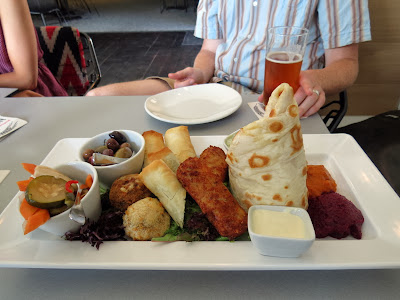 It more or less compiles the veggie starters from the menu: spinach and feta boreks; potato, blue cheese and walnut croquettes; olives; pickled veggies; crumbed feta and macadamia stuffed mushrooms; bread and dips. This was a bit of a mixed bag - the beetroot dip and the bread were quite nice but the pumpkin didn't really do much for me. The various fried goods were just okay - it's hard to go too far wrong when you're frying pastry and/or cheese - but they weren't amazing. The mushrooms were probably the pick of the bunch. The pickled veggies looked really sad, but Cindy said they were good (I focussed my attention on the olives).

Our dining companions were pretty happy with their meals (including a massive and massively cheesy eggplant parma) and their beer range is top notch. The service was a bit weird - they've  clearly got a bit of an issue about kids, offering a kids' menu but not high chairs, and were pretty concerned that our party's toddler was kept under close supervision despite there being almost nobody else in the pub. The whole experience was solid - not a rival to some of our nearby favourites, but not a bad addition to the neighbourhood.


Brian's very positive review at Fitzroyalty seems to be the only blog action at that the Clifton Hill Brewpub has attracted so far.

Accessibility: Not bad. There may be a small step on entry, but things are flat and spacious inside. There's full table service and the toilets are fully accessible.
Posted by Michael at 7:48 am