Before my work commitments took hold, James and Matt whisked me once more to Mt Gravatt for some of their favourite vegan eats in Brisbane. This time the venue was Loving Hut. It shares the same logo, spartan plastic decor and allegiance to Supreme Master as the Melbourne outlet; however, it's been around a little longer, offers freezers of take-home mock meat, and incorporates some Western dishes into the predominantly Chinese menu. 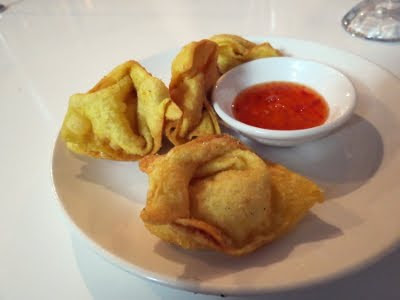 Again I took cues from Matt on what to order. I started with the daggy-fusion wontans, which were stuffed with vegan French onion cream cheese and served with sweet chilli sauce ($6). 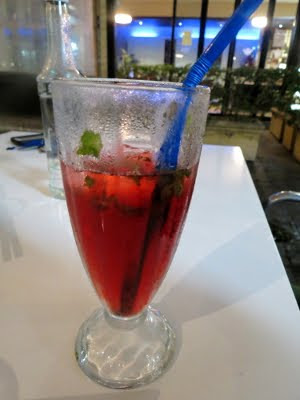 The rosella iced tea ($5.90) had the fruity hibiscus flavour I was nostalgic for (my Queenslander grandmother made killer rosella jam), but I didn't much care for the fresh mint garnish. 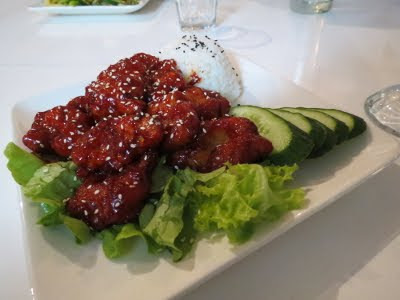 The Crispy Yum ($11.90) lived up to its name, much like sweet and sour pork with a proper sour kick - Matt reckons it comes from tamarind and I think he just might be right. The fresh green garnishes and mound of steamed rice round this out to a filling and cheap meal. (I'd happily pay an extra dollar for some sauteed capsicum instead of the wilting lettuce bed, though.)


James has a soft spot for the lasagne and amongst the curries and mock meat there's also spaghetti bolognese, mushroom carbonara, polenta and garlic cutlets. Everything is vegan, with gluten-free and onion-free options clearly marked. There are desserts, too, but they did not come recommended by my hosts.


While you can avoid the desserts, it seems that all patronising Loving Hut put themselves at risk of poor service. My dishes arrived promptly enough, yet James' wontans were served a perplexing 20 minutes or more later, and cold. Even then, James finished his two courses entirely before any of Matt's food arrived. A third unordered plate of wontans turned up and were turned away before we finished. It seems that haphazard delivery (and a trip out to the 'burbs) is the price you pay for a cheap mock meat meal in Brisbane.
____________


Accessibility: We accessed Loving Hut from a basement carpark via narrow stairs, but there looks to be some street-level parking and flat access from the footpath. The entry is very wide and the interior is flat. Indoor tables are moderately spaced, front outdoor tables were widely spaced. We ordered and (James again!) paid at a high counter, then food was brought out to us. I didn't visit the toilets.
Posted by Cindy at 10:04 pm