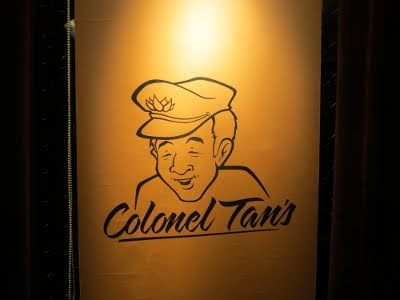 Every now and then, often while I'm indexing our restaurant posts, I feel a pang of guilt that we don't review more southside eateries. When we first moved to Melbourne we didn't know many people and the two of us would use our weekends to jump on trams down to St Kilda, Prahran and east to Richmond, even while covering the vegetarian essentials in Fitzroy. Now it's just too convenient to stop by our staple inner-north hang-outs with our (mostly) inner-north pals. But we're currently working on a little project that we're hoping will pull us south of the river more often in the next few months. 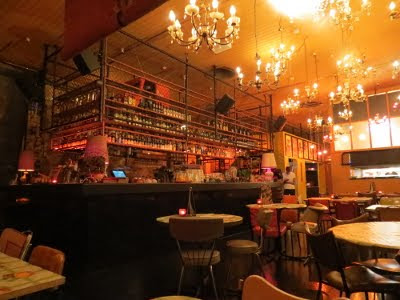 It pulled us first to Colonel Tan's. Years ago @melbgastronome and @eatingwithjack alerted us to their veg options, and it just never happened. I felt immediately remorseful as we climbed the stairs and entered the dining space. The glam-grunge style warmed my inner-north hipster heart, the availability of both couches and lightly padded retro chairs cheered my aging back, and the DJ's indie Brit tunes were literally and figuratively music to my ears. The cages around the DJ booth, upper bar and kitchen window hinted at the messy night club incarnation of this venue that I probably didn't want to stick around for. 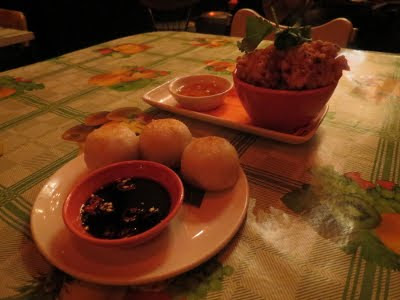 At 6:15pm we had our pick of the tables and plenty of time to linger over the menu, though the dining area filled rapidly around us. It's twisted Thai on offer - chicken and bean curd are stuffed into "Chiko rolls", bolognaise gets a Bangkok makeover and pork souvlakis are dressed with garlic, chilli and soya bean sauce. Dietary features aren't marked but the menu's about one-third vegetarian, skewed towards the entree end. Vegans should do OK, and coeliacs would need to focus on the curries and stir-fries.


We started out with sweet potato and cashew dumplings dipped in chilli soy (foreground, $12.50) and corn and coriander fritters smothered in sweet chilli (background, $9.50). Both had lovely tender textures, but relied almost entirely on their condiments for flavour. 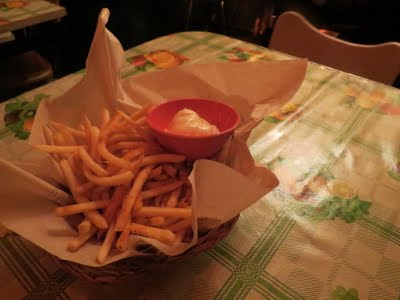 Given the portion-to-price ratio of our entrees, we would never have predicted the bounty of chilli-salted fries to be had for $5.50. There was plenty of mayo for dunking, too, so they had us feeling pretty chipper. 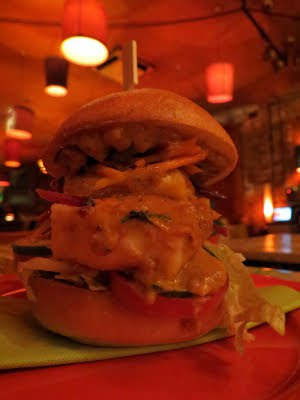 The most fusion-fied of the vegetarian dishes is the tofu Whopper with peanut sauce ($9.50). It'd be no less difficult to eat it on your own than it was to divide between the two of us - the somewhat silken battered tofu slides between layers of tomato, cucumber, lettuce and carrot, and there's peanut sauce everywhere your fingers want to be. It's a likeable burger, but it could do with a little more heat. 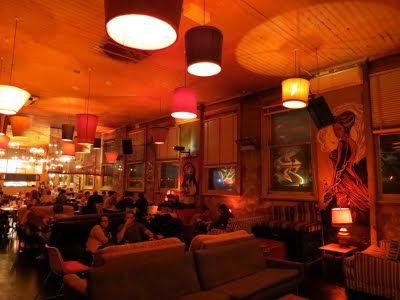 Colonel Tan's lined up a lot for me to like - a comfy spray-painted space, cocktails, mocktails and a fun mash-up of a menu - but the food didn't quite make the final smack-down.


We appear to be in the minority with our meh food feelings! Colonel Tan's comes recommended by fellow vegetarian The Big V, plus omni blogs I'm Hungry, I'm So Hungree, please sir, can i have some more, Travelling in Mary Janes, MEETOO, The Misadventures of MissC, Hedonistic Habits, Dangerous Duplicity, Extra-ordinary Ordinaries, melbourne gastronome, paleo dining, The Secret Life of a Chef's Wife, The Chommery, the wrong beginning, Nurikko Visits, Popcorn & Toast, theworldofIRA, Kish + Co and Spaghetti Blogenese. Poor service soured visits from eyes on the fries and Let Me Feed You Melbourne.
____________


Accessibility: Colonel's Tan's is accessed via two flights of stairs, and I'm not aware of any alternative entries. Inside it's poorly lit and loud, with a mixture of reasonably spaced couches and tables. We received full table service and didn't visit the toilets.
Posted by Cindy at 9:51 am