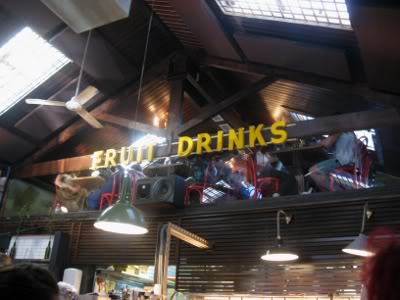 We don't get to the Vegie Bar often, though I've had a couple of meals there since our last post - I remember a terrible pizza and a better pie with chips and salad. Carla can't stop blogging about the raw options they've started offering in the past six months so on a hot lazy night we were compelled to stop by for a quick meal.
One thing hasn't changed about the Vegie Bar - it is loud and crowded. We were crammed onto the communal table and while the staff attending to us were friendly, we were not inclined to linger. 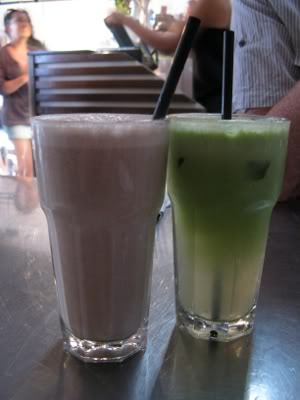 Eager for some hydration, Michael ordered a Vitality juice (apple, celery, ginger, cucumber; $5.50) and I tested the raw shake (cacao, agave, almond milk; $7.50). They arrived long before our food and we struggled to nurse them through. This, despite barely enjoying my shake - it was full of blended almond bits that caught in my throat and didn't taste much of cocoa at all. I wouldn't buy it again. 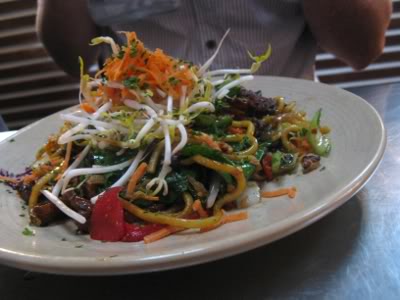 Once he saw the (HOT!) warning, Michael was all about the Sambal Noodles ($15), a wok-tossed mixture of mock duck, veges and noodles in hoisin sauce and sambal. They weren't as hot as he'd've liked, though Michael did like the duck - it's the kind of meal that we're known to make at home. 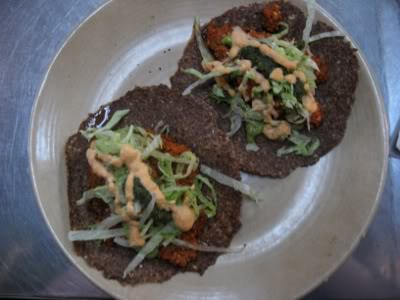 I gave the raw tacos ($12) a shot. The dehydrated 'shell' is tasty but not quite pliable enough to take in hand, and it'll disintegrate the millisecond it comes into contact with water. So I awkwardly shovelled it all down with knife and fork - the 'mince' was surprisingly spicy and hearty, cooled a little by the iceberg lettuce strips and the guacamole; and the flavour-charged condiments (pine-nut sour cream and coriander and mint relish)  almost stood up to the 'mince'. Klutzy consumption aside, I liked this - it was satisfying and reasonably priced.
Settling the bill took far too long - it doesn't seem efficient have departing customers queue with the new arrivals out the front - but this gave us time to gaze at the dessert display and pick two slices to take home. They were enormous, well priced, simple and sweet.
It's cool to see the Vegie Bar adding some interesting raw options to an already diverse vegetarian menu, even as their customer base seems to broaden well beyond the veg*n community. I just find the hustle a hassle.
____________
You can read about many of our previous visits to the Vegie Bar: one, two, three, four, five, six.
This restaurant gets a lot of blog attention. Carla's covered the raw menu as comprehensively as she can, and raw items also appear in posts on Wayfaring Chocolate, In The Mood For Noodles and The Healthy Party Girl. Other positive write-ups appear on veg*n blogs soya et chocolat, Vegematarian, Ruby's Vegan Blog, crosslegged on the front lawn, Melbourne Vegetarian Reviews, Nouveau Potato and Black Bunny Carousel (though they've sworn off the place for a while). The Vegie Bar served Steph a pretty meh pizza; it's happened to me too.
Accounts from more omnivorous bloggers tend to be positive (see Who Told You That?, justframeless, Naturopathic Eats, Almost Always Ravenous, Melbourne Foodie, Gastrology, Richard Elliot's Blog, We Rate It, Let Me Feed You, We Dare Food, Aggofato, The Food Complex, let's get fat together and angelkhong) though there've been a few mixed and negative experiences (on Miss Adriennely, mochii eats [twice] and Cherry The Chef).
____________
The Vegie Bar
380 Brunswick St, Fitzroy
9417 6935
veg meals $5-15
http://www.vegiebar.com.au/
Accessibility: The Vegie Bar has a flat, wide entry but pretty crowded tables. Orders are taken at the table and bills are to be paid at a high counter. We haven't visited the toilets.
Posted by Cindy at 8:09 am