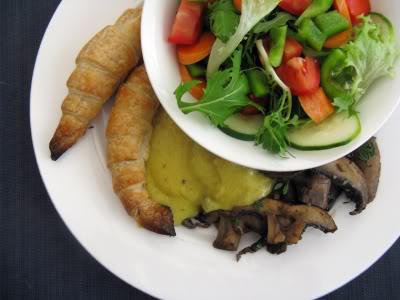 Well, foolhardy ol' me set myself the task of veganising and de-glutening this year's calendar recipes. January was a cinch, February was more success than failure, and March just about defeated me before I'd even begun. Croissants - little more than butter and flour - are surely the antithesis of a vegan, gluten-free diet. I ditched my gluten-free aspirations and focused on a vegan rendition. Here's what I came up with:
Croissants: Croissants are just puff pastry, right? So why not use Borg's excellent vegan puff pastry for the job? I watched Emmanuel Mollois roll croissants on Poh's Kitchen a few weeks ago and figured I could give it a shot. (You can watch it too - it's at the 14-minute mark in the Family Favourites episode, archived here.) Mine were nothing special. Their shape was just barely evocative of a real croissant, and they were compact and heavy. Chewy, even. Fail.
Mushrooms: I stayed relatively true to the original recipe, just replacing the butter with Nuttelex and omitting the cream altogether. They were still delicious.

Brie: I wasn't in the mood for elaborate vegan cheese-making, and instead thought that Vegan Brunch's cheesy sauce might be a nice alternative (even if it doesn't resemble brie in the least). It's a fab sauce, but ultimately I didn't really think it matched the mushrooms.
Not a meal worth repeating. Still, there were enough pleasant (if mis-matched) elements here to contently eat my way through what I'd cooked. And I reckon experiments like this one are doing me and my cooking skillz more good than harm.
____________

Mandee's been going mad for vegan, gluten-free French food recently - check out her culinary creations here (including croissants!) and here.
Posted by Cindy at 2:39 pm