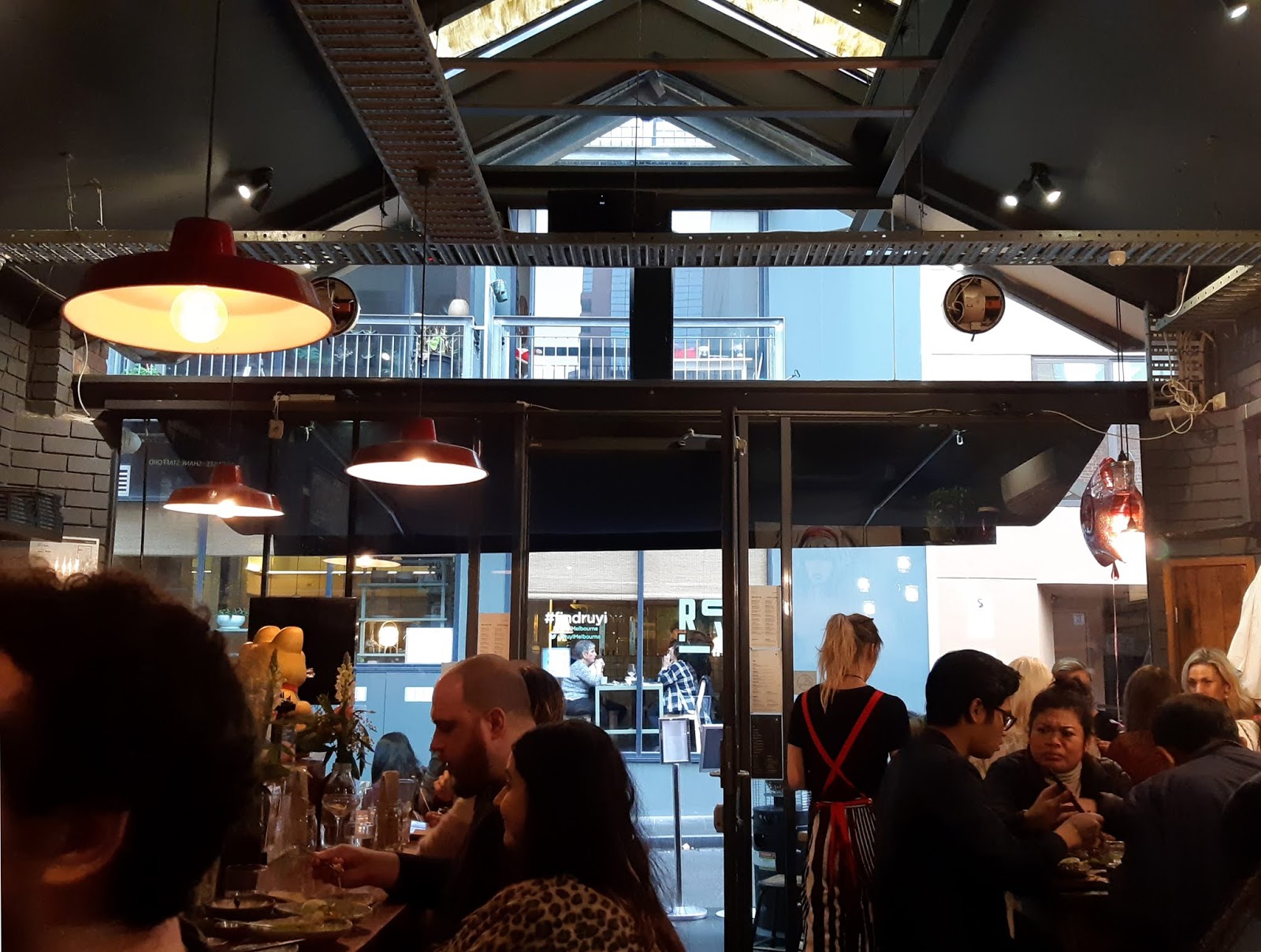 We went hard at the Melbourne International Film Festival this year! I was expecting this to mean hasty stops for dumplings, street-side crepes and Lord of the Fries between sessions but we actually had several more leisurely sit-down meals. Our friend Jess organised a booking for Rice Paper Scissors, which we hadn't previously bothered investigating for veg*n options. As Jess well knew, there's actually a clearly marked vegan section to their menu (with gluten-free dishes also marked), and were able to sample almost all of it between the three of us. 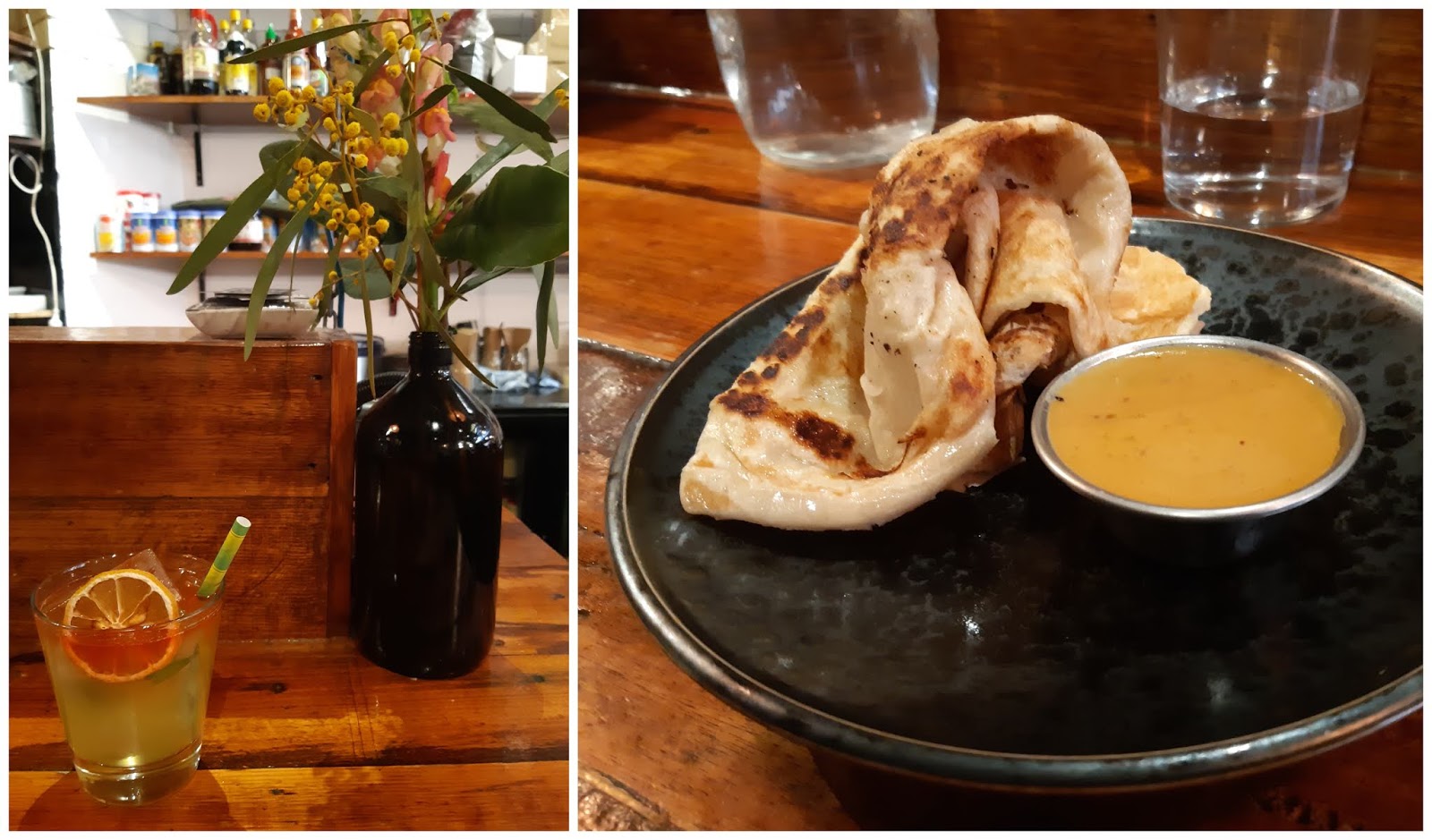 The two things I most liked about the menu arrived up front. First, there's a list of six mocktails on the drinks list - I ordered a Yuzu Can't Touch This ($9.50). Second, the roti is vegan-friendly! We ordered two of them with peanut dipping sauce ($7 each) to celebrate. 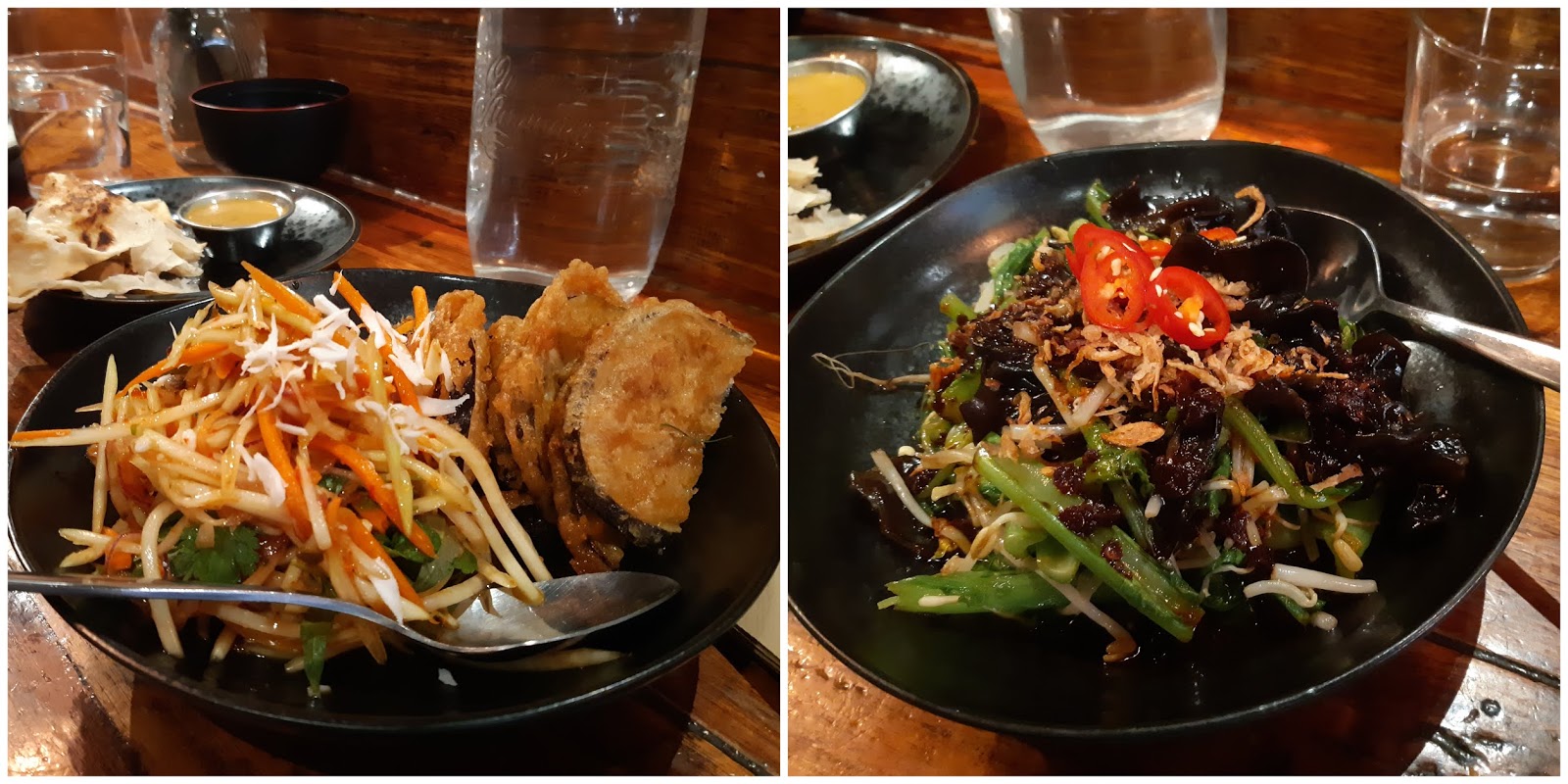 Half the vegan menu includes the word 'salad', but they proved to be varied and substantive dishes that do the word proud. The tempura eggplant salad ($14, above left) arrived first, with the battered pieces keeping crisp alongside julienned green mango, chilli, coconut and herbs. The Asian greens ($13, above right) looked pretty salad-y too, with wood ear mushrooms, bean shoots and ginger sauce. 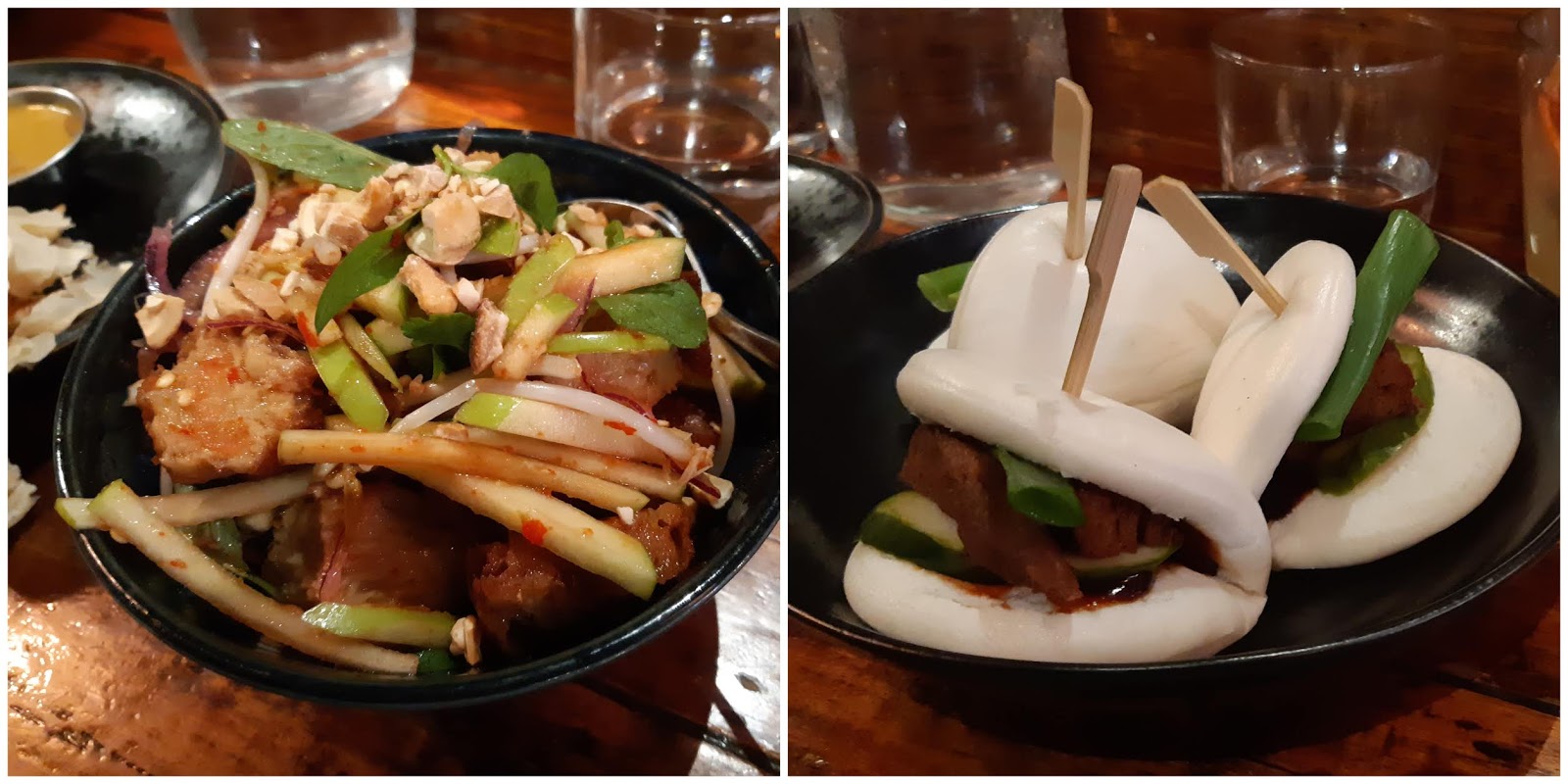 The smoked tofu had us doing a double-take - its density and texture was more like a mock-meat (or even possibly a real meat) than regular bean curd! It popped up in generous, marinated chunks in both the crisp, tangy green apple salad ($14, above left) and the sweet, saucy bao (~$7 each, above right). These were probably my two favourite dishes of the day. 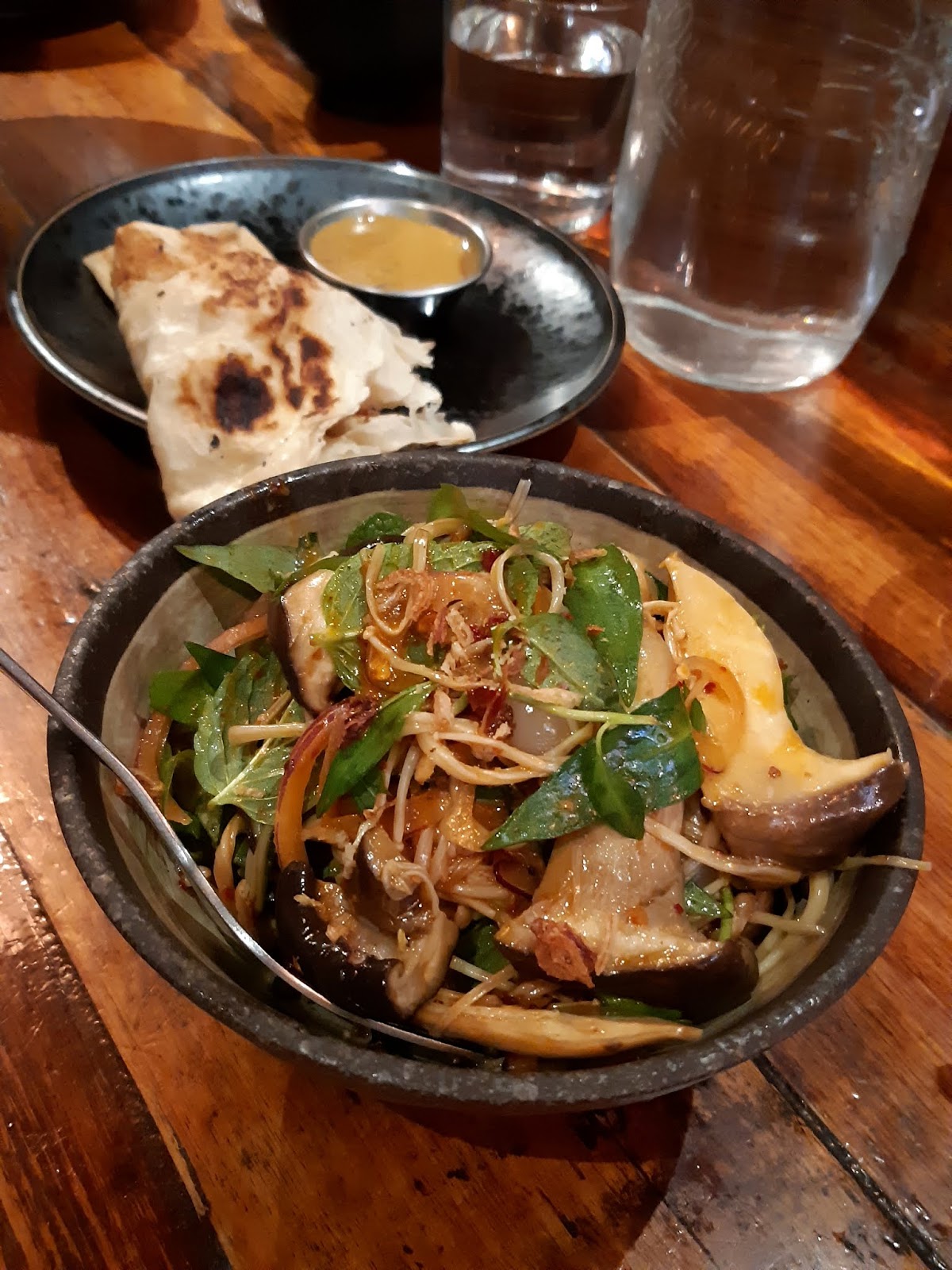 The mushroom salad ($14) featured all sorts of barbecued funghi; I overlooked the banana blossom and rambutan here as a consequence. 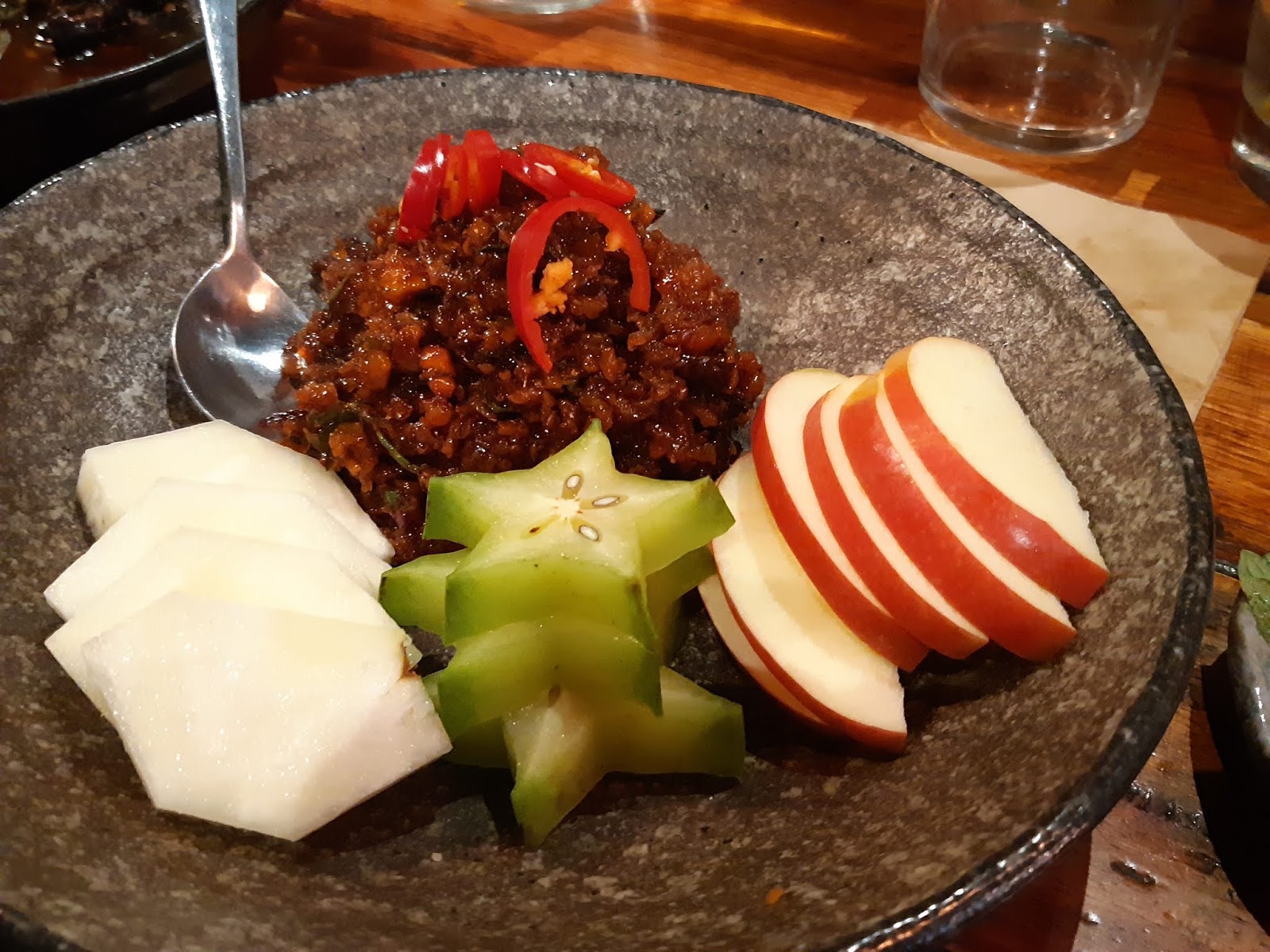 We had a big wait after our salads were done. We were full, took a while to notice that we were missing a dish, and weren't inclined to remind the staff about it. Actually, they'd deliberately paced the ma hor ($12) for us. It was great to receive fresh fruit at the conclusion of our meal, piling it with a caramelised five-spiced tofu and peanut 'mince' as best we could.


The dessert menu's an interesting one, though sadly not so vegan-friendly. No matter - we were well looked after by a vegan staff member and clearly had no end of sweet, sour and savoury vegan mains to enjoy. The only downfall we experienced at Rice Paper Scissors was its interior design - it's densely packed, its seating doesn't include back support, and it's noisy. We'll choose carefully when and with whom we make reservations there.


Yoshiko has attended a vegan degustation at the Fitzroy restaurant - it looks like these still occur with some regularity.
____________


Accessibility: Not high! It's loud and crowded, with a mixture of high and low tables and stools (I don't think any of the chairs had backs). We ordered at our high bench and paid at an adjoining high bench. We didn't visit the toilets.
Posted by Cindy at 9:23 pm