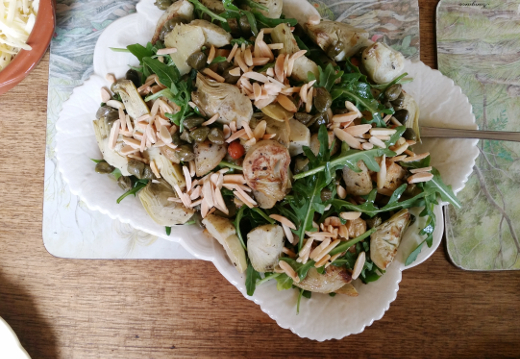 This is a salad that we've been enjoying for several years, thanks to Smith & Daughters. It's been on a couple of versions of their dinner and brunch menu, and it's also in their cookbook. It's hearty and hardy and pickley and just a bit toasted, something that works both as a side and as a main dish on its own.

The original version pairs artichoke hearts with Jerusalem artichokes; I've gotten lazy about the root vegetable and just use regular old potatoes instead. My two other convenient pantry swaps are dried thyme instead of fresh, and maple syrup instead of agave.

This is the second or third time I've prepared it to share at a friend's house. It's usually tough enough to travel in its final serving state, but this one had a two and a half hour train journey between prep and presentation so I got finicky and packed many of the components separately. Rocket: in its own bag. Almonds: lightly roasted then jarred. Roasted potatoes and paprika chickpeas sharing one lunchbox, charred artichoke hearts and capers in another. Lemon-cumin dressing: jarred and ready for a last emulsifying shake before pouring. It was worth the effort to preserve all those textures, and the entire salad was happily demolished in a sitting, making the train trip home all the easier.

Drain and rinse the chickpeas, then spread them out in a small-medium baking tray. Drizzle over the some olive oil, sprinkle in the paprika and add a little salt. Stir well and bake for 20-30 minutes (mine never really crisp up as promised).

This is a good opportunity to toast the almonds in a separate small baking dish. There's no need for oil! Just keep an eye on them to avoid burning - they'll only take about 5 minutes.

Scrub the potatoes and slice them into cubes, skin on. Place them in a large baking tray, drizzle them with olive oil, then add the thyme, plus some salt and pepper. Toss everything together, then bake the potatoes until tender, 30-40 minutes.

After the almonds are out of the oven and cooling, There's probably enough time to make the dressing. Place all of the ingredients in a lidded glass jar and give them a thorough shake.

When it's time to serve, layer up the rocket, potatoes and chickpeas, artichokes and capers, then the almonds. Pour over the dressing and lightly toss everything together if you have the space.
Posted by Cindy at 2:19 pm