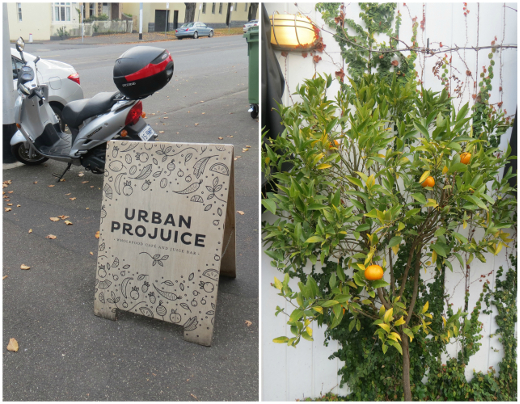 Michael arrived home on the weekend, and made sure to keep active and out in the sun during the days to stave off jetlag. This was a great strategy when we crossed the river to Urban Projuice for lunch - there was a wait for indoor tables but plenty of free spots out back.

The menu is varied and vegan by default: a couple of dishes include optional eggs, but there's no meat or dairy. Gluten-free folks have abundant well-labelled options too. It's all wholefood-oriented and scattered with the trappings of our time: an acai bowl, granola that's paleo, crushed avocado served on 'toasted raw sprouted bread' (...so is it raw or not?). But those of us seeking carby comforts aren't completely left out: there are pancakes, a baked sweet potato garnished with corn chips, and a vege burger.

Beyond the espresso machine there are $10 smoothies, turmeric lattes and something called a Coconut Bomb. Michael confirmed that they do the classics well with a flat white ($4), and I approved the hot chocolate ($4.50, both Bonsoy-based). 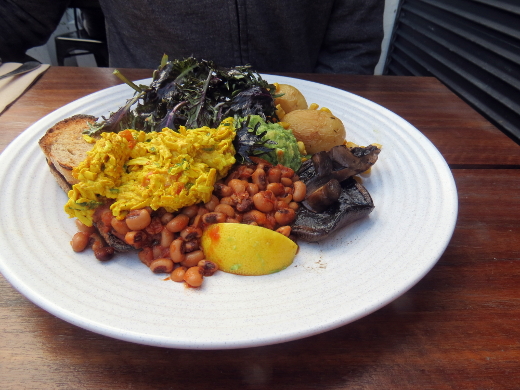 Michael went on to order the Big Breakfast ($21), even though he was skeptical that the tofu scramble would be up to much. He was happily proven wrong with this brightly coloured and flavoured batch, shovelling it down with the plentiful baked beans, mushrooms, roasted little potatoes, avocado, kale salad and toast. 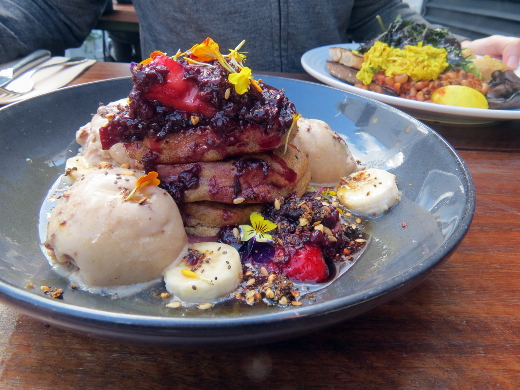 I was predictably drawn to those pancakes ($19.50). They're cakey, deceptively gluten-free, and dressed up to the nines with bananas and berries, maple syrup, three scoops of icecream, a sprinkling of seeds and edible flowers. Every component was terrific, although I found the overall effect to be excessively sweet. 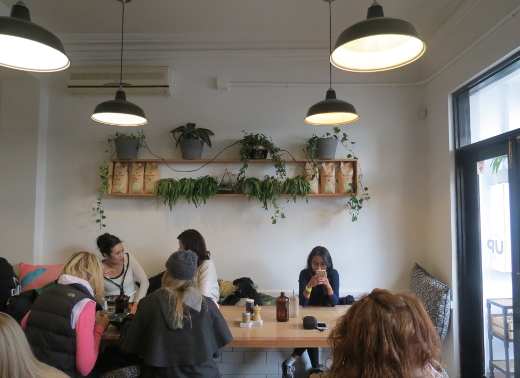 Urban Projuice is aimed at the instagram-wellness-smoothie set, but I think its appeal is broader - only the ugh, no bacon?! crowd are likely to be disappointed. It's not often we're willing to queue up southside for a meal and the prices are a little steep, but it was worth making an exception once for this cafe.


Accessibility: This terrace house has several steps up on entry and densely packed tables. We ordered at our table and paid at a low counter. We didn't visit the toilets.
Posted by Cindy at 10:25 pm