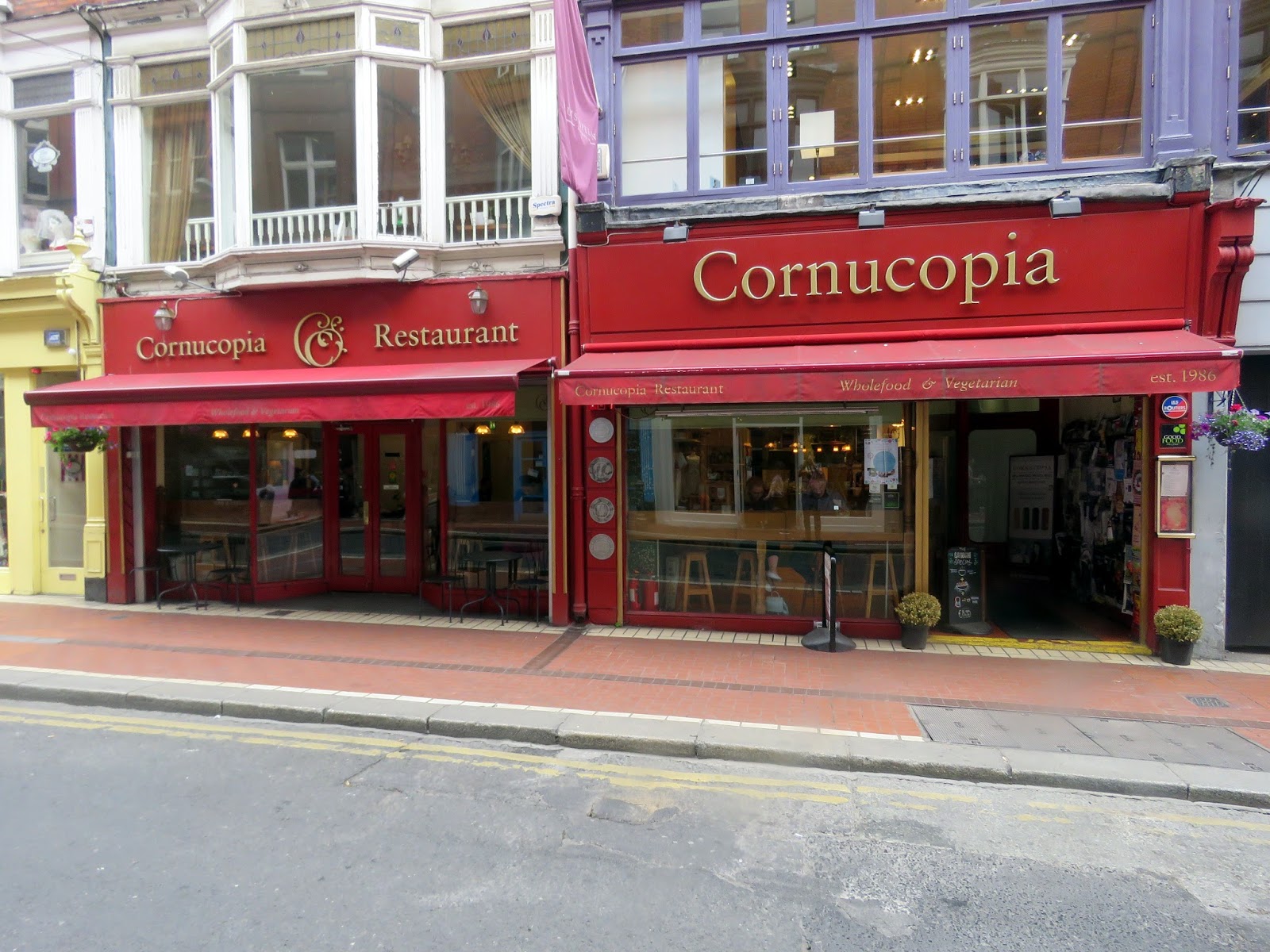 I was lucky enough to spend a few days in Dublin last week for work. There wasn't a lot of time for sight-seeing, but I managed to squeeze in trips to a couple of the veggie places in the city. I started off with dinner at Cornucopia, a 30 year old restaurant right in the middle of town. 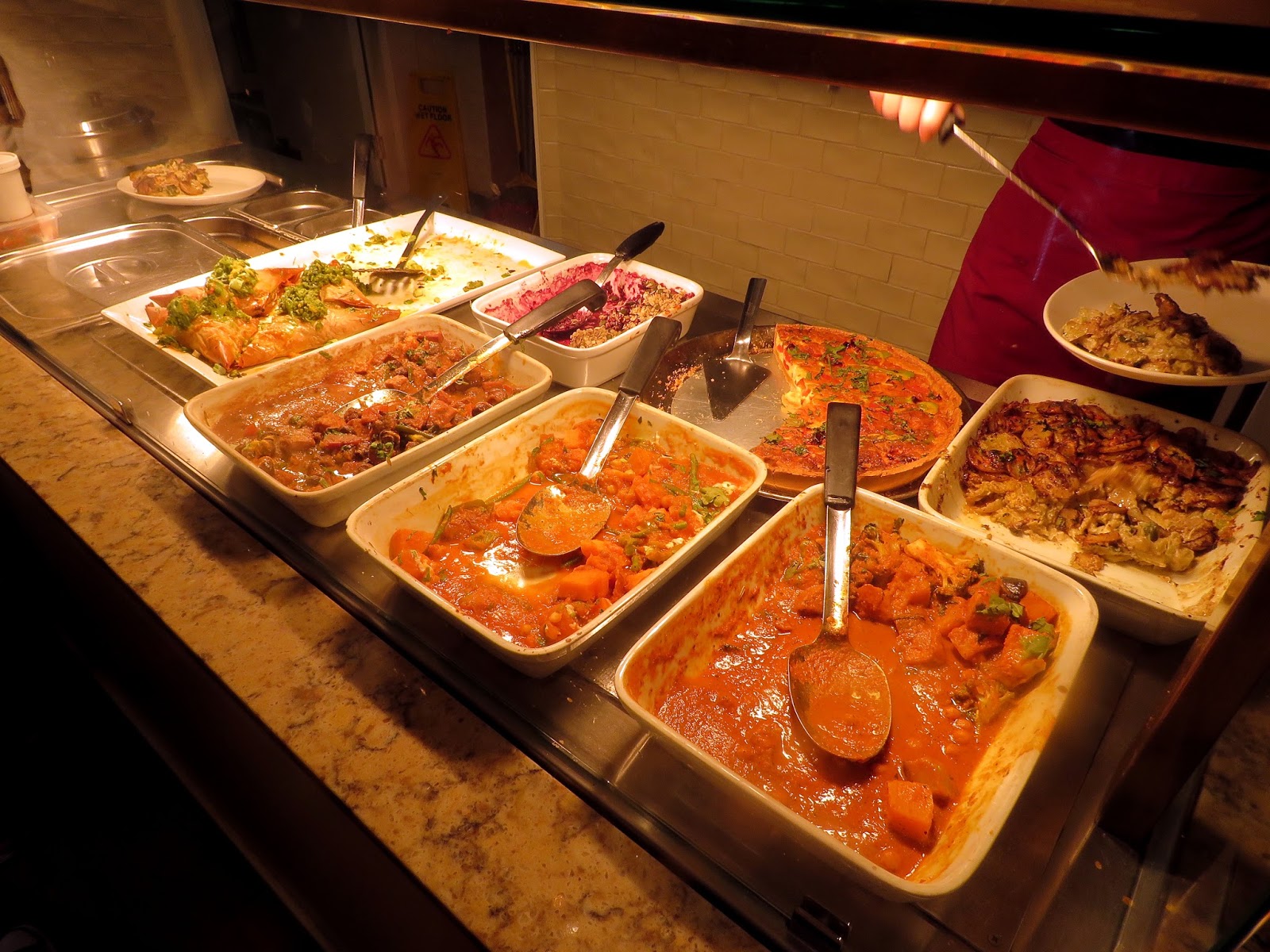 It's a pretty straightforward place - you get your choice of main and a couple of salads for €13.50 (~$20). The night I visited there were options like tagines, hot-pots and quiches - I picked the hot pot, with cauliflower, zucchini and fennel potatoes, accompanied by farro and beet salads on the side. 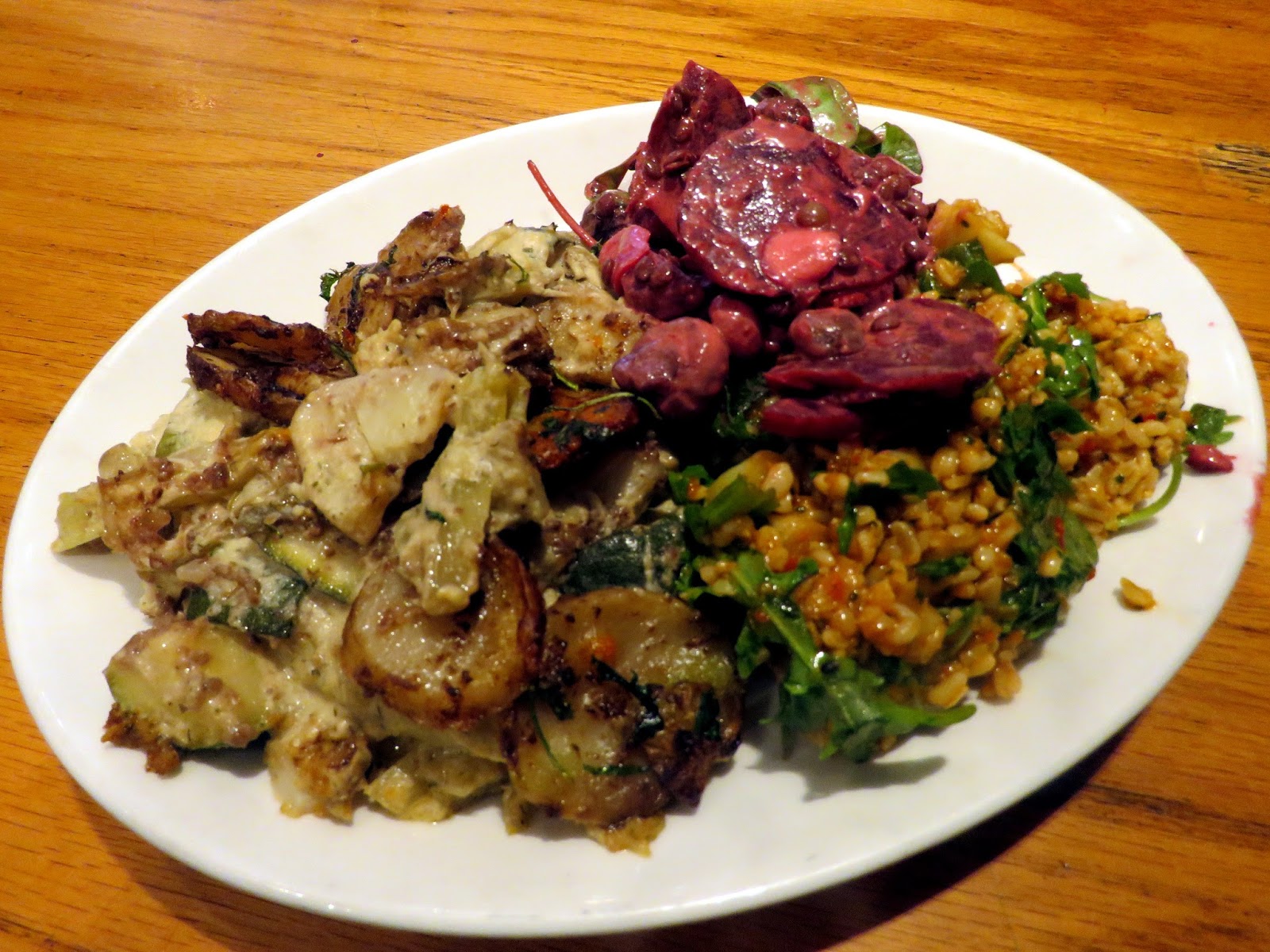 This is hearty, old-fashioned vego fare. The plates are massively loaded down with food and it's tasty and a bit stodgy. Nothing innovative, but a satisfying experience nonetheless.
I was impressed enough to head back for a pre-conference breakfast one morning. You get your choice of five items plus toast and coffee for €8.95 (~$13.50). I went with beans, scrambled tofu, a hash brown, a homemade sausage and roast mushrooms. 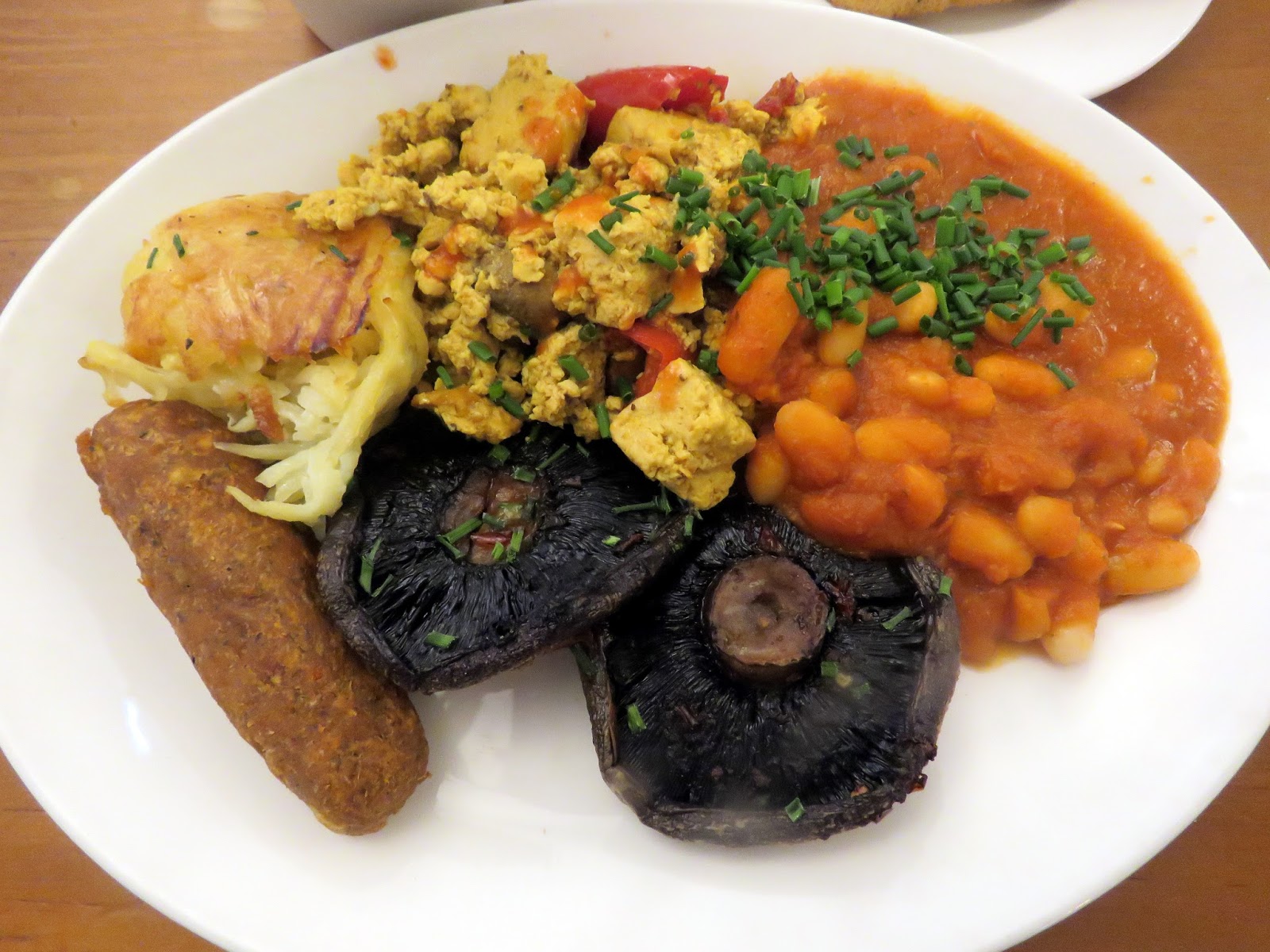 This wasn't a complete success -  the hash brown was a bit soggy and the tofu wasn't bursting with flavour, but the mushrooms and beans hit the mark. It's another impressively large plate of food too, so you won't need to eat lunch.
Cornucopia are doing a good job of providing reasonably affordable and hearty vegetarian food in the middle of the Dublin tourist strip - it's not somewhere that will change your life, but it's a reliable place for big plates of tasty vego food. Worth a look.
_____________
Cornucopia
19/20 Wicklow St, Dublin, Ireland
+353 1 677 7583
menus: breakfast, dinner
http://www.cornucopia.ie/
_____________
For my other free meal, I headed south of the city to check out Sova Vegan Butcher in Portobello. I was expecting something trashy and mock-meat heavy, but it turned out to be much classier. They call themselves a vegan butcher because they make their own seitan, but the menu has a range of non-mock options as well. The best way to try things out is to order the set menu - an entree, main and dessert of your choosing for €24.90 (~$37).

I started out with the king scallops with beurre blanc sauce, dill potato cakes, marinated cauliflower and a black pudding crisp. The scallops are fat mushroom stalks, dotted with kelp caviar and the black pudding is seitan-based. This is a really wonderful dish for showing off the beautiful flavours of the vegetables, but the salty, smoky seitan-crisp really stole the show for me. 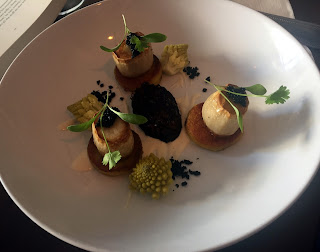 For my main I decided to embrace one of the meaty options, ordering the porc medallions with mustard jus, tarragon crust, buckwheat and jerusalem artichoke risotto and steamed baby veggies. 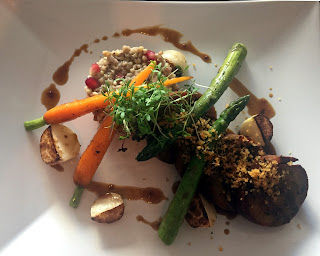 This was another hit - the seitan pork was really excellent (almost up with Cindy's version) and you could tell that real thought had gone into the combination of sides and sauces. Delicious!
I finished up with a jar of their lime cheesecake. This was the least exciting of the three dishes, if only because vegan cheesecake is such a ubiquitous offering these days. This version had a strong lime tang and a lovely texture, but I should have been braver and ordered the choc avocado mousse. Next time. 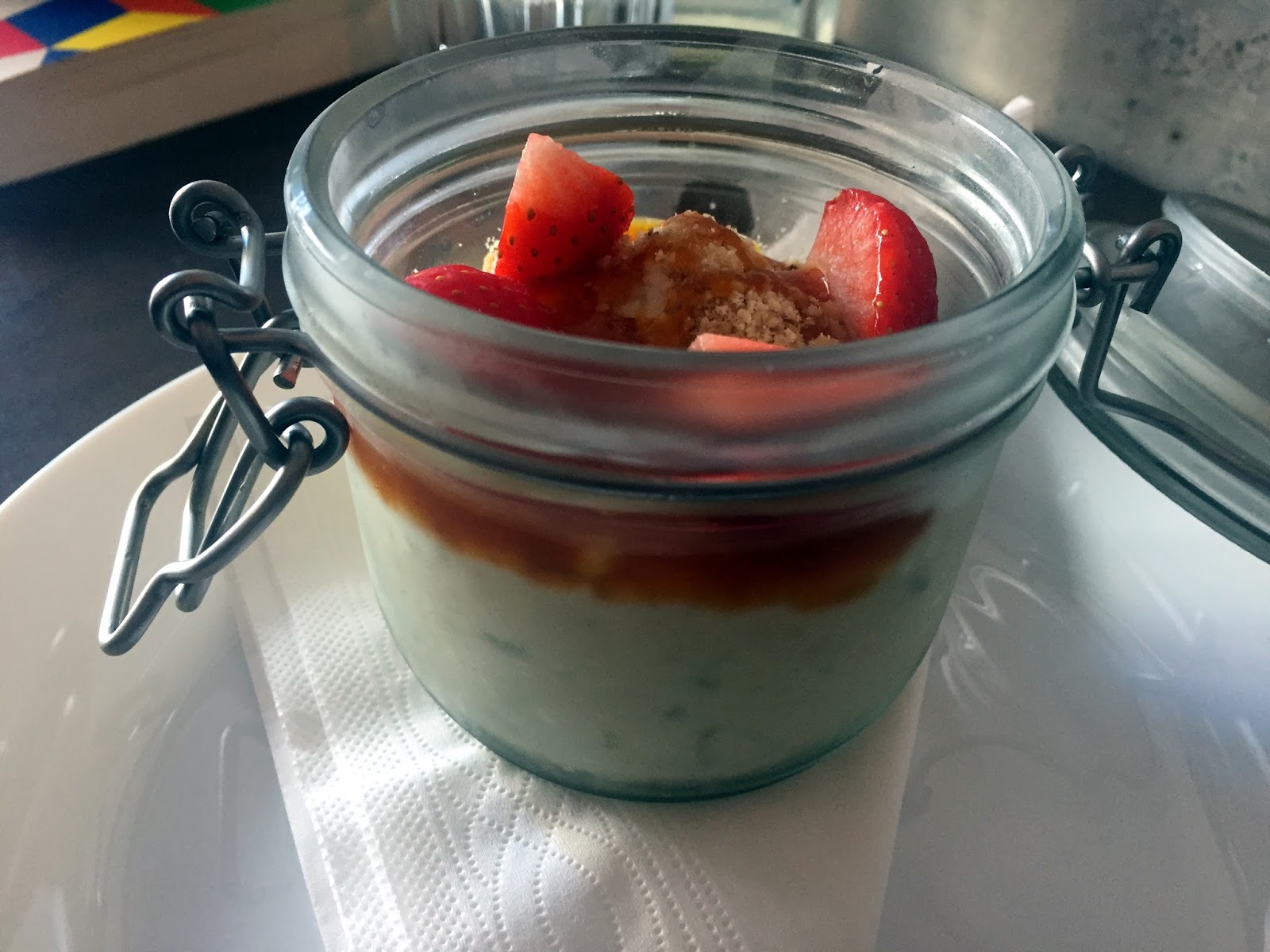 Sova is really wonderful - friendly staff, interesting food and a lovely atmospheric buzz (at least on a Wednesday night). This should be the #1 priority of vegos and vegans visiting Dublin - it's fabulous.
_____________
Sova: The Vegan Butcher
51 Pleasants Street, Dublin, Ireland
+353 85 727 7509
menu
facebook page
Posted by Michael at 3:30 pm