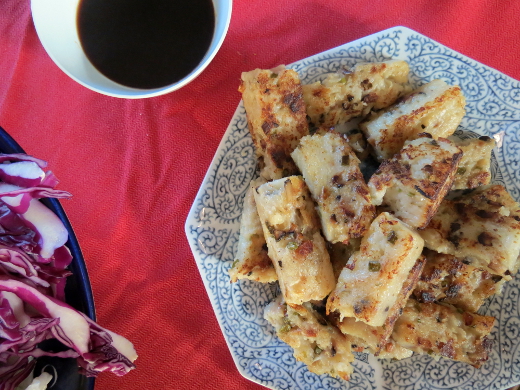 Steph hosted a potluck on Sunday night to mark the end of Chinese New Year celebrations, with dishes needing to be vegan and on-theme. Last time we had a CNY potluck I had a memorable dumpling failure, so I was keen to come up with the goods this time around. I still aimed high - deciding to make a first attempt at turnip cakes for the occasion.

It's a bit of a rigmarole - you need to grate and cook daikon, fry some fillings and then make a big loaf that you steam for an hour or so. Our situation was made a bit harder by the lack of a proper steamer in our house - the saucepan/colander solution we came up with worked okay in the end, but it increased my anxiety substantially. Our substitutions: mock jerky for sausage and vego belacan for dried shrimp worked fine, and these fried up a treat in Steph's excellent frying pan (they stuck pretty badly when I tried a couple of test ones at home). 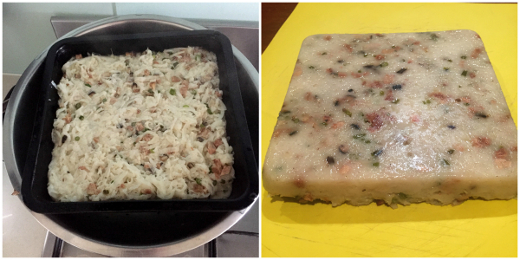 I didn't trust the texture to hold up if I made traditional rectangle-shaped cakes, so I went for slightly smaller shapes, which held together well. They turned out a complete success - the high ratio of daikon to rice flour meant that they had a nice rich flavour and they were an absolute delight once dipped in veggie oyster sauce.

Cook the grated daikon with the water in a large saucepan for about 20 minutes. The daikon will leech out some liquid - you want to boil it off as best you can, so there's only about 3/4 of a cup of water left.

Put the daikon aside to cool for a while.

Heat the oil in a frying pan and stir-fry the jerky, mushrooms and garlic shoots for 5 minutes or so, until everything's nicely fried. Stir through the belacan.

Once the daikon has cooled a bit, stir it together with the rice flour, cornflour, salt, sugar, white pepper and fried fillings. Leave to sit for 15 minutes and then pour the filling into a baking dish - we used a square one about 20cm x 20cm.

Steam the mixture in the tray for 50 minutes to an hour - even after an hour ours didn't seem like it was quite set, but once it cooled down it was fine.

We left our loaf in the fridge overnight to set properly, although I imagine it would have been fine after half an hour or so.

Slice the loaf into small pieces for frying. Fry in a generous splash of oil for about 5 minutes, until everything has browned up nicely. Serve, with a bowl of vego oyster sauce for dipping.
Posted by Michael at 4:08 pm