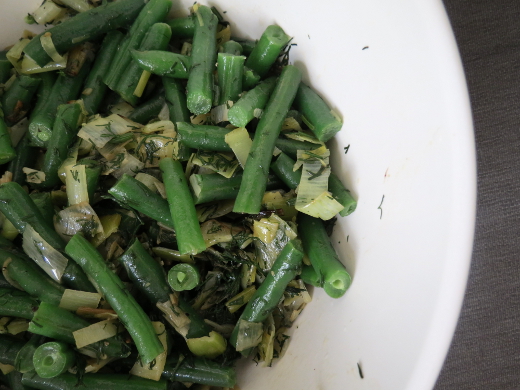 We were lucky enough to be invited to a friend's big Thanksgiving shindig on Sunday. She's an expat American and goes all out each year, with a massive meal and loads of lovely guests. To make catering for twenty-something people possible, Thanksgiving was potluck-style, with everyone chipping in side dishes, booze, sweets etc. Cindy claimed a dessert slot (post coming soon), so I settled for something savoury.


Cindy pointed me in the direction of Heidi Swanson's veggie thanksgiving roundup and I picked out this super simple green bean salad. It's stupidly easy to make - five ingredients (including salt and oil!), a bit of chopping and 5-10 minutes of cooking and you're done. The recipe below is what you'd do if you were going to serve it up straight away. Because we were cooking it earlier and taking it to lunch, I didn't put the beans in the frying pan, but blanched them separately for a minute and then cooled them down, before combining them with the dill and leek later to avoid over-cooking.

It was an excellent addition to the heaving table of food at the shindig - the dill is the most powerful flavour, with the caramelised leek and crispy beans combining perfectly. A scoop of these alongside a plateful of Tofurkey, mashed potatoes, peas, roast veggies, pasta salad and tamales completely converted me to a Thanksgiving traditionalist. 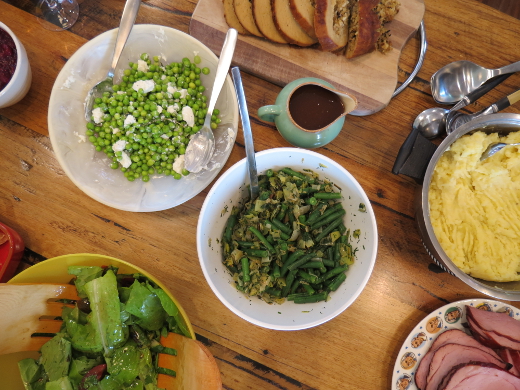 Green bean salad
(adapted from a recipe on 101 Cookbooks)

Heat a decent splash of olive oil in a frying pan and stir in the leeks, cooking for 10 minutes until they've browned up a bit and softened. Stir them regularly, but not constantly.

Throw in the dill and the beans and cook for another two minutes. If you're not serving the salad straight away, then don't throw the beans in the frying pan - instead blanch them in boiling water for a minute, drain them and run them under cold water so that they keep their snap. You can combine them with the leek and dill later.

Season generously with salt and serve immediately.
Posted by Michael at 7:42 am