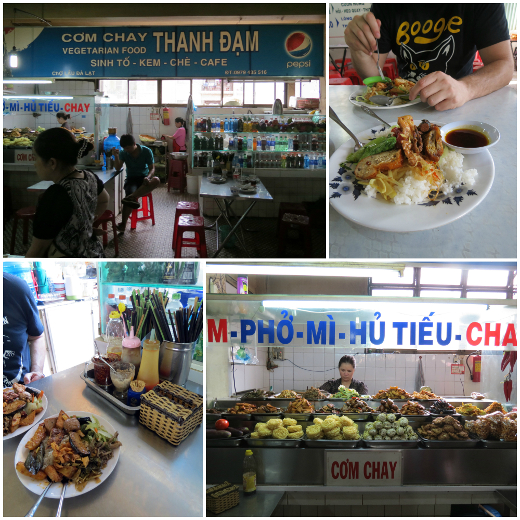 We've made an escape from wintertime Melbourne to Vietnam and Malaysia for a couple of weeks with our mate Clamps. He's eaten vegan through this part of the world several times before, so he's the ideal IRL complement to our usual Happy Cow research.
The major revelation has been seeking out cơm chay in market food courts. This translates as vegetarian rice, but you can expect much more than that. Stalls routinely offer a dozen different vegan-friendly pickings on their set plates, from pickled vegetables and braised mock meats to deep-fried fritters and tofu triangles. The ones pictured from the Đà Lạt market set us back 30-40,000VND (AU$1.80-2.50) per plate and were spectacular. With only a limited ability to interact with staff we were left to guess at how many of these dishes came together - were those crispy bits some kind of fried root vegetable, or processed soy? could those mock anchovies be battered banana blossom? what are the chances of us making our own fake shrimp meat to wrap around lemongrass stalks? We can only hope that cơm chay will be the next food trend in Melbourne. 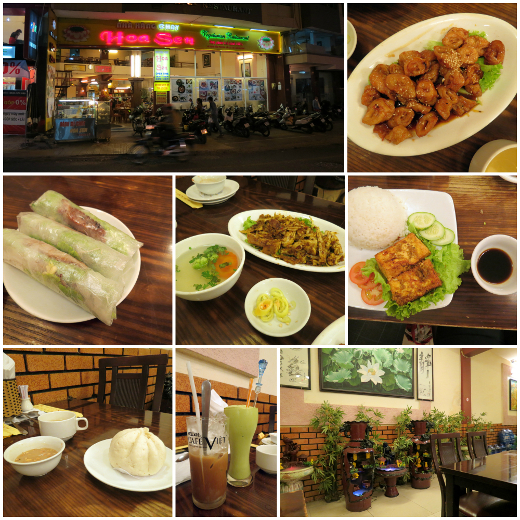 Đà Lạt has a handful of other veg*n restaurants, all variations on the local Buddhist cuisine. Hoa Sen is one of the more expansive ones, with lacquered tables and decorative fountains. The menu included English translations, usually clear, although we wondered what the 'pies' were that featured throughout the menu. There was only one way to find out! The 'fried pies with lemongrass and hot pepper' (pictured above, centre) turned out to be some very tasty shredded mock meat, rivalled only by the chilli tofu rice (above, centre-right). Fresh spring rolls, a soft bready dumpling and a plate of braised gluten were also very good. (Main dishes were 35,000VND ~ AU$2.15 each.)  Michael and I took advantage of their cold drink repertoire too, with a condensed-milk Vietnamese iced coffee for him and a soft serve-like avocado shake for me. For two nights we stayed at the lovely Thien An Hotel (which includes a complimentary breakfast of baguettes and tropical fruits, with a jar of Vegemite on offer!). We couldn't believe our luck when we spotted a bánh mi chay stall two doors down, and an entire vegetarian family restaurant Quán Chay Đại Lộc behind it. (Main dishes were 20-40,000VND ~ AU$1.20-2.50, banh mi 10,000VND ~ AU$0.60.) A few of the dishes we sought were unavailable, but the ones we hit on were terrific - I had mock fish with lemongrass sauce one night and a peppery tomato braise the next. Michael loved the beef noodle soup so much that Clamps was moved to order it on a subsequent night. Fried spring rolls are common place, but these ones were particularly toasty and enjoyable.  Michael and Clamps even stopped in for breakfast banh mi in between, but were mildly put off by the gelatinous fat on their mock meat filling. I thought the corn milk was a better punt, sweet and refreshing.
Of course we found plenty else to do between eats (see slideshow below for some highlights). We browsed the central markets several times, Michael went on a bird-watching tour while Clamps and I walked around the lake and visited the flower park. We took a taxi out to the Crazy House and Bao Dai's Palace before being drawn back to the central market for more cơm chay. Mostly we revelled in the cooler days up in the mountains before returning to the steamy cities below.
Posted by Cindy at 8:28 pm